For five days last week, Hamdy Qatamish, the muezzin of Arish’s Kawthar Mosque, would issue the call to prayer from the door of the mosque without a loudspeaker. Amid a power outage that overtook the North Sinai Governorate, Qatamish, who is in his 70s, used all of his strength at the five prayer times each day, straining to be heard in the darkness of the city. As the days progressed, he saw his voice gradually falter. He became pale, out of breath.

Many of Qatamish’s colleagues in mosques in Sheikh Zuwayed and what is left of Rafah have faced the same ordeal, after explosions downed three high-voltage transmission towers in the west of Arish on September 15, leaving a single, fragile power station in the North Sinai capital as the only supply of electricity. When it shut down due to a technical problem and was unable to restart, life ground to a halt for the approximately 350,000 people that live in North Sinai’s three main cities.

However, the governorate’s electricity infrastructure was not the only casualty of the proximity to the ongoing armed conflict between the Armed Forces and militants. On the same day as the electricity grid went down, an explosion struck water lines leading to Arish’s main reservoir in Qantara. The city’s residents faced multiple water outages and saw ground wells they’d previously dug for drinking water become inoperational due to the power cut.

The situation has improved slightly since last week. Power returned to some areas of Arish last Wednesday and the Arish water company began operations again on Thursday. Neighborhoods in Sheikh Zuwayed are being provided with electricity in three-hour intervals, while Rafah continues to be in the dark.

Two apologies from the governor and 5 days of darkness

When the power went out last Saturday, the Electricity and Renewable Energy Ministry issued a statement at 9:35 pm, stating that two power stations in Arish were not operational without specifying the reason for the outage. Several days later, newly appointed North Sinai Governor Mohamed Abdel Fadil Shousha apologized to the people of Arish for the power outages, vowing to hold those responsible accountable whatever their position.

But the governor’s apology was not well received, particularly by residents of Sheikh Zuwayed and Rafah who were not mentioned in the governor’s statement. In response to the anger, the governor’s office issued a second statement addressed to the whole governorate.

While the governor kept quiet on the cause of the power outage in both statements, a  source in the North Sinai electricity directorate that spoke to Mada Masr on condition of anonymity says that the power went out after an explosion downed three high-voltage towers in the Sebeika district west of Arish. As a result, power outages affected Bir al-Abd and the villages to its east, extending out to Arish, Sheikh Zuwayed and the area bordering Gaza Strip near the city of Rafah.

There is an electricity line that runs from Bir al-Abd to the eastern portions of North Sinai, which would normally supplement energy being produced at the Arish steam electric power plant. However, according to the electricity directorate employee, the line was cut on September 15, leaving the region with only one source of energy.

And that one source didn’t last long. The steam electric power station in Arish continued to work for 30 minutes after the explosion but eventually stopped due to a technical problem, according to the source. Without alternatives to restart the power station given the electricity cut and a lack of fuel powered generators, the plant remained offline.

The electricity line that supplements the supply of power to the east has gone down several times over the last month, according to the source. These downtimes, which left the Arish station as the only energy supply, are are the result of vibrations that course through the line when a tower is hit by gunfire or the reverberations from a nearby explosion.  Representatives at the power station have requested backup fuel generators to safeguard the fragile energy situation, but they have not received a response.

In an attempt to solve the crisis, the Canal Company for Electricity Distribution improvised. On Sunday, the company extended an electricity cable from Mazar village, west of Arish, to the nearest electricity transformer in the city of Bir al-Abd, attempting to route electricity to the Arish steam electric station and restart it.

After two trials, the station was made partially operational on September 17, with maintenance personnel bringing the two turbines online.

But with so much of the city’s power depending on one supply, by Wednesday four transformers gave out due to overuse, according to an anonymous source in the Canal Company for Electricity Distribution. To prevent over burdening the grid, the electricity company decided to route electricity to neighborhoods gradually.

The reliance on the fragile Arish power station will have to hold until the three downed transmission towers are fixed, a process which the electricity directorate source tells Mada Masr could take anywhere from one to 15 days.

Back to water wells and jerrycans

The availability of water in Arish was not much better than electricity. Around the same time that the transmission towers were downed on Saturday, an explosion caused damage to the main water line that connects Qantara to Arish’s main reservoir.

The Company for Drinking Water and Sanitation in North and South Sinai issued a statement describing the incident as “an act of sabotage” that destroyed a pipeline between the 700 km and 1,000 km mark on the line, which lies between Sebeika and Abu Hussein.

A source in the Company for Drinking Water and Sanitation in North and South Sinai tells Mada Masr that maintenance teams were able to repair the damage from the blast and refilled the Arish reservoir. According to the source, water returned to Arish neighborhoods on Thursday night.

Although the water company distributes water throughout Arish, it is not suitable for drinking, and the small quantities do not meet demand, which has led residents to rely on wells dug in their homes.

However, the electricity cuts stopped the wells, which run on electric motors, from working, further limiting access to water. 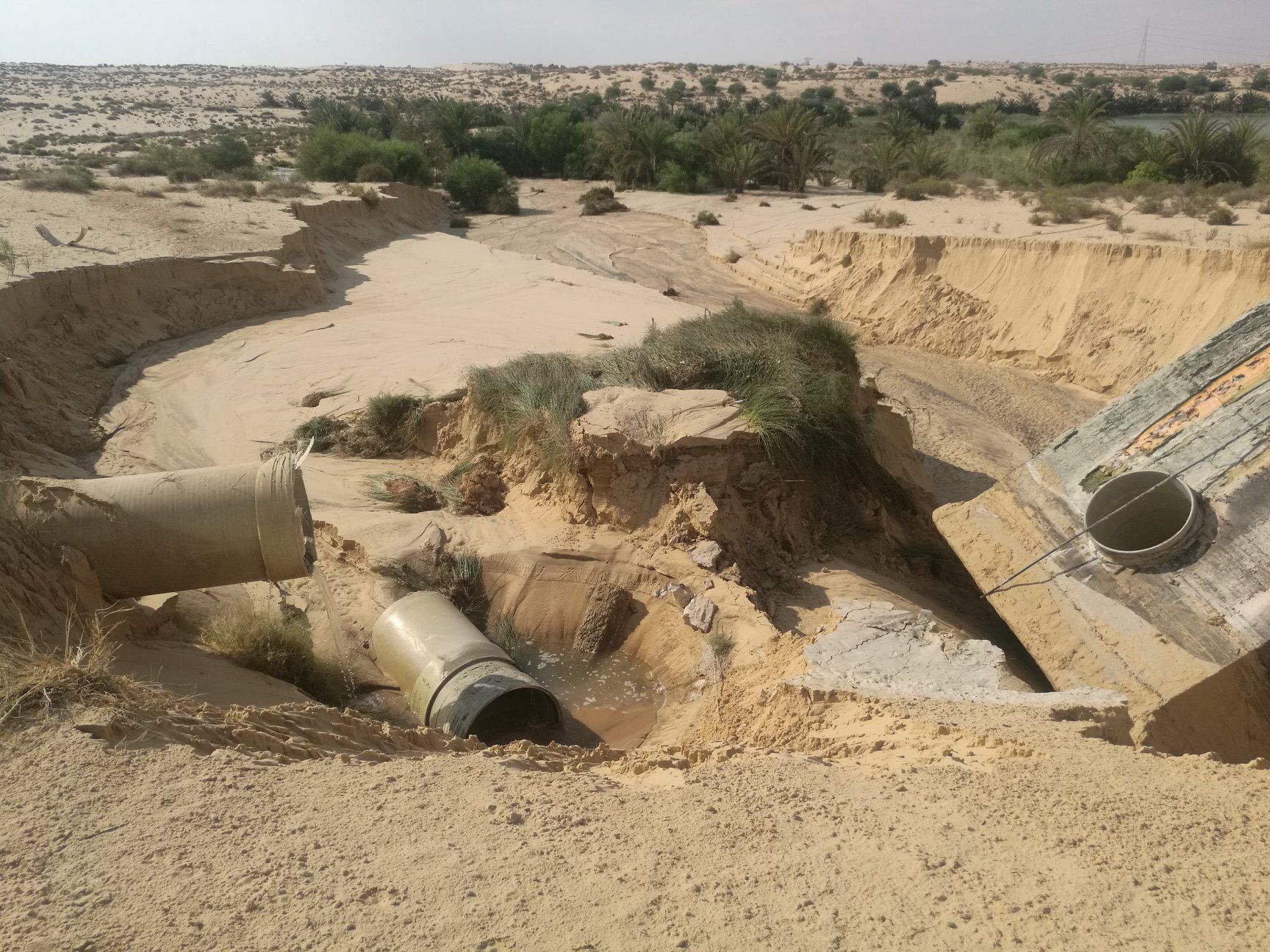 Damaged water pipeline - Courtesy: The Company for Drinking Water and Sanitation in North and South Sinai

Instead, residents began buying water jerrycans from the water distillation companies whose salespersons roamed the streets, according to one resident. But as the companies suspended their work due to the dwindling supply of water available for distillation, the crisis elevated, pushing the public water company to send water tankers to some areas and neighborhoods to ease the situation.

An Arish resident tells Mada Masr that she and her husband have cut back on the amount of water and food they consume, in an attempt to avoid having to use the bathroom due to the water outage. The family has been buying one carton of bottled water every day to drink and use in the bathroom.

In Sheikh Zuwayed, residents have also become dependent on well water, as in the last months running water has become very rare.

The darkness brought about by the electricity cuts caused days in the North Sinai capital to end early. As night approaches, all market activity and street movement is suspended until the sun rises the next morning.

A communications blackout also blanketed the city as a result of the power outages, with telecommunications and landlines out of service.

Private bakeries and those owned by the Supply and Internal Trade Ministry in Arish stopped working on September 16, the day after the reported explosions, leaving the bakeries the that produce traditional Bedouin bread, operating on gas instead of electricity, the only suppliers. These outlets faced lengthy queues, with residents only able to secure a few kilograms of bread at a time.

The crisis also hit fuel stations, which were supposed to start operating normally after a period of restricted fuel access.

Central Arish has stagnated since the commencement of Operation Sinai 2018, when the city’s only fuel station halted operations, leaving cars with no readily available supply. The military campaign, which launched in February, is purported to counter militancy in the peninsula.

The power outages inflicted particularly heavy losses on food traders and those who own supermarkets and frozen food outlets, many of whom attempted to contain the crisis by renting generators.

Residents too turned to fuel-run generators, but this proved ineffective when the fuel stations were unable to restart operations.

Kerosene lamps, an item which were previously only available at antique stores and brocantes, became available at Arish’s main market, with a small lamp going for between LE25 and LE50. Traders advised customers to add salt to the kerosene, to help the lamps burn for longer.

In recent years, Sheikh Zuwayed and Rafah have faced repeated power outages, with one last year lasting for a full month. At the time, a tower close to those targeted last Saturday was reported as damaged in an attack.

These recurring cuts in electricity and communications, and deteriorating living conditions, have compelled many residents to abandon the cities of Sheikh Zuwayed and Rafah.