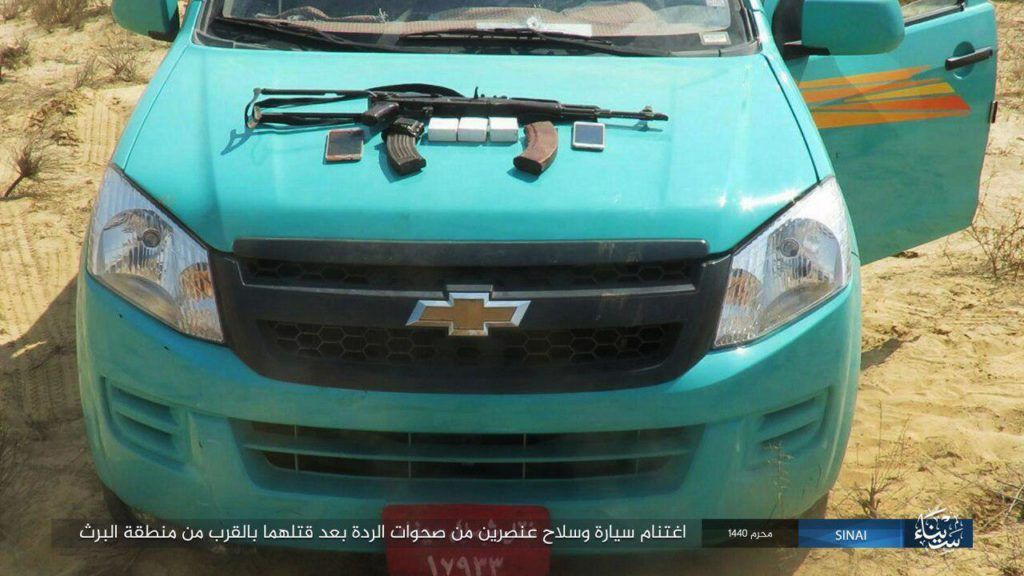 The Amaq News Agency, the Islamic State’s media arm, stated on Monday that the Province of Sinai killed three civilians, whom the militant group says were cooperating with Egyptian security forces in North Sinai.

Referring to those killed as “collaborators” — the term used by the Islamic State-affiliated group to describe civilians who cooperate with police and Armed Forces personnel in North Sinai — Amaq published four images that document the alleged killings, which it claimed were the result of the Province of Sinai’s activity in the area of Barth in the North Sinai city of Rafah.

One of the photos shows two members of the militant group aiming automatic weapons at two dead bodies in civilian clothing. Another photo shows an automatic weapon and two cellphones, which the news agency claimed belonged to the civilians that were killed, placed on top of a pick-up truck.

Two more photos depict another civilian, whom the agency also described as a “collaborator,” being decapitated.

The city of Arish, North Sinai’s capital city, has seen a recent uptick in militant activity, which has prompted heightened security measures in the governorate.

On August 25, an anonymous security source told Mada Masr that four police personnel were killed and 10 were injured in an attack on the Kilo 17 checkpoint in western Arish. Four armed militants were also killed in the attack.

A few days later, anonymous sources reported that one soldier and two civilians were also wounded in an exchange of gunfire between armed militants and Egyptian Armed Forces personnel responsible for securing a gas station in central Arish in August.

A paramedic and a driver were also critically injured when their vehicle was targeted by an IED as it was passing through the Mahager area, south of Arish in a similar attack.

The Province of Sinai claimed responsibility for all three attacks, according to the Amaq News Agency.

Topics
Related
attacks on military
Security restrictions eased in North Sinai, media reports killing of 11 alleged militants
The North Sinai governor announced an easing of some restrictions in a Monday meeting
Arish
Week of violence in Arish prompts heightened security measures
A week of violence has prompted reconfigurations in the security situation in North Sinai's Arish
attacks on civilians
Ambulance staff injured by IED blast in Arish
A paramedic and a driver were critically injured on Tuesday when their vehicle was targeted by an IED
North Sinai
1 soldier, 2 civilians injured in attack on security forces in central Arish
One soldier and two civilians were injured in an attack on Egyptian security forces in central Arish