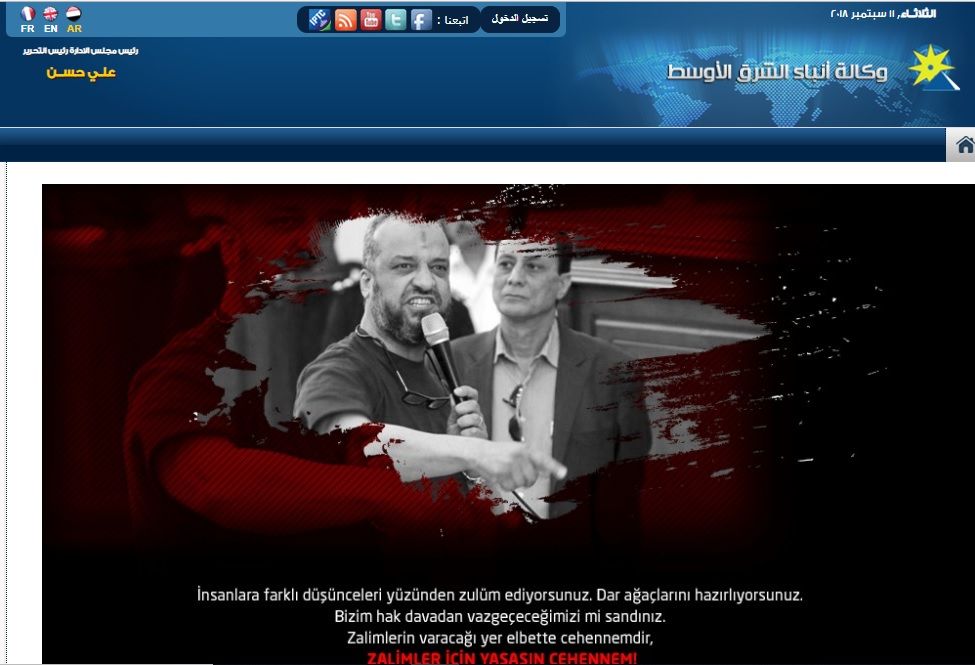 An image of Muslim Brotherhood leader Mohamed al-Beltagy, who was among 75 defendants sentenced to death in the Rabea sit-in dispersal case verdict on Saturday, was published on the site’s homepage, alongside a message in Arabic and Turkish that read, “We are the Ottomans, we are the invaders, we are Turkey.”

The post was signed Akincilar (Invaders), the name of a Turkish hacking group.

“Just because they have a different ideology, you strangle them and are unjust to the innocents,” the text published on the website read. “Many innocents are detained in your prisons of injustice. Did you think we would give up on our case? Hell is the place for the unjust. Long live hell for the unjust.”

MENA CEO Ali Hassan told the privately owned Al-Masry Al-Youm newspaper that the online attack was carried out by Muslim Brotherhood-affiliated hackers, and that the agency planned to pursue legal action against those responsible.

While it was inaccessible on Egyptian internet service providers for two hours after the image and text were published, users with VPNs and those abroad were still able to access the website.

The online attack came days after the Cairo Criminal Court issued its verdict in the protracted Rabea sit-in dispersal trial, handing death sentences to 75 Muslim Brotherhood members, life sentences to 47 others, while 374 others were issued 15-year prison sentences, 23 defendants, who were all minors, were sentenced to 10 years in prison and 215 others were sentenced to five years in prison.

Akincilar reportedly hacked the website of Cairo International Airport on August 14, 2015, on the second anniversary of the dispersal, in which 607 protesters and eight police personnel were killed, according to a fact-finding committee founded by interim President Adly Mansour, although other organizations have presented significantly higher figures.

The same group hacked the English portal of The Times of Israel website in November 2017, on the 100th anniversary of the signing of the Balfour Declaration.

Akincilar also targeted a number of Dutch websites in March 2017, as a reaction to a diplomatic spat that broke out between the Turkish government and several European countries that decided to prevent Turkish communities from gathering in public in support of President Recep Tayyip Erdoğan, ahead of a vote to amend the Turkish Constitution to expand the president’s powers.

In November 2011, the group also claimed responsibility for hacking the website of French satirical newspaper Charlie Hebdo hours after a firebomb attack targeted the publication’s office, in response to a cartoon that some considered to be insulting to Islam.

Topics
Related
death sentences
At long last, a verdict for Rabea
Mohamed Ashraf Abu Emaira | As the historic trial draws to a close, we map the details of the case, which spanned almost 5 years
freedom of the press
Independent Lebanese website Raseef22 joins hundreds of blocked websites in Egypt
Independent Lebanese website Raseef22 has joined the long list of blocked websites in Egypt
cybercrime law
How you will be affected by the new cybercrime law: A guide
How the law affects users, providers, web administrators, government employees and digital experts
internet surveillance
Civil society organizations, activists targeted by 2-month-long hacking campaign
An EIPR report has revealed that civil society organizations and activists have been the target of a