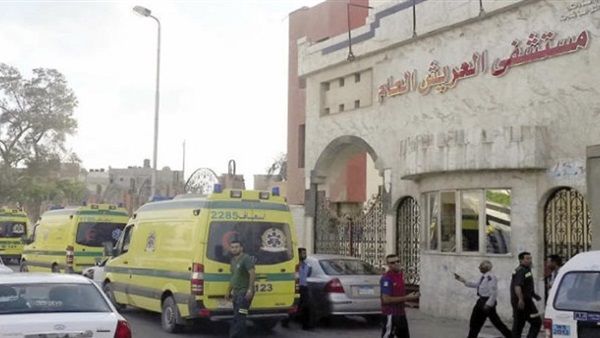 An enlisted police officer was shot and killed in Arish on Sunday by an unidentified militant, a security source tells Mada Masr, speaking on condition of anonymity.

The police officer was standing in front of a restaurant in Rifai Square in the North Sinai capital at around 1:30 pm on Sunday, buying food for himself and his colleagues, the source says.

A masked militant then shot the officer and fled in the direction of the street that runs through the city’s central market.

Following the attack, security forces, including both Armed Forces and police personnel, shut down parts of July 23 Street, the main thoroughfare in Arish. Security forces also forced commercial shops in the area between the crossroads of July 23 Street and Rifai Mosque to close their doors. The central market was also forced to close, as was the Sayeda market located on Rifai Street, the source adds.

The shooting follows a week of violence that has prompted reconfigurations in the security situation in Arish. Last week, the Province of Sinai, the Islamic State’s affiliate in Egypt, carried out an attack on military forces responsible for guarding a gas station in Arish and targeted a civilian ambulance in an IED blast south of the city. Security forces have responded by closing down several security checkpoints and reallocating forces to more intensive operations, which include establishing security perimeters around Arish neighborhoods and conducting home raids.

While Sunday’s attack has yet to be attributed to any militant group, the Amaq News Agency, the media arm of the Islamic State, has issued statements in which the Province of Sinai has claimed responsibility for both of last week’s attacks.

In an Amaq statement dated on August 28 but published on Thursday, the Province of Sinai claimed responsibility for the August 28 IED blast targeting an ambulance south of Arish.

In a separate Amaq statement published on Wednesday, but which was also dated August 28, the Province of Sinai claimed responsibility for the August 27 attack on military forces who were responsible for guarding a gas station near Nasr Square in Arish, asserting that three security personnel, including one officer, were injured in the incident.

However, according to security and medical sources that spoke to Mada Masr on Tuesday, the incident resulted in the injury of one military conscript and two civilians who were close to the scene of the incident. All of those injured were transferred to Arish General Hospital.

The attack on an ambulance the following day, in which two people were injured, occurred in an area where the Province of Sinai is known to be active.

A paramedic in the vehicle underwent surgery to amputate his feet due to injuries sustained in the attack, while the driver was injured by shrapnel from the blast, according to a medical source that spoke to Mada Masr. A source inside Arish’s ambulance station says that the ambulance was severely damaged as a result of the explosion.

In its Thursday statement, the Province of Sinai justified its targeting of the ambulance by claiming that the vehicle belonged to the Armed Forces. According to employees at the Arish ambulance station who spoke to Mada Masr, this is the first time an ambulance has been the target of an IED blast.

This is also the first time the Province of Sinai has claimed responsibility for an attack on an ambulance since it directly threatened to use such tactics against paramedics in Arish two years ago.

A statement issued in December 2015 by the Province of Sinai, which was addressed directly to officials at Arish’s ambulance station, warned paramedics against transporting injured members of the police and Armed Forces, describing them as “tyrants.” It also called on paramedics to stay away from police and Armed Forces bases, as well as other locations where security forces are stationed.

There have been incidents of militants opening fire on ambulances in recent years, which have resulted in a number of casualties among paramedics working for the main ambulance station in the North Sinai governorate. None of these attacks has been claimed by any militant group.

In March 2016, one paramedic was killed after being shot by militants, after the assailants attempted to stop the ambulance along the Arish-Rafah International Road. Militants opened fire on the driver and two injured soldiers inside of the vehicle and ordered the paramedics to drive away and not return to the area, according to one of the medical personnel who witnessed the incident.

In July, another paramedic was killed when an ambulance carrying the body of a conscript west of Arish was subject to heavy gunfire by unidentified militants, resulting in the injury of both the driver and the paramedic. The latter died days later from injuries sustained during the attack.

Employees at the Arish ambulance station explain that these previous incidents involved gunfire targeting ambulances from a distance and were primarily intended to intimidate. In past incidents, ambulances were also stopped by militants near areas where an attack had occurred and told leave the area, according to the employees. However, in last week’s attack, Province of Sinai deliberately targeted the vehicle with an IED, similar to its attacks on police and Armed Forces stationed at checkpoints.

Following last week’s violence, security campaigns have taken up establishing security perimeters around neighborhoods in Arish, a practice that had stopped nearly two months ago. It is also a sign that the Armed Forces campaign, Operation Sinai 2018, which began in early February, is still underway.

Amid the heightened security situation, police and Armed Forces personnel have withdrawn from a number of checkpoints that had been placed along main roads in the city center since June, for fear of being targeted and in order to allocate resources to more intensive security measures. The withdrawal from checkpoints came after the August 27 attack on military forces stationed at a gas station in Arish.

According to local sources, security forces have been withdrawn from six checkpoints since Thursday morning. The checkpoints were located in the Arish districts of Atawi, Seha, Um al-Qura and Samran, as well as Khazan and Qahira streets. These security checkpoints have been in operation since June, after a halt in security operations that involved establishing security perimeters around neighborhoods and conducting raids on houses.

Hours after the withdrawal from checkpoints, joint police and military units surrounded neighborhoods near the Rabea al-Arish Police Station, notably Salayma, Safa, Aroug, Sharbaga and Maqabir. An extensive sweep and search operation was then conducted in the same police district, mirroring a similar campaign that took place at the start of Operation Sinai 2018 some seven months ago.

Residents of the five neighborhoods targeted in the raids tell Mada Masr that security personnel searched homes on Thursday in an organized fashion, and that they had lists of those wanted by the authorities. The search operations are still underway, according to residents.

Tight security restrictions have also been implemented on all civilian travel along the Arish-East Qantara International Road following an attack on the Kilo 17 checkpoint on August 25 and last week’s violence.

The heightened restrictions include thorough inspections of cars and long hours spent at police checkpoints on the outskirts of the city, despite the fact that citizens are officially permitted to travel in and out of Arish without prior security clearance on Thursdays, Fridays and Saturdays.

Mada Masr spoke with two citizens who have traveled out of Arish in the past week. They say that they traveled on both days where security clearance is mandatory and days when it is not, adding that they waited between four and six hours in front of the Harbia checkpoint, located in front of Sinai University, and the Midan checkpoint before they could leave the city.

On Thursday, the North Sinai Governorate issued an official statement denying that it had ended the system allowing travel without security coordination on Thursday through Saturday, confirming that the rule is still in force.

Topics
Related
attacks on civilians
Ambulance staff injured by IED blast in Arish
A paramedic and a driver were critically injured on Tuesday when their vehicle was targeted by an IED
North Sinai
1 soldier, 2 civilians injured in attack on security forces in central Arish
One soldier and two civilians were injured in an attack on Egyptian security forces in central Arish
Arish
Security source: 4 police personnel killed, 10 injured in attack on police checkpoint west of Arish
Militants attacked a checkpoint on Saturday, killing four police personnel and injuring 10 others
Arish
5 signs that Operation Sinai 2018 is winding down
Do developments in North Sinai signal the end of the six-month military campaign?