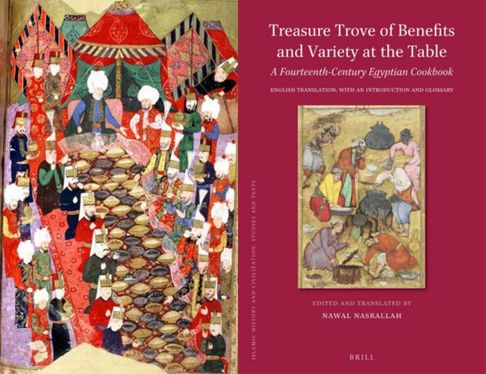 At Cambridge University library sits the most complete anonymous manuscript of Kanz al-Fawa’id Fi Tanwi’ al-Mawa’id, Arabic for Treasure Trove of Benefits and Variety at the Table, a 14th century Egyptian cookbook. In 1993, Manuela Marín and David Waines edited and published the manuscript, chronicling 750 recipes, which was the base on which Nawal Nasrallah, a native of Iraq and an award winning researcher and food writer, embarked on her endeavor to present a mediated translation of the work.

Published by Brill in 2017 and shortlisted for the Gourmand World Cookbook Awards 2018, the work is a formidable intertwined offering from a historian, translator, cook, cooking instructor and writer. While departing from Marín and Waines’ work, Nasrallah returned to one of the original manuscripts, of which only five copies exist in the world. She examined a copy in the Gotha Research Library at the University of Erfurt in Germany. The result is an English translation of the manuscript, or rather a treasure trove of 830 recipes for dishes, digestives, refreshing beverages and more. It also features a 56-page introduction, added illustrations, an extensive glossary, and a modern take on 22 dishes found in Kanz.

This is not Nasrallah’s debut in publishing on cookbooks and their history in the Arab-Muslim world. Her translation of Ibn Sayyar al-Warraq‘s 10th-century Baghdadi cookbook Kitab al-Tabikh, entitled Annals of the Caliphs’ Kitchens (2007), also by Brill, was an award winning publication. She also has two other original contributions on the subject: Delights from the Garden of Eden (2003) and Dates: A Global History (Reaktion, 2011).  She cooks and teaches cooking, and has many articles and recipes published in English that make her an authority on food history and cookbooks in the Arab-Muslim region.

In the first part of the introduction, Nasrallah unveils her skills as a historical detective as she focuses on deciphering the provenance, date and authorship of Kanz. In her inquiry, she finds that the use of mostly Egyptian measurements such as the qadah misri, Egyptian ingredients such as sugar, honey, molasses, rice and dates from the oases, unusual dishes such as sweetened chicken, and fresh varieties of local fish and pigeons for certain dishes — favored Egyptian fare — offer strong indications of provenance. She also looks into linguistic aspects such as ungrammatical language usage and colloquial expressions. Her conclusion, also verified by the other editors, is that Kanz was written sometime during the 14th century in Mamluk Egypt.

Nasrallah also argues, judging from the massive volume and the wide range of food categories, that the author of Kanz must have had recourse to many other food related books and manuals, both general and specialized, ones that covered issues spanning from food to agriculture to medicine and cosmetics. She identifies at least four references.

In the second part of her introduction, Nasrallah addresses medieval Egyptian food culture and the formation of Egyptian cuisine. She goes as far back as ancient Egypt. She writes about how Coptic Egyptians preserved their culinary practices during the Roman and Byzantine empires. At the time the Arabs arrived in AD 641, mostly from southern Arabia, Fustat became their first settlement. With the succession of Muslim dynasties and Caliphates, Cairo was built in the 10th century and became a flourishing metropolis by the 13th century, a cultural magnet and a haven for the surrounding regions. This urban rise, according to Nasrallah, brought variety to the culinary repertoire. She notes the introduction of many new plants and ingredients like sugar cane, rice, eggplant and citrus, which came about with the spread of Islam. All of these foods flourished in the fertile Nile floodplain, and by then a well-designed agricultural calendar was established based on the four seasons.

Nasrallah notes that trade was active, ensuring the import of ingredients which could not be cultivated, like nuts, while bringing high quality for regionally cultivated foods like olives, which were typically brought from the Levant. Exports were also active and included surplus salted fish, cheese, oils, safflower, lentils and refined sugar.

Nasrallah tackles class and social strata through food practices, with sources providing information about cooking, culinary traditions, extravagance, taste and royal generosity. From such sources, for example, we know that a peak in wealth, which was displayed through food, took place during the Fatimid period. Nasrallah also cites Ibn Shahin al-Zahiri’s (1468) 54 dishes cooked for the palace, where quality is a greater point of distinction between dishes than variety. Kanz includes most of these recipes and many more “humble” ones where attention to detail and good ingredients index wealth and status, even among ordinary people.

An interesting reference is made to palace kitchens, which served as culinary schools and where female slave cooks did their training, with some becoming famous, such as the Ayyubid cook Hafiziyya. Male cooks had their share of fame too. Palace cooks in general were rich and had access to the sultan. They could climb the social ladder and sometimes became viziers.

A short but adequate reference is also made to periods of low flood, famines and diseases from which the poor suffered most.

On shopping and eating out, Nasrallah gives a beautiful and detailed account of medieval Cairo markets referring to al-Maqrizi, Ibn Sudun and Nasir Khusru. She details their locations, organization, items, transportation systems and even waste and inspection manuals, a subject that merits a book in itself.

Food was also written about in poems, essays and riddles, but Nasrallah attributes the dearth of material written about food to the gap between Egyptian educated civilians and the ruling Mamluk Turks.

The third part of the introduction gives an extensive account of what we know about medieval Egyptian cooking as reflected in Kanz. Eleven pages cover what the book demonstrates about how cooking actually happened. It summarizes utensils, special equipment, unusual dishes, special features, etc. Nasrallah concludes that Kanz is a book written for those who had kitchens or a well-to-do household and who could afford having well-equipped kitchens and protection from fire.

While the recipes featured are not demanding in terms of cost, Nasrallah notes that some instructions are given to please certain palates, which is useful both to hired cooks or to self-employed cooks who serve customers, as opposed to home cooks. This would have been the benefit of books like Kanz which enriches and extends the experience of professional cooks.

Nasrallah also explores the section in Kanz which refers to the health benefits of certain dishes, as featured recipes include specific notes on curing ailments, aphrodisiac properties or aroma-therapeutic and cosmetic uses.

Throughout the introduction, Nasrallah refers to recipes by their number in the book and the Arabic name of the dish, which is both compelling and intriguing: it makes us search for the recipe while deciphering the Arabic name.

Here’s an example of how Nasrallah succeeds in giving a clear, simple and practical text in English to many of the 830 recipes which are difficult to understand and use, even for an Arabic speaker with culinary experience.

Here is an omelette recipe from the original manuscript: 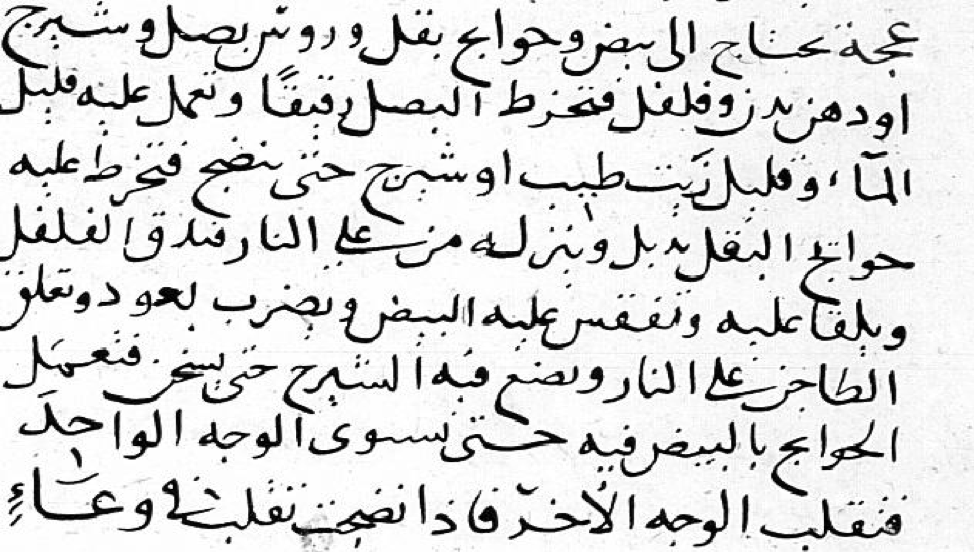 And this is its edited version:

And this is Nasrallah’s translation:

Nasrallah provides a breakdown of the contents of Kanz: 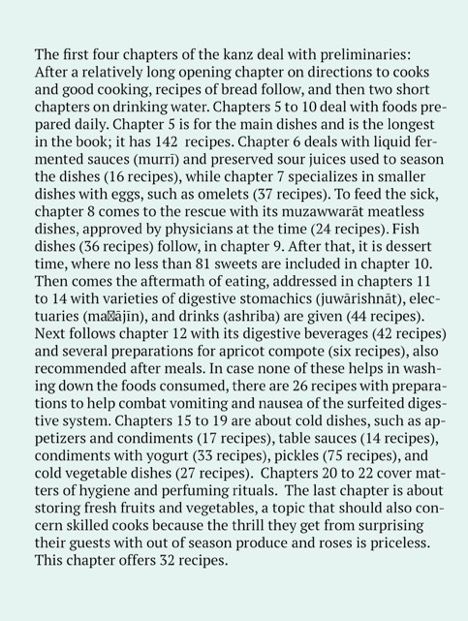 After the full translated text, Nasrallah adds a helpful alphabetical glossary with an explanation of terms, methods and general commentaries, translations and correlations with dishes known today.

Nasrallah ends her book with a fantastic contribution of 22 modern adaptations of some recipes from Kanz. All recipes were tried and photographed by the author. They are well written, easy to follow, and the outcome, as tested by this author, is delicious. Examples of these adaptations include a greener and more sophisticated predecessor of hummus with tahini. Nasrallah also includes a sweet chicken dish as a speciality of medieval Egyptian cuisine, one fish recipe with tahini sauce and another with sumac. Quails replace sparrows in the the Egyptian speciality asafir dish. At the book’s close are the desserts, including pudding rice, made to look yellow with saffron, and fried pastry made from scratch, providing a most welcome finale, unless you want to indulge still further with the famous nuhud al-adhari, or virgins’ breasts cookies.

Here’s a sample recipe from the 22 modern adaptations.  It’s a hummus recipe.

¼ teaspoon of each of caraway, coriander, black pepper, ginger, and cinnamon, all crushed

A quarter of a salted lemon, cut into small pieces

AD
You Might Have Missed
Carbon Colonies & A Green New Deal
What we talk about when we talk about trees
Mugamma revisited: Reimagining the building and the square
Where do old lesbians go to die?
AD
Hala N. Barakat
2 articles on Mada

Topics
Related
recipes
Mada’s Iftar recipes
Mada’s Iftar recipes from local chefs use seasonal vegetables and are good for the health after a day
recipes
Beats ‘n’ Eats: 7 recipes and 7 songs
Yomna Osman | Eish & Malh and Purplpitch kindly agreed to lend us recipes and songs to go with them
restaurant reviews
Some of Cairo’s restaurants in a handy map
Some of Cairo's restaurants on a useful map.
panorama
The orchard keepers
Bryony Dunne | Sinai, the land of extremes, is mostly in the headlines these days due to land disputes, drug trafficking