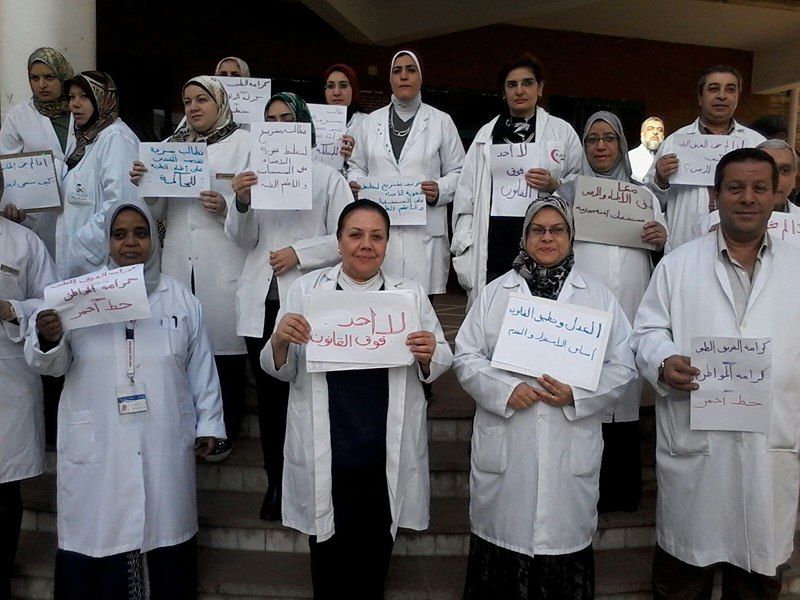 Egyptian doctors will not see an increase in compensation payouts for infections contracted in the workplace following a Supreme Administrative Court (SAC) decision on Thursday, according to Doctors Syndicate legal adviser Mohamed Shawky.

The Thursday decision saw the SAC throw out a previous administrative court ruling stipulating an increase in doctors’ compensation, after it accepted an appeal filed by the Egyptian State Lawsuits Authority, the body that represents the state in judicial proceedings.

Rashwan Shaaban, the assistant secretary general of the Doctors Syndicate, explained to Mada Masr that compensation for infections contracted in the workplace is currently set at between LE19-30 per month (equivalent to US$1.06-1.68), depending on the pay scale of the doctor in question.

Shawky told Mada Masr that the SAC’s decision is final, meaning that options for judicial recourse in this matter — which has represented one of the most significant areas of disagreement between the government and the Doctors Syndicate in recent years — have been exhausted. The ruling entails that compensation for infections will remain at LE19-30, a sum that will not increase unless the government issues a decision or Parliament passes legislation decreeing otherwise.

Following the death of 28-year-old doctor Dalia Mehrez, who contracted meningitis while on the job, the Doctors Syndicate filed a lawsuit before the Administrative Court in November 2015 obliging the government to increase compensation for doctors. In its lawsuit, the syndicate demanded that compensation be increased to LE1,000 and equal a minimum of 40 percent of doctors’ gross salary. Circuit 15 of the State Council accepted the case, according to Shawky, and the first ruling issued was in favor of the syndicate, requiring the state to raise the figure for compensation to LE1,000.

Shawky explained that the syndicate decided on the figure after conducting comparative studies to examine compensation policies for health workers in neighboring countries.

According to doctors interviewed by Mada Masr in May, however, the ruling was never implemented.

The Egyptian State Lawsuits Authority appealed the ruling in front of the Supreme Administrative Court in a bid to overturn it, arguing that there is no legislation requiring the government to increase compensation.

The report supported the government’s pushback, saying that the court has “placed itself in the position of the government, in violation of the principle of separation of powers.” It stated that the “stipulation outlined in Article 18 of Egypt’s Constitution, which provides for ‘improving the situation of doctors, nurses and health workers,’ is an obligation that the legislature must intervene to regulate.” Thus, the report argues, an appeal against this provision is in violation of the law.

While the report pointed out that “the judiciary is not in a position to change this situation in respect of the principle of separation of powers stipulated by the law and the Constitution,” it acknowledged “with unwavering certainty that the figure for compensation [currently] provided for deserving doctors is entirely unreasonable.”

According to Shaaban, the Doctors Syndicate will continue lobbying to secure a decent increase in compensation for doctors with the government and Parliament, given its failure to do so through the judiciary.

Over the last several years, the Doctors Syndicate has protested a number of issues that it sees as violations of doctors’ rights, including the matter of compensation, as well as the ratification of two pieces of legislation — the universal health insurance law and the clinical trials law — that the syndicate had staunchly opposed, and the recent firing and prison sentence handed down to a doctor for refusing to abandon his emergency room shift to respond to a prosecution summons. The syndicate called for an emergency general assembly in May but was unable to issue any binding decisions because it could not meet quorum.

Pointing to a litany of hurdles that have stymied health reform and a general “low ceiling” for trade union freedoms, Mona Mina, deputy head of the Doctors Syndicate, and Ihab Taher, the syndicate’s secretary general, resigned from their posts in late May.