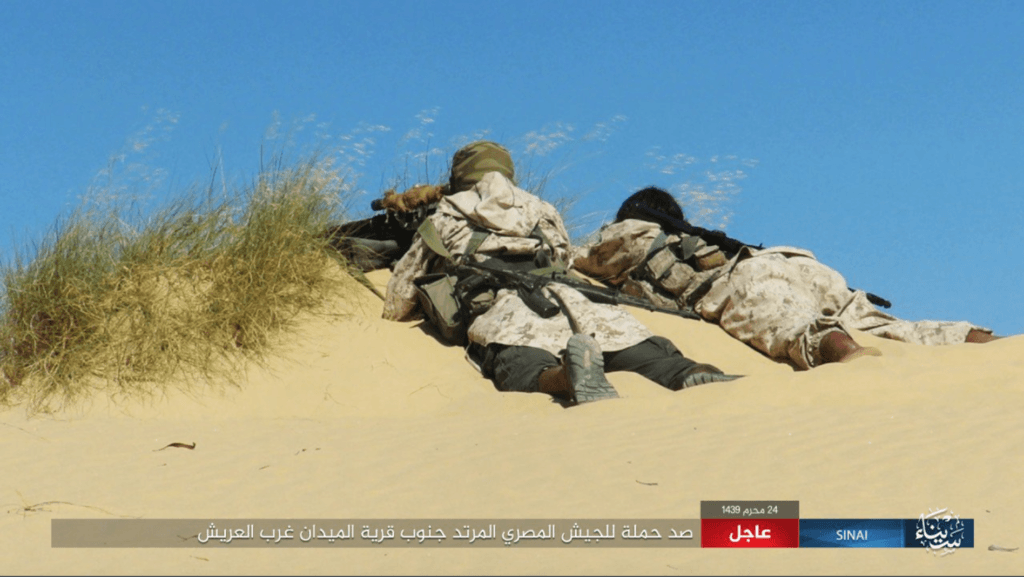 Police forces raided a building under construction in the Yasmine village west of Arish on Tuesday, according to privately owned Youm 7 newspaper, after receiving intelligence that the building was being used by armed militants as a hideout. Security forces allegedly killed 13 armed militants in the ensuing altercation and confiscated explosives, automatic weapons and ammunition, according to the report.

Also on Tuesday, Province of Sinai claimed responsibility for killing an Armed Forces officer in Gharra, an area southwest of Sheikh Zuwayed. The militant group also claimed to have shot and killed another soldier in the Ershadat area, west of Arish, and damaged a minesweeper near the border between Rafah and Gaza.

Tuesday’s violence was preceded by clashes that took place late last week between Province of Sinai and members of North Sinai’s Tarabin tribe, who are known to support the Egyptian Armed Forces in their operation against militants in North Sinai.

Local sources who spoke to Mada Masr on condition of anonymity reported that one Tarabin tribe member was killed and five others were injured on July 20 in an altercation that occurred between tribe members and the Province of Sinai in Agraa, an area south of Rafah.

In a statement released on July 20, the Sinai Tribes Union stated that four Province of Sinai members were killed and several others were captured by the tribe during the clashes.

Without specifying when the alleged attack took place, Province of Sinai released photos of weapons and ammunition via Telegram on Wednesday, describing them as “spoils” seized from an ambush orchestrated against tribes located in the Barth area of southern Rafah.

The group also announced through a Telegram channel on Sunday that Abu Gaafar al-Maqdisi, one of its members, was killed. No additional details were provided regarding the circumstances surrounding Maqdisi’s death. According to a source who spoke to state-owned news agency MENA, Maqdisi was the Province of Sinai’s leader in Sheikh Zuwayed.

Maqdisi is the second militant this month to have his death announced by the militant group, following that of Abdel Rahman al-Ansary, whose death was announced on July 13, also without further details provided.

On February 9, the Armed Forces launched Operation Sinai 2018, a large-scale military campaign that aims to “end terrorism” in the northern and central parts of the Sinai Peninsula. Following the commencement of the campaign, militant attacks in North Sinai had halted. Recent weeks, however, have seen an uptick in militant activity in the governorate.

The Interior Ministry’s latest announcement on counterinsurgency efforts in North Sinai came on July 11 and detailed a police raid on a residence in southern Arish in which 11 militants were killed.

During the past few days, the Province of Sinai has issued 10 statements on armed clashes and the destruction of military vehicles, which were published through the Amaq News Agency, the publishing arm of the Islamic State. According to these statements, most of the clashes took place in southern and western Arish and within the buffer zone along the Rafah-Gaza border.

The most recent statement by Armed Forces spokesperson Tamer al-Rifai on Operation Sinai 2018 was issued on July 3. In the military communiqué, Rifai stated that three alleged militants were killed, 59 suspects were arrested and 285 hideout and weapons warehouses were destroyed over an undisclosed timeframe. The spokesperson added that military uniforms, binoculars, a large amount of ammunition, 200 kg of TNT, a number of circuit boards for explosive devices, communication equipment and “takfiri” literature were also found in the warehouses raided.