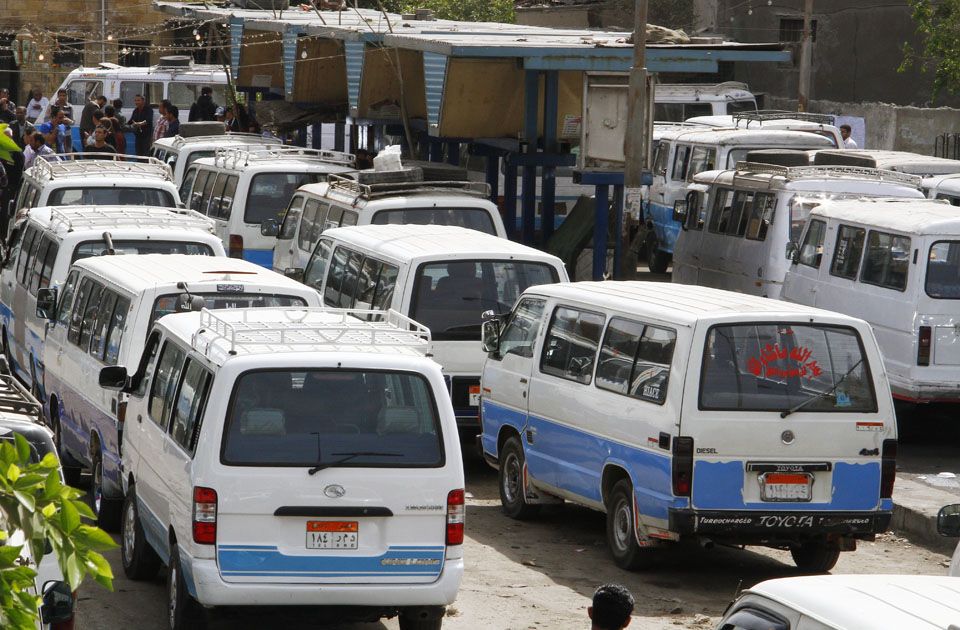 Egypt’s government is raising the tariffs on transportation as well as fares for regulated private taxis, hours after significant hikes for fuel prices were announced as part of a wider structural adjustment program agreed on with the International Monetary Fund (IMF).

Millions of Egyptians use semi-official microbuses every day as their main means of transportation. These microbuses are privately owned but follow the regulations of their governorates in terms of prices and transportation lines. Governors are also setting fares for private taxis to reflect new fuel costs.

Egypt raised prices of fuel on Saturday morning, with LPG cylinders (used in households and some commercial outlets as an alternative to gas) and 80-octane fuel and diesel (used to fuel trucks and microbuses) seeing the largest increases. This will have a pronounced impact on overall inflation levels, hitting lower-income households — which rely heavily on these fuels for day-to-day living — the hardest.

These are updates for the new transportation costs as they issued by each governorate:

In the vast, expensive capital, costs of transportation increased on Saturday by a minimum of LE0.5, meaning that for those who take the shortest rides, costs increased by a staggering 40 percent. However, the overall majority of increases in transportation costs were between 20 percent and around 30 percent.

In Upper Egypt’s Assiut, increases in prices of internal transportation within the city were less steep than in the capital and mostly fell between 8 and 25 percent.

The second largest city in the country in terms of population saw the cost of internal transportation rise between 12.5 and 30 percent. Alexandria, the main summer destination for lower middle-income earners, will now see vacationers’ budgets sharply affected by rises in transportation costs within the city.

On Saturday, Ahmed al-Shaarawy, the governor of Daqahlia, set the transportation tariff within the governorate at LE1.5, marking a 15 percent increase. He also raised taxi tariffs by 100 percent.

Transportation tariffs in Gharbiya, meanwhile, were raised by between 15 and 20 percent on Saturday. The increases announced by Governor Ahmed Deif Sakr (listed in the table below), however, note an increase of up to 35 percent for some public transportation routes.

Tariff increases in Minya ranged between 14 percent and 33 percent. On Saturday, Governor Essam al-Badawy raised the tariff for transportation within Minya city from LE1.25 to LE1.75, while the cost of transportation between Minya and New Minya increased from LE1.75 to LE2.25.

Port Said Governorate announced a 33.3 percent increase in microbus tariffs, and an increase of between 27.3 and 33.3 percent for taxis, with tariffs changing depending on whether the journey is within one area, or between certain neighborhoods.

Despite statements from the governor of Suez asserting that the increase would be limited to 20 percent, the new tariffs announced by the committee overseeing microbus pick up and drop off points in the governorate reveal an increase in the tariffs of internal transportation and taxis of between 13 percent and 36 percent.

AD
You Might Have Missed
Where do old lesbians go to die?
If they steal Sheikh Jarrah
Carbon Colonies & A Green New Deal
Mugamma revisited: Reimagining the building and the square
AD

Topics
Related
gas prices
Government hikes fuel prices by up to 66.7%
The government raised fuel prices at 9 am on Saturday morning by as much as 66.67 percent
electricity prices
Government raises electricity tariffs for industrial producers by up to 43%
Significant price increases for commercial outlets and industrial producers' electricity costs
social spending
As Egyptians brace for further increases in living costs, government announces social spending package
Waad Ahmed | Ahead of anticipated austerity measures, Parliament has approved a new social spending package
2018/19 budget
How to make LE89 bn in fuel subsidies disappear: Egyptians brace for steep price hikes
Waad Ahmed | What will it mean for Egypt to try to meet the 2019 deadline for liberalizing fuel prices?