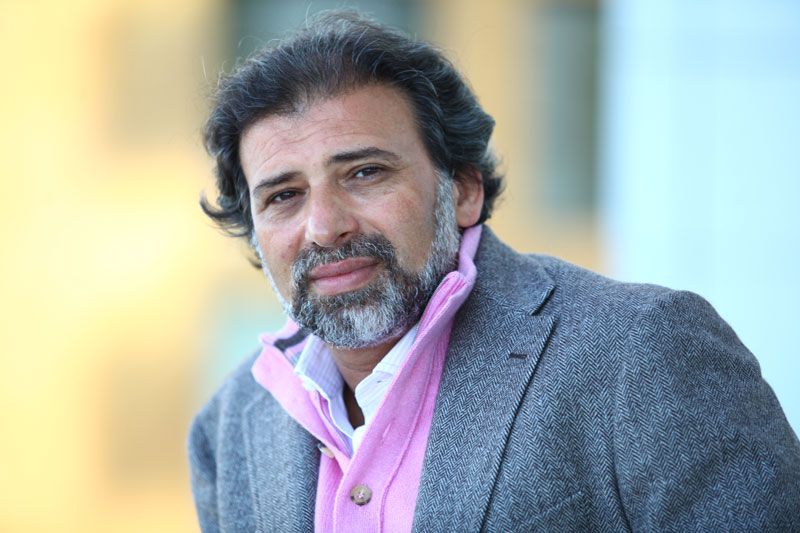 Egypt’s Censorship Board went back on a prior decision to ban director Khaled Youssef’s latest film, Karma, on Tuesday.

The Censorship Board had ruled on Monday to withdraw the film’s screening license, stating that it “violated the licensing terms granted,” without elaborating on the nature of these violations.

During a phone-in on the television program Hadrat al-Mowaten (Dear Citizen), which airs on Al-Hadath al-Yawm satellite channel, Youssef expressed his astonishment at the Censorship Board’s decision to withdraw the license late Monday night.

“Obviously some official — I don’t know who exactly — gave instructions to the Censorship Board to withdraw the license, because when they did they cited ‘violation of licensing terms,’” he said. “But when we asked them to tell us what terms we violated, they told us they have nothing, that we’re not in violation. And when we asked why they wrote that in their withdrawal decision, they said:‘instructions.’”

“I will address one of the sovereign entities, and God willing the issue will be resolved, because there is no reason for the film to be banned,” Youssef added. “The proof is that the Censorship Board approved the film after viewing it and did not cut a single scene. Usually, with controversial films, the censors feel things out and contact other entities to ask their opinion. That didn’t happen this time.” 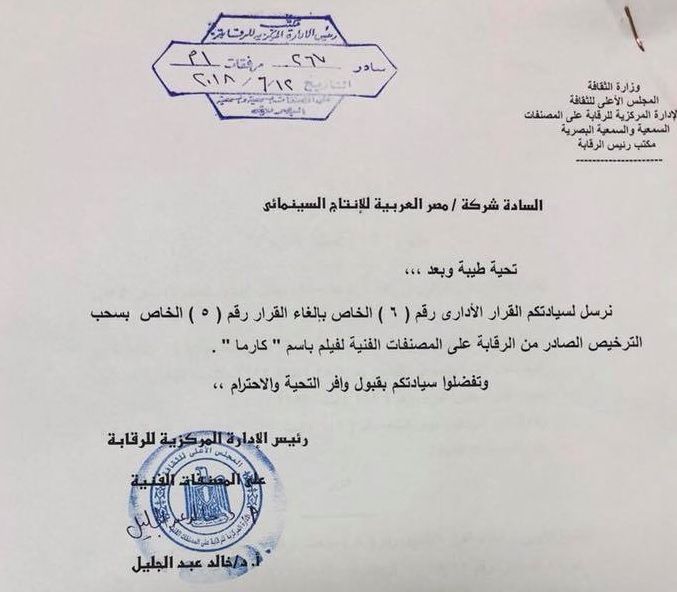 Early morning on Tuesday, Youssef released a video on his Facebook page announcing that he had once again received a screening license for the film, without any scenes or lines of dialogue being censored, and that the film would be released during Eid as originally planned.

Youssef expressed his gratitude to “all the state’s sovereign entities” that had intervened to resolve the crisis, along with Parliament, the Ministry of Culture, and Egyptian media outlets for “championing freedom of expression.” He also thanked film professionals who had supported the film, particularly the Film Committee of the Supreme Council of Culture, which had resigned in response to the film’s ban.

The committee had held an emergency meeting on Monday to deliberate on the Censorship Board’s decision, subsequently deciding to present a collective resignation to the Ministry of Culture “until the reasons behind the resignation were discussed, and a road map was put in place to support the freedom of filmmakers, and prevent the collapse of an industry of which we have always been frontrunners [in the region].”

Another part of the statement proclaims that “the film industry, as one of the pillars of Egyptian soft power, is under threat of imminent disaster on the professional and the industrial levels, without any  intervention from the state’s entities to protect and support both the industry as well as the rights of artists and intellectuals.” 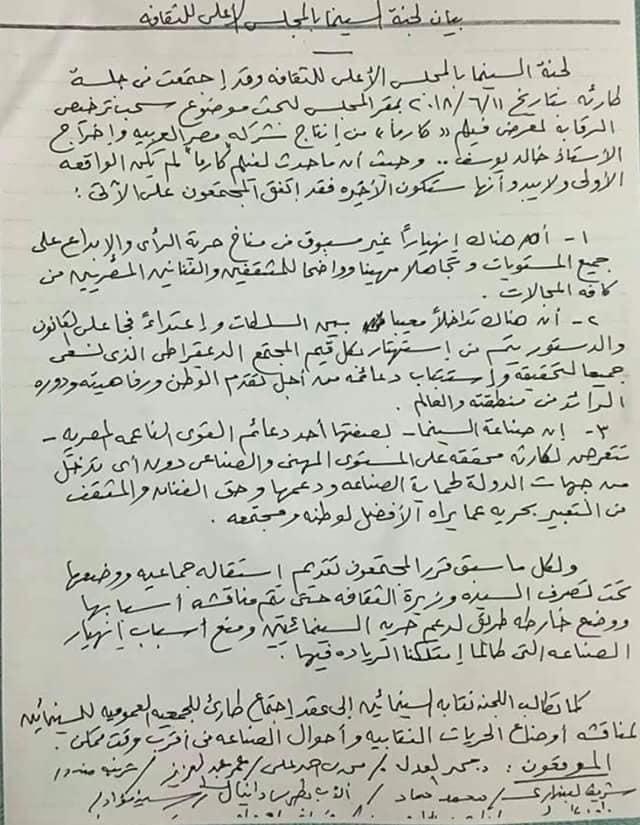 Several film professionals and and Egyptian intellectuals expressed their outrage at the incident, releasing a statement of condemnation on Monday that requested “presidential intervention” to resolve the issue. The statement claimed that the ban would allow “the enemies of the June 30 revolution to stage an attack on it,” asking how Youssef — described in the statement as “one of the symbols of the January 25 and June 30 revolutions” — could come “under fire” when both events are “referenced in the Egyptian Constitution.”

“It would not be the first time that the president’s authority be invoked to screen a film,” the statement added. “Political leadership has previously intervened in support of Egypt’s soft power by granting previously denied permission to screen the films Miramar and A Taste of Fear in 1969. Never has an entire film been completely banned from screening in Egypt, with the exception of Lasheen in the 1930s.”

The statement concluded by calling on President Abdel Fattah al-Sisi to intervene and “to steer the direction back on track and the planet back to its orbit.”

Topics
Related
music
A battle for existence: How the combined forces of censorship and security shaped Egypt’s music scene in 2017
Hessen Hossam | The restrictions imposed by the state on musicians in 2017 have been wider than ever in scope
television censorship
Vodafone Egypt suspends all ads in response to government censorship of TV commercial
Vodafone announced it is halting all “advertising campaigns in all media and broadcasting channels”
censorship
Why was the presumed censorship of The Nile Hilton Incident met with silence from Egypt’s filmmakers?
Bassam Mortada | Why haven't Egyptian filmmakers responded to the cancellation of The Nile Hilton Incident screenings?
censorship
Zawya cancels The Nile Hilton Incident screening, cites ‘involuntary circumstances’
Citing “involuntary circumstances,” Zawya Cinema announced yesterday that Swedish-Egyptian director