اقرأها بالعربية
At the terminal: Stories from the Rafah Border Crossing

It has been one month since the Rafah Border Crossing was opened, marking the longest window in which Gazans have been permitted to leave and reenter the besieged Gaza Strip since 2013.

What was initially purported to be a four-day opening was extended on May 17, when President Abdel Fattah al-Sisi announced that travel across the Egypt-Gaza border would be permitted throughout the month of Ramadan.

From Gaza to the outside world

Mada Masr spoke to several travelers waiting on the Palestinian side of the crossing.

Zuheir al-Qashash, 44, was there with his family, which includes four children. “I sold my apartment,” he says. “I registered my entire family for crossing, and we are going to live with my mother in Egypt. To live in Gaza is to die slowly. I will not have my children continue to suffer through what we have been experiencing for the past 10 years.”

Qashash tells Mada Masr that he paid nearly US$7,000 for registration and “coordination in order to cross through Rafah.”

“It’s a big gamble,” he says. “But the biggest gamble of all is to patiently wait in Gaza, in hopes that the conditions will improve.”

To travel across the Rafah crossing, Palestinians must board special busses and pay large sums of money to register through travel agencies in Gaza. These agencies then submit applications to officers on the Egyptian side, according to several people who attempted the trip. Once officials in Palestine receive a select list of names approved by the Egyptians, they notify those selected to prepare to cross. The list, however, is always handwritten and never bears the official mark of Egypt’s Interior Ministry or any other government agency.

Palestinians have left the Gaza Strip in increasing numbers since the 2014 war with Israel. It is not unusual for entire families to leave at the same time, according to copies of the lists of travelers obtained by Mada Masr. Some of these families have since relocated to Europe.

The sight of entire families waiting at the Palestinian terminal for their passage to be approved has become increasingly common, following Sisi’s Ramadan announcement. 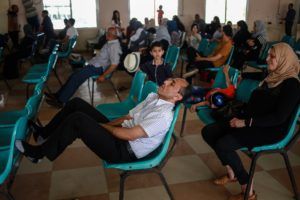 Maryam Abu Serr’s family is one of them. “I’m taking a trip with my children and grandchildren. Then I will come back alone to be with [my husband,]” who stayed behind, she tells Mada Masr.

Abu Serr is slowing down in her old age, and she wishes she could have her grandchildren around to help her. But she opted to have them escape the decade-long blockade. “This is the first time the Rafah crossing has been opened [in this way]. We have to take advantage of this opportunity and remove the children from the hell that is Gaza,” she says. 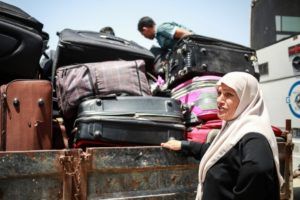 Ramzy Abul Qumsan, a public relations officer at the Palestinian General Agency for Crossings and Borders (GACB), tells Mada Masr that approximately 4,000 people left Gaza between May 12 and the close of last week, at an average rate of 250 people each day.

In that same period, 534 people reentered Gaza, and the Egyptian authorities having denied 522 people entry into Egypt.

The GACB, an affiliate of the Palestinian Authority’s Interior Ministry, has yet to disclose any official figures on the number of people who have crossed the border since May 12. The agency is expected to release final statistics once the crossing is closed again.

The Rafah Border Crossing has been periodically opened in the past, but typically only for three days at a time. According to Abul Qumsan, up to 1,000 people would be granted passage into Egypt each day during these openings, compared to the 250 daily average permitted entry by Egypt over the last month.

Several Palestinians who spoke to Mada Masr see a need for the Egyptian authorities to permit more people through.

Momen Sokkar, a 34-year-old plumber and security guard for a residential building, tells Mada Masr, “This is the first time I have attempted a trip. I’m a father of four. My uncle in Turkey got me a job and I hope to be able to get there this month.”

An opening during the Great March of Return

This partial easing of the siege comes amid ongoing Israeli violence during the Great March of Return protests. On May 13, one day before Israeli forces killed at least 62 people, a Palestinian delegation — headed by Ismail Haniyeh, the head of Hamas’ political bureau — left Cairo after a round of diplomatic talks with Egypt’s General Intelligence Service (GIS) to discuss a European Union proposal that would have lifted the siege in exchange for an end to the Great March of Return protests.

“Hamas agreed to the proposal,” one of the sources said. “But it [was] not happy about the unstable security conditions at the Rafah Border Crossing, which prevent the crossing from remaining open at all times. Therefore, Hamas demanded that a sea and air corridor be opened and [managed by] joint international committees as a condition for acceptance of the agreement.”

The condition was rejected by the Egyptians, however.

The timing and the unusually short duration of the two-hour meeting prompted speculation. When the violence broke out the following day, Egypt offered facilitations regarding the Rafah crossing and allowed the passage of urgent humanitarian and medical aid supplies. 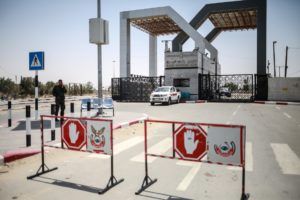 Palestinian observers perceived the measures taken by the Egyptians, and the ensuing media campaign, as an attempt to portray Hamas as using the mass mobilization to leverage either limited progress in the talks or acceptance of the continuation of its rule over the Gaza Strip. These efforts were aided by Hamas’ political performance, which fell short of the public’s expectations — at least with respect to its management of the political battle that paralleled the popular movement, according to Palestinian observers.

Safaa Khalil, 30, has been residing in Stockholm since 2007. The news of the land crossing being open throughout the month of Ramadan motivated her to pack her bags and plan the journey back to her hometown with her children. However, she hesitated and has not been able to make a final decision about whether to embark on the trip. “The crossing is volatile,” she tells Mada Masr over the phone. “I fear, if we come home, that we would get trapped inside and not be able to go back to our work and lives.”

Back at the Palestinian terminal, Khalil’s mother, Fayza Ashour, tells Mada Masr: “I long to smell my daughter. I long to hug her children.”

Khalil has had two children away from her family: Rifal is five years old, and Daniel is barely one.

She had left through the Rafah crossing 11 years ago without a goodbye party or even a wedding. Visiting Gaza has constantly been on her mind since then, but the crossing’s history of frequent closures and the security conditions in Sinai have always discouraged her.

“I yearn to hug my mother. I wish to spend Ramadan and Eid with her. But the Rafah crossing is fickle,” she says.

Ebtessam al-Shaer, 54, works at a small grocery store. Starting in 2002, her four children left Gaza, one after the other, to work abroad. The last to leave, Mohannad, traveled to Istanbul to work at a restaurant there.

She tells Mada Masr that she has never met her grandchildren. “I long for the return of all my children, with their children and their wives. I wish to hug them all, and for us to live a happy life together. But nobody can tell when the crossing will be opened and when it will be closed.”

Hamas handed over control other the Rafah Border Crossing — alongside the Beit Hanoun and Karm Abu Salem crossings between the Gaza Strip and occupied Palestine — to the Palestinian Authority in November as part a reconciliation agreement reached between the groups and mediated by Egypt’s GIS.

AD
You Might Have Missed
Where do old lesbians go to die?
Carbon Colonies & A Green New Deal
What we talk about when we talk about trees
Mugamma revisited: Reimagining the building and the square
AD
Hamza Abu Eltarabesh
11 articles on Mada

Topics
Related
attack on Gaza
Modes of engagement: Pause in Israeli escalation raises questions about next steps in Gaza
Hamza Abu Eltarabesh | 'The proceedings on the ground are an exchange of messages, but these messages are cryptic.'
Rafah displacement
Egyptian authorities separate buffer zone from Rafah City with barbed wire
Residents hope the barbed wire will mean the remaining villages in Rafah won't be destroyed
Gaza
Report from Gaza: Wounds of return
Hamza Abu Eltarabesh | 'This is the price you pay for being a Palestinian and not ceding your land'
attack on Gaza
Prelude to Israeli violence in Great March of Return: Hamas-Egypt meeting fails to bring truce
Hamza Abu Eltarabesh | Source: Hamas accepted EU proposal via Egypt to lift siege on Gaza but Egypt refused