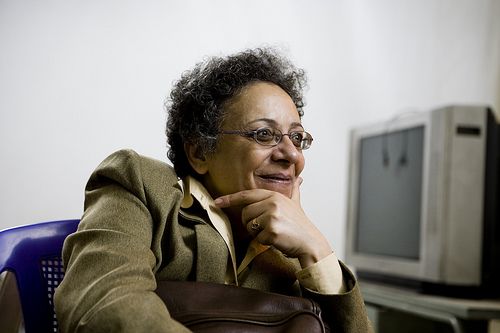 The interrogation of Magda Adly, one of the founders of Al-Nadeem Center for Rehabilitation of Victims of Violence, as part of the ongoing NGO foreign funding case, was postponed by an investigating judge on Sunday.

A new date for Adly’s interrogation in Case 173, opened in 2011, is set to be announced next week.

Adly told Mada Masr the judge informed her that she faces charges of establishing an entity in violation of the civil society law and professional and medical practice, as well as publishing information that is harmful to the state.

On May 28, the investigating judge summoned Adly and Suzanne Fayyad, also a founder of Al-Nadeem, for interrogation. This was initially scheduled to take place on Thursday. The hearing was adjourned until Sunday, when investigators only questioned Adly.

“We cannot afford to ignore the fact that this call comes just a month after Al-Nadeem received the ninth Amnesty International Prize, as if the institution deserved punishment for this international recognition,” Al-Nadeem said in a statement published on Sunday.

The center received Amnesty International’s 2018 Germany Human Rights Award in January for what the human rights organization described as “a strong stand against torture.”

The award announcement came less than a year after the forcible closure of Al-Nadeem’s headquarters by security forces on February 9, 2017.

After a number of attempts to close the center, the Health Ministry issued a contested closure order against the NGO in February 2016. The ministry claimed the center had violated the law by shifting its focus from providing medical services to advocating and working on human rights issues. Al-Nadeem responded by saying that the organization does not fall under the supervision of the Health Ministry.


Authorities at Cairo International Airport banned Al-Nadeem co-founder Aida Seif al-Dawla from international travel in November 2016 without prior notice, a move that is largely believed to be connected to a judicial investigation into accusations against a number of human rights organizations of receiving illegal foreign funding. A number of other human rights defenders — including Gamal Eid, Hossam Bahgat, Mohamed Zarea, Mozn Hassan and Azza Soliman  — have been interrogated in relation to this case, had their assets frozen and been banned from leaving Egypt, pending investigations into charges of receiving foreign funding with the aim of destabilizing national security.

The case dates back to December 2011, when Egyptian authorities stormed the headquarters of a number of foreign civil society organizations and formed an investigative committee to look into their activities. The investigation was split into two parts: a case dealing with foreign organizations operating in Egypt, which is currently in retrial, and a second case addressing local organizations, which is still under review.

Al-Nadeem was established in 1993 and provides legal and psychological support for victims of torture and violence, especially those in prison and detention facilities, in addition to wider activities that include research and training.