Israeli combat aircraft bombed a medium-sized boat inside a workshop at the Gaza Seaport on April 27.

The boat was later repaired to lead the first voyage from Palestine to Cyprus, in attempt to break the Israeli blockade on the Gaza Strip that has been in force for over a decade, according to the Supreme National Commission (SNC) for the Great March of Return. The voyage would be the first of its kind, as all previous attempts to break the 12-year blockade involved ships sailing from the outside world toward Gaza.

The boat, named the Freedom Ship, set sail on Tuesday, one day before the eighth anniversary of the 2010 assault on the MV Mavi Marmara, one of several ships in a humanitarian aid flotilla that attempted to break the blockade on Gaza. The raid was carried out by the Israeli naval forces on May 31, 2010, killing 10 Turkish activists onboard and injuring approximately 60 people.

Israel also bombed four other boats in two airstrikes on the Gaza Seaport in April of this year. The boats had been undergoing preparations to sail from Gaza to several international ports on the Mediterranean Sea.

The airstrikes, however, did not scare off activist Ihab Abu Ermana from joining Tuesday’s flotilla. “We are setting sail peacefully. The people aboard these boats are students who have not been able to get to their schools, wounded people, and ill people,” he tells Mada Masr.

“He only hopes to graduate and find work, so we can have a dignified life. I fully support him in this, and I hope he arrives safely,” Abu Ermana’s fiancée says, before she hugs him goodbye.

The Interior Ministry in Gaza received hundreds of applications from people, expressing their desire to take part in the voyage, according to Freedom Flotilla organizer Mahmoud al-Eila.

Abu Ermana, whose wedding date is approaching, sees the voyage ending in one of two possible ways: death or arrest.

Even though Turkey enjoys sovereignty over its territorial waters, Israel killed the 10 Turkish activists on board the MV Mavi Marmara in the span of 15 minutes in 2010, the airstrikes being conducted without regard to anyone on board. Arriving in Cyprus, therefore, seemed to be nearly impossible. 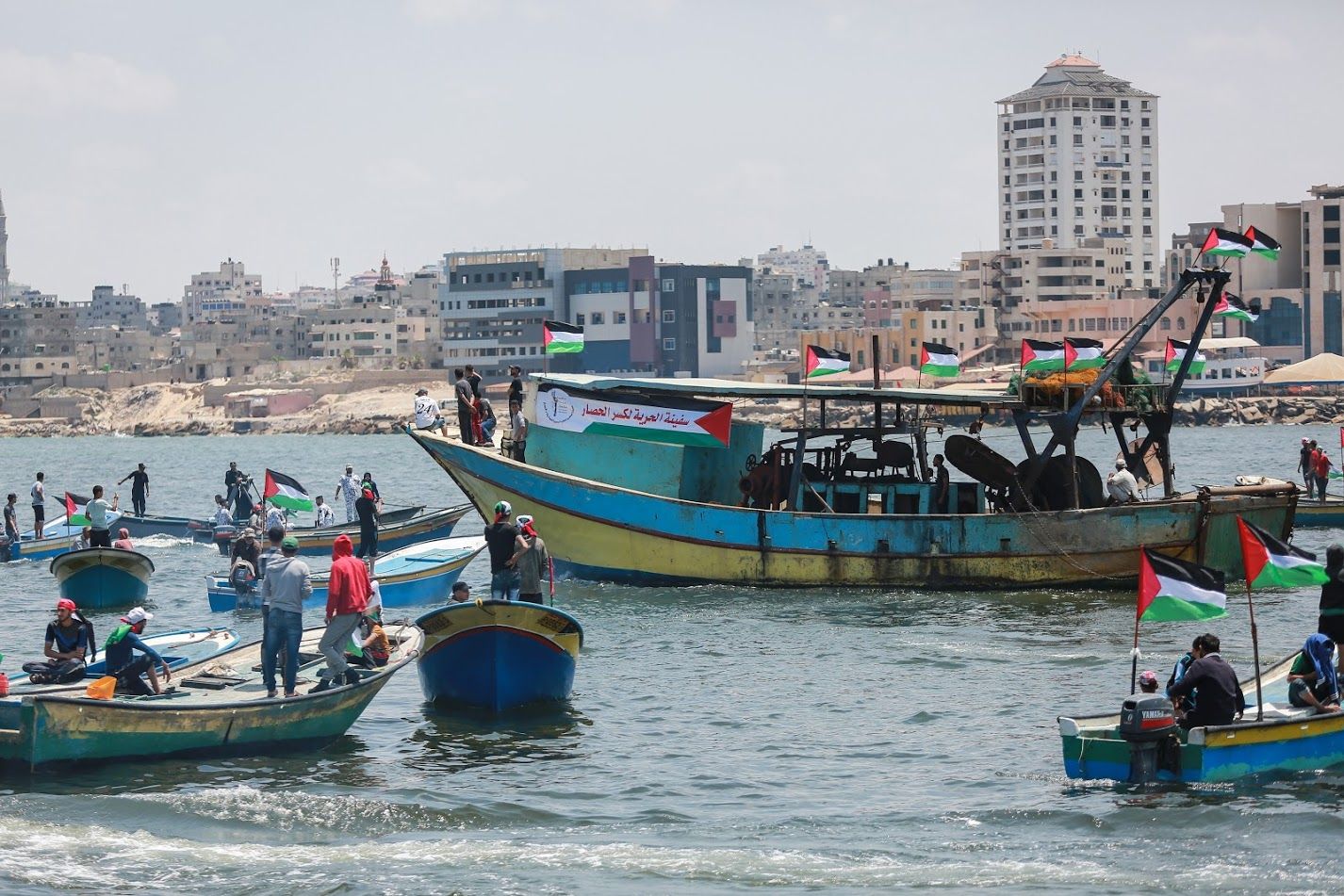 The Freedom Flotilla’s planned Tuesday departure was not canceled, despite the escalation between Israel and Palestinian factions that saw Israel forces carry out a litany of airstrikes and Hamas and Islamic Jihad in Palestine fire dozens of projectiles in response. On Tuesday morning, the SNC built a stage at the Gaza Seaport that would serve as a platform to see the voyage off. The ceremony was attended by several prominent Palestinian leaders in Gaza, representatives of rights and humanitarian organizations and foreign journalists.

“All we have in our possession is paperwork. Some of us have university diplomas, and others have medical reports. All we are seeking is a dignified life and for the siege to be lifted,” Abu Ermana tells Mada Masr just before his boat sets sail.

The Freedom Ship was carrying 17 passengers when it began its voyage: patients, students and people who were wounded in the Great March of Return protests, as well as fishermen. Ornamented with Palestinian flags, the boat was followed by a flock of approximately 50 small fishing boats, locally referred to as haskas.

“Samah was prevented [from traveling] several times,” her mother says. “Traveling is her only option to get medical treatment. This is why she chose to embark on this life-threatening trip.”

According to the organizers, maps show that the route to the Cypriot Port of Limassol is 412 km long, or approximately 222 nautical miles (a nautical mile is approximately 1.85 km.) If the ship had been able to cut across the sea un-intercepted by the occupation forces, the voyage should have taken 22 hours.

The Israeli military began construction of a maritime barrier north of the Gaza Strip two days before the voyage was set to take place, however. The purpose of the structure is to “prevent Hamas operatives from infiltrating by sea,” said an Israeli military spokesperson.

The Israeli Defense Ministry announced on May 27 that the barrier is being erected on Zikim Beach to prevent another “infiltration” by sea like the one carried out by Hamas during the 2014 war. The structure will comprise of three layers: an underwater barrier, a stone barrier and a barbed wire barrier.

The construction of the land barrier along the 65-km-long borderline with the Gaza Strip will also continue simultaneously, made up of a wall embedded deep in the ground and a six-meter-high, above-ground fence.

Sailing into the no-go zone

Abu Ermana and his companion, Shadi al-Naqla, began to livestream the voyage on Facebook as soon as they set sail, urging viewers to share. They sailed through the first few miles smoothly. But as they approached the ninth nautical mile, the live feed broke. A billow of smoke rose into the sky at the same time.

“We thought [Israeli] navy boats were bombing the ship when we saw the smoke,” one flotilla organizer says, speaking to Mada Masr on condition of anonymity. “But when we learned where the smoke was coming from, we were overjoyed.” The ninth nautical mile fence — which was installed by the Israeli military to mark the maritime range Gaza fishermen are allowed to sail within — had been burned by the smaller boats flanking the Freedom Ship.

With the fence no longer an impediment, the boat was able to enter the no-go zone and was likely to come under fire.

It was not long afterward that the live feed resumed. Abu Ermana reappeared, describing the situation and asserting that everyone was determined to continue on the journey, even though four Israeli naval boats were approaching.

As the boat eclipsed the 14th nautical mile, Naqla announced through the feed: “An Israeli boat is coming up behind us. We are fine, and we hope to remain unharmed.”

Under the Oslo Accords, signed in 1993 by Israel and the Palestinian Liberation Organization, the fishing range should be 20 nautical miles off the Gaza coastal line. However, under the parameters of the continued occupation, Israeli authorities reduced it to 12 nautical miles, then to six, then to three, before it was finally extended to nine.

At the 14th nautical mile

Late Tuesday afternoon, the SNC announced that Israeli naval boats had surrounded the Freedom Ship and seized it near the 14th nautical mile, information that corresponded with the loss of the livefeed.

Israeli newspaper Yedioth Ahronoth reported on Tuesday evening that the Israeli Navy overtook the boat and stopped it, and that “the vessel was towed to a navy base in Ashdod” in southern occupied Palestine.

According to the SNC, four Israeli military boats surrounded the Palestinian boat beyond the nine nautical mile range. The commission stated that it holds Israel fully responsible for ensuring the safety of everyone aboard the Freedom Ship.

Israeli authorities released 14 of the passengers on the same day, but the captain, the first mate and one passenger remain in detention, according to Al-Quds Al-Arabi newspaper.

One organizer tells Mada Masr that another voyage will be launched within two weeks.

AD
You Might Have Missed
Mugamma revisited: Reimagining the building and the square
Carbon Colonies & A Green New Deal
Where do old lesbians go to die?
What we talk about when we talk about trees
AD
Hamza Abu Eltarabesh
11 articles on Mada