Report from Gaza: Wounds of return
While Israel continues to open fire on peaceful protesters, Gaza hospitals are unable to provide adequate care due to severe overcrowding and a critical shortage of supplies

On Tuesday afternoon, Bahaa Baalousha, 24, rode his motorcycle to Malaka, east of Gaza City, to join his fellow Great March of Return activists. It was the second day of the most recent wave of mass peaceful protests against the relocation of the United States Embassy to occupied Jerusalem.

Just minutes before, Baalousha went to see the body of his friend Ahmed al-Rantisy, who had been killed by live Israeli ammunition one day earlier, alongside over 60 other Palestinians on the deadliest day of the Great March of Return protests.

The crowds were not as large as on the first day, but Israel’s violent attempts to quell the protests failed to bring them to a complete halt. The aggression exhibited by Israeli snipers on Monday did not deter young people from marching in the hundreds, Baalousha among them, toward the border fence, proudly waving the Palestinian flag and shouting at the soldiers hiding behind sand barriers on the other side, just 250 meters away. 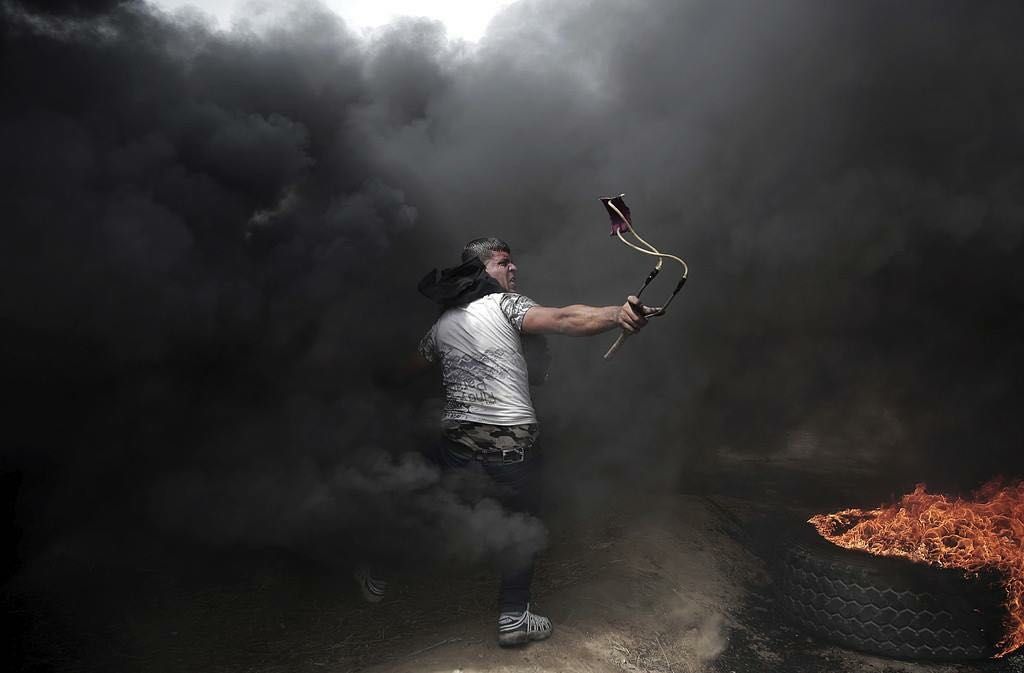 Malaka is the base camp for the Great March of Return protests, which launched on March 30, the 42nd anniversary of Land Day. Parallel camps were set up along the eastern side of the Gaza Strip by Mutabbaq gate in Rafah’s Nahda neighborhood; by Najjar Gate in Khzaa, Khan Yunis; by Madrasa Gate in Breij Camp, Deir al-Balah Governorate; by Abu Safiyeh Gate in Shamal and the 4/4 checkpoint located north of Beit Hanoun city. 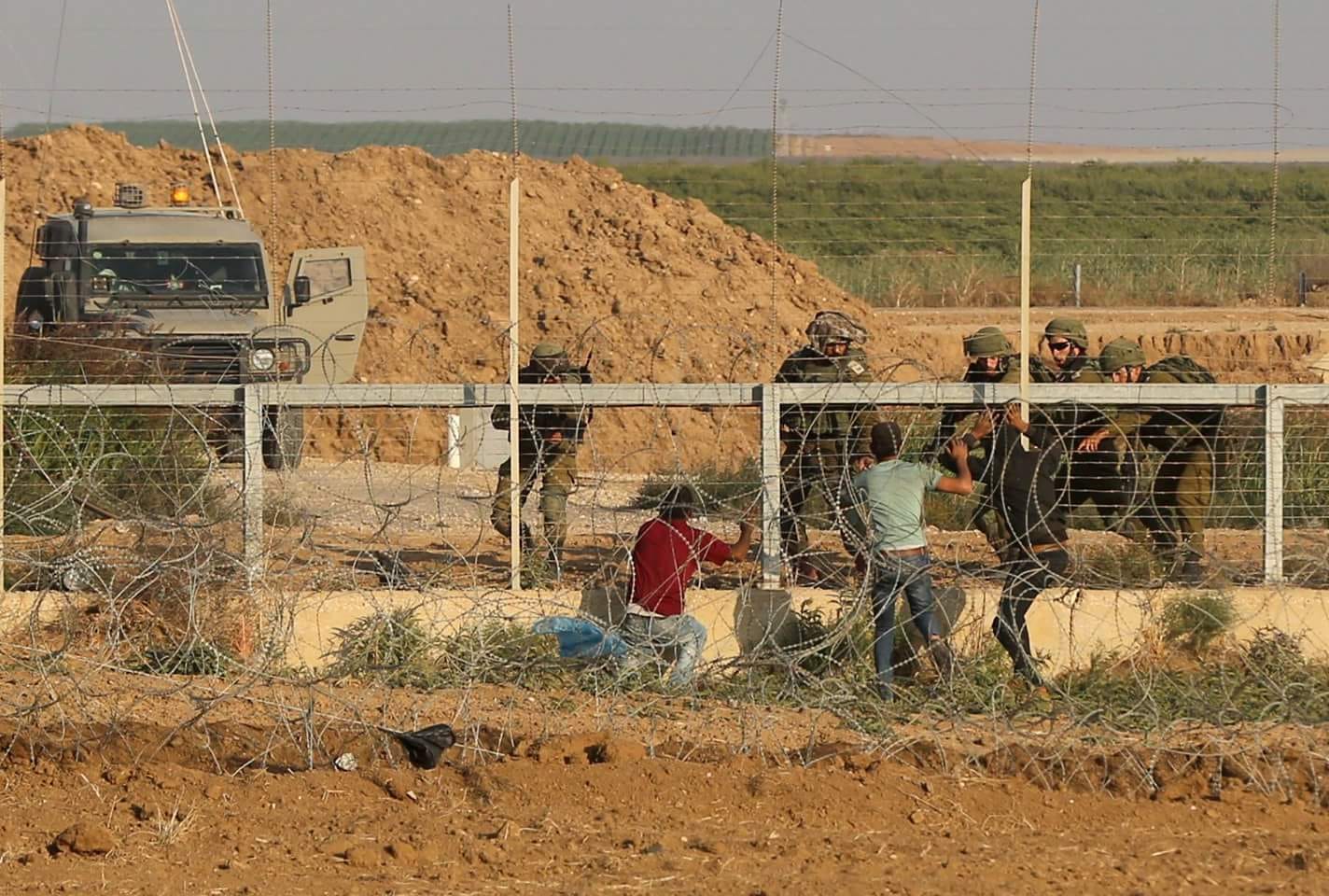 Baalousha advanced further toward the fence, and when he was approximately 150 meters away, he took cover behind a sand hill. He proceeded to wave his flag, rallying others to advance alongside him. As his courage inspired some of his fellow protesters to push forward, an Israeli sniper opened fire on Baalousha and shot him in the leg with an explosive bullet, knocking him to the ground.

He quickly mustered up his strength and dragged himself back toward the crowd.

The medics arrived, placed him on an orange stretcher and rushed him to the makeshift medical station that had been set up back at the Malaka base camp.

He received first aid there, but his serious condition meant that he had to be referred to Shifa Medical Complex. 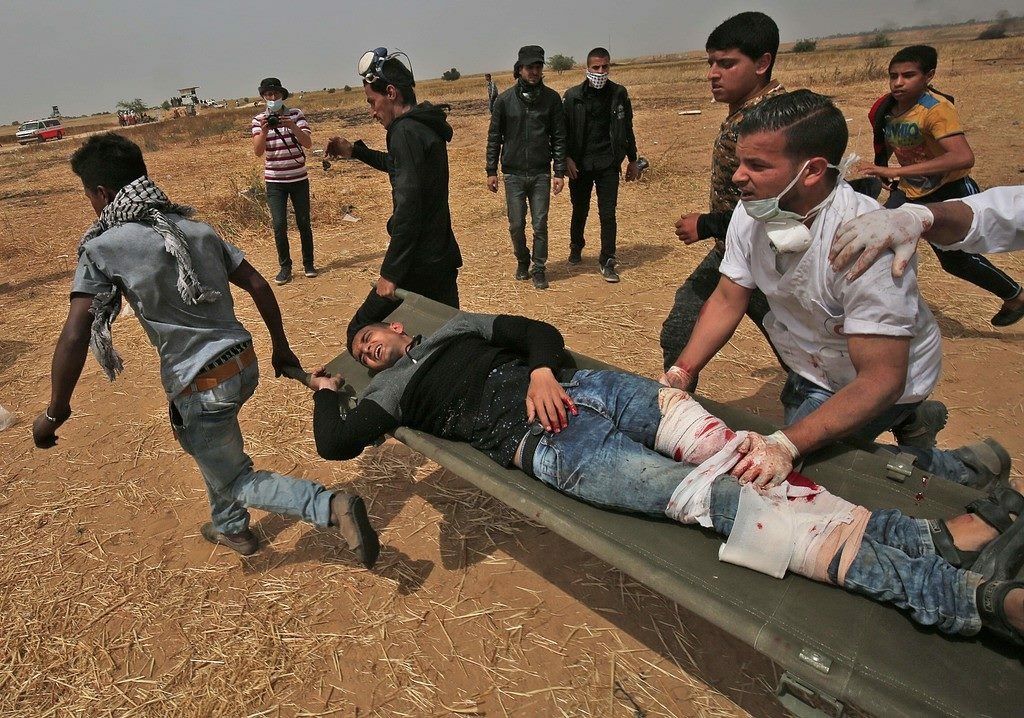 Minutes before the sun set over Mediterranean Sea, Baalousha, a Jabalia Refugee Camp resident whose family was displaced from their hometown, the occupied city of Asqalan, in 1948, regained consciousness in an operating room to find his right thigh in a metal cast.

This was not the only shock he would receive that day. Due to the severe shortage of hospital beds and essential medical supplies, the hospital administration had already handed his family his discharge paperwork. He was required to leave the hospital immediately. Despite his family’s best efforts to find a place for him, the strain placed on the hospital by the growing number of casualties meant it was unable to provide Baalousha with postoperative care.

“I realize that hospitals are suffering from a severe crisis. But to be sent home on the same day as my surgery, just two hours later? I felt like I was hit twice — once by the sniper and once again by this crisis,” Baalousha says, voice trembling. He falls silent and gestures with his hand to indicate that our interview is over.

Soaad, Baalousha’s mother, picks up the conversation. “We appealed to the hospital administration to let Bahaa stay, offering to cover the costs ourselves, but they refused,” she says as she dries her eyes. “We will try to buy a hospital bed for the rest of his recovery.”

Baalousha’s story is only one of hundreds taking place in Gaza hospitals, which are unable to provide the minimum requirements for patient care. No patient stays in any hospital long enough to receive adequate treatment. 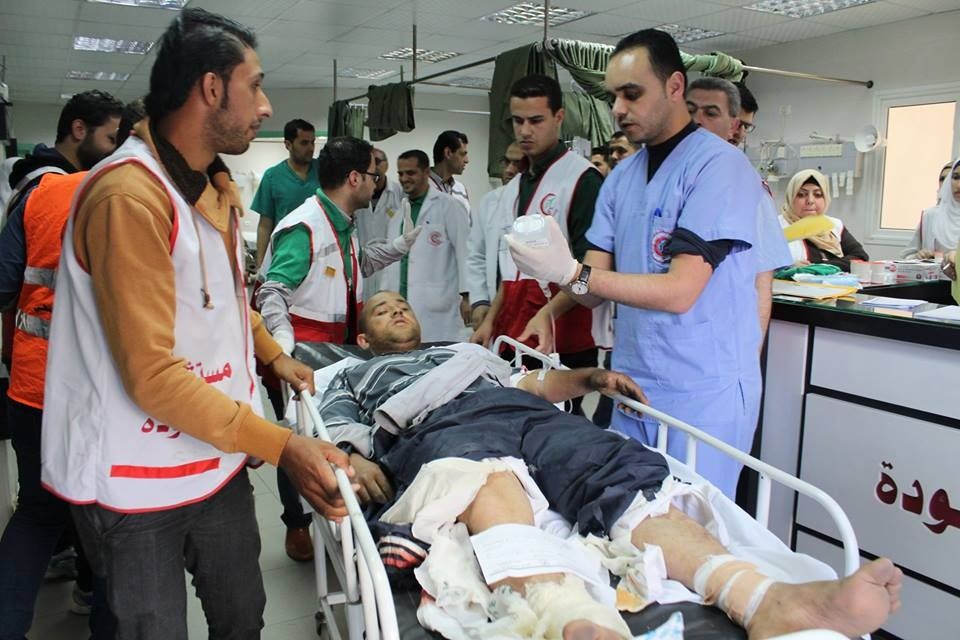 Mada Masr visited several hospitals, all of which are facing the same dire conditions. The situation is particularly acute at the Shifa Medical Complex and the Indonesia Hospital in the north, where doctors are performing back-to-back surgical operations without breaks. A tent has been pitched in the courtyard of the Shifa complex to accommodate the overflow of patients, and injured protesters are being treated on the ground due to the critical space shortage.

The Gaza Health Ministry, the Committee for Health Emergencies and several international organizations issued a press release on Tuesday estimating that medical facilities have exhausted almost 50 percent of crucial medications and medical supplies. This has severely impeded their ability to offer adequate treatment and forced many patients to buy their own painkillers and antibiotics, if they are able to find them.

According to the statement, the supplies urgently required to address Gaza’s health crisis would cost US$19.5 million.

Abdel Lateef al-Hajj, the head of the General Directorate of Hospitals, tells Mada Masr that medical supplies are currently being consumed at 10 times the usual rate, particularly sterilizing equipment, solutions, anticoagulants, antibiotics and intravenous antibiotics. Hajj adds that the number of external fixation devices used in past weeks was intended to cover hospitals needs’ for the entire year.

The United Nations Special Coordinator for the Middle East Peace Process Nickolay Mladenov briefed the UN Security Council from Jerusalem, saying that hospitals in the strip “report an unfolding crisis of essential medical supplies, drugs and equipment needed to treat the injured.” Mladenov stressed that the Shifa hospital must be urgently provided with medications to save the wounded.

The demand for operating rooms and inpatient departments triggered by the hundreds of protesters injured in the Great March of Return demonstrations has forced the Gaza Health Ministry to postpone 4,000 scheduled surgeries.

Seven fully equipped ambulances were deployed to the Rafah Border Crossing to transport the wounded to hospitals in Arish, Bir al-Abd, Sheikh Zuwayed and Rafah to receive treatment, according to Rady. On Tuesday, his Gazan counterpart announced that two Palestinian Health Ministry ambulances were damaged in the protests.

According to the Monday press release, a shipment of 25,000 items, including 58 types of medications and solutions and a sizable stock of medical supplies for various surgeries were prepared for delivery to the Gaza Strip. 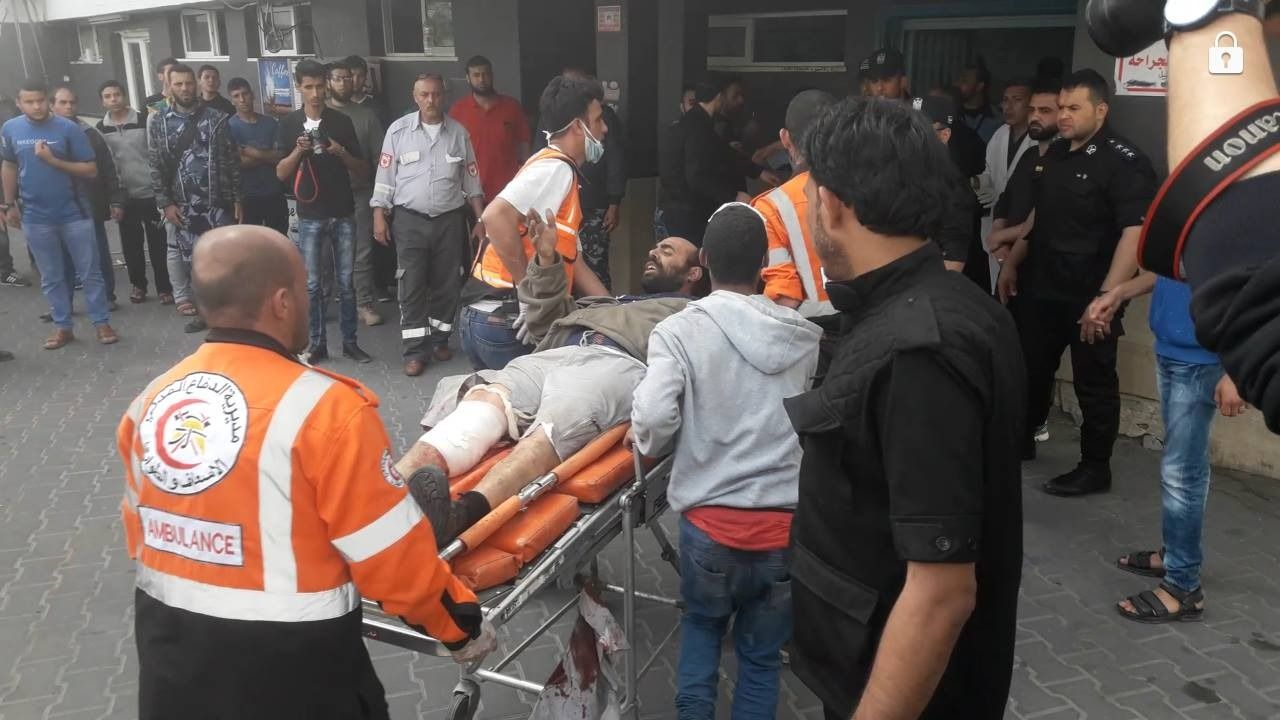 Besides the dead, there are over 3,500 casualties from this week’s marches, primarily due to injuries related to gas inhalation and the use of live ammunition. Medics haven’t been spared: Ten first responders suffocated from gas inhalation, according to Qidra’s Tuesday announcement.

The nature of the wounds have also rendered adequate treatment harder.

The Israeli newspaper Haaretz cited Palestinian and foreign doctors serving in the Gaza Strip as reporting that approximately 1,700 Palestinians have suffered live-fire wounds while taking part in the Great March of Return protests between March 30 and mid-April. Shifa Hospital doctors said they have not seen such severe wounds since the 2014 war, the newspaper reports.

“The injuries sustained by patients will leave most with serious, long-term physical disabilities” due to their “devastating […] unusual severity,” reads a report by Médecins Sans Frontières (MSF).

“Half of the more than 500 patients we have admitted in our clinics have injuries where the bullet has literally destroyed tissue after having pulverized the bone,” said Marie-Elisabeth Ingres, the head of MSF’s Palestine mission, in the report. “These patients will need to have very complex surgical operations and most of them will have disabilities for life.”

Israel has been firing at protesters with live ammunition, including ballistic and silvertip bullets as well as the prohibited-for-use-in-war exploding rounds, according to a report prepared by the Euro-Mediterranean Human Rights Monitor. The consistency of targeting suggests that Israeli forces may be shooting with the intent to cause physical disabilities, aiming at protesters lower limbs with explosive bullets, which are easily able to penetrate flesh and shatter bones, causing more severe injuries. 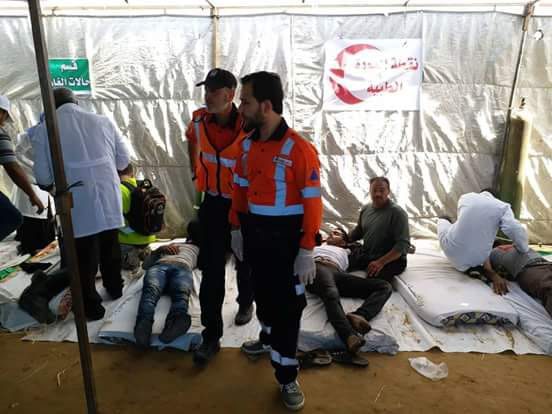 Footballer Mohamed Ebeid, 23, is one of the protesters whose lower limbs were targeted. Israeli forces injured both of his feet during the demonstrations. He previously played for the local Salah Sporting Club. Doctors have told him, however, that while his injuries will heal in seven to nine months, he will never be able to play football again.

The consequences of Ebeid’s injuries go beyond the physical and the psychological. He and his family have now lost their source of income, resulting in an economic strain that will be more keenly felt given the ongoing siege of the Gaza Strip and the persistence of sanctions imposed by Palestinian Authority President Mahmoud Abbas in March 2017, as a result of the failing reconciliation deal with the Hamas government.

“I never thought my football career would end like this,” says Ebeid. “But this is the price you pay for being a Palestinian and not ceding your land.” 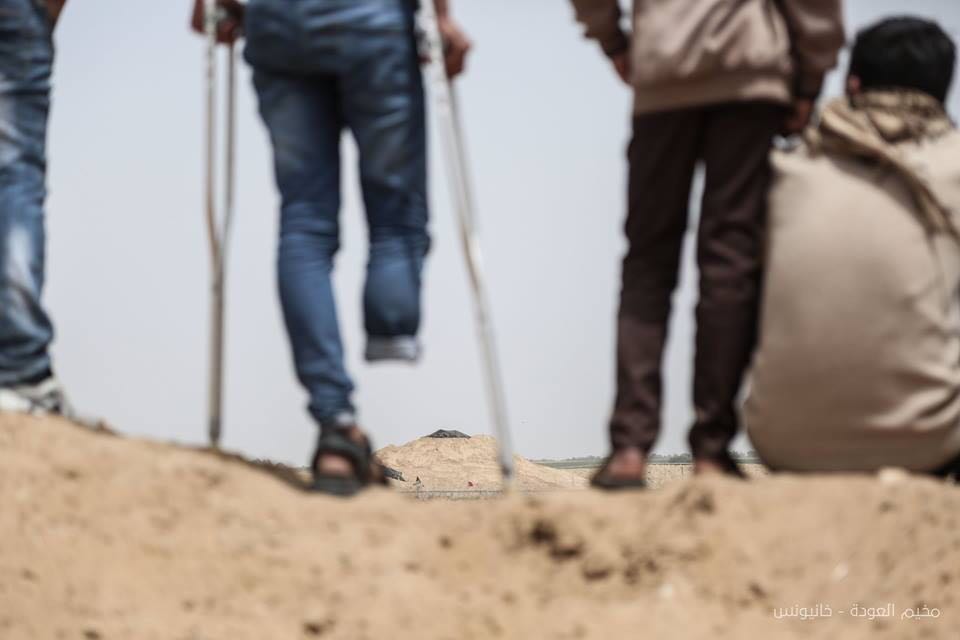 AD
You Might Have Missed
Where do old lesbians go to die?
What we talk about when we talk about trees
Carbon Colonies & A Green New Deal
Mugamma revisited: Reimagining the building and the square
AD
Hamza Abu Eltarabesh
11 articles on Mada

Topics
Related
attack on Gaza
Prelude to Israeli violence in Great March of Return: Hamas-Egypt meeting fails to bring truce
Hamza Abu Eltarabesh | Source: Hamas accepted EU proposal via Egypt to lift siege on Gaza but Egypt refused
Gaza
Waiting for war: The siege on the people of Gaza tightens
Shireen al-Akkah | In Gaza, death does not seem like the most tragic fate
Egypt-Palestine relations
Egypt’s role in Gaza: Putting disagreements aside
Omar Said | Palestinian reconciliation efforts take a step forward as Palestinian PM arrives in Gaza
attack on Gaza
To act or not to act like a state
Sharif S Elmusa | Scrolling through pictures on the Internet the other day in the middle of Israel’s bombardment of Gaza,