By
Shawkan
Translated by
Hadeer El-Mahdawy

Detained photojournalist Mahmoud Abu Zeid (Shawkan) wrote the letter below from prison, after he was awarded the United Nations Educational, Scientific and Cultural Organization (UNESCO) 2018 press freedom prize on May 3, which marks World Press Freedom day.

UNESCO held a ceremony in Ghana to mark the occasion, reserving two seats for Shawkan: one with a giant photo of him and the other with the prize — a certificate of appreciation worth US$25,000.

On April 23, UNESCO announced that Shawkan had been chosen as the recipient of the prize for “his courage, resistance and commitment to freedom of expression.”

The announcement came one day after Egypt’s Foreign Ministry issued a statement condemning his likely nomination, claiming that considering the photojournalist for the award was “disrespectful to the rule of law and to the judicial procedures against the defendant.”

Shawkan was arrested on August 14, 2013, while photographing the violent dispersal of the Rabea al-Adaweya sit-in in Cairo by security forces, which resulted in the death of more than 1,000 protesters in one day. He is facing several charges that could lead to his life imprisonment.

The case involves Shawkan and 739 defendants, who face charges including premeditated murder, illegal gathering and vandalism. 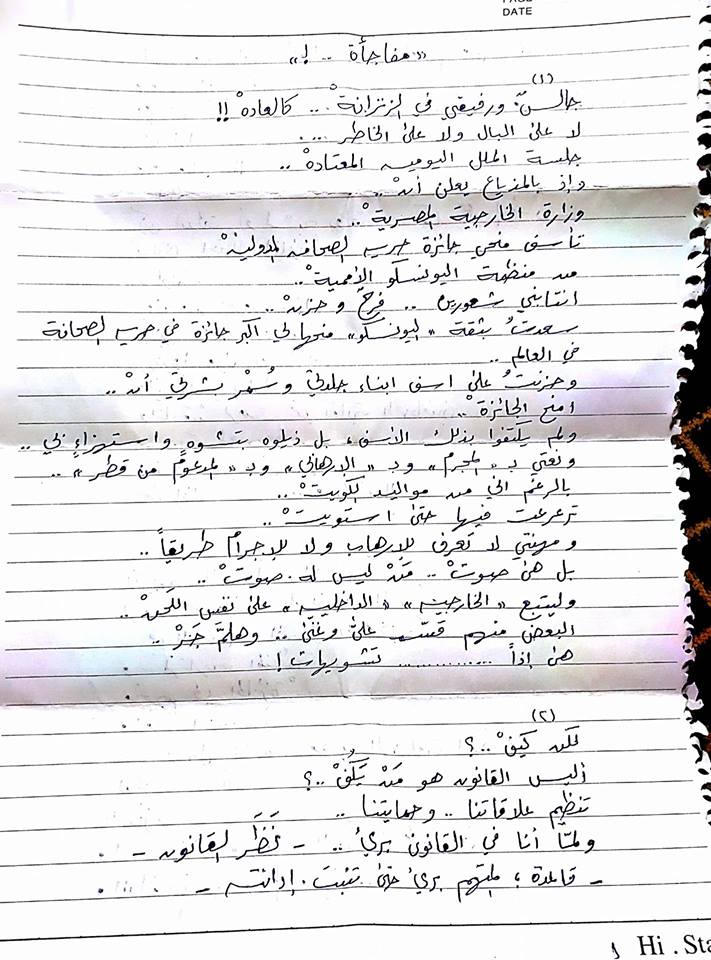 Sitting with my cellmate, nothing on my mind;

When the radio announces that Egypt’s Ministry of Foreign Affairs regrets my being awarded UNESCO’s press freedom prize.

I was happy about UNESCO’s confidence in me, about being awarded the biggest prize in press freedom worldwide.

And I felt sad about the disappointment of my fellow [compatriots], who share my skin color, over my receiving the award.

Unfortunately, this was not enough for them. They defamed and degraded me, called me a “criminal,” a “terrorist,” “a recipient of Qatari money,” even though I was born in Kuwait and grew up there.

My profession does not know terrorism or crimes; it’s the voice of the voiceless.

Let the Foreign Ministry sing the tune of the Interior Ministry.

Some have played and some have sung, and so it goes.

Isn’t the law enough to regulate our relationships and our lives?

Since I am innocent by law, which — as a principle — regards defendants innocent until proven guilty, how did officials judge me before the court?

What if I were acquitted? Or is it a preemptive step to influence the court’s decision? 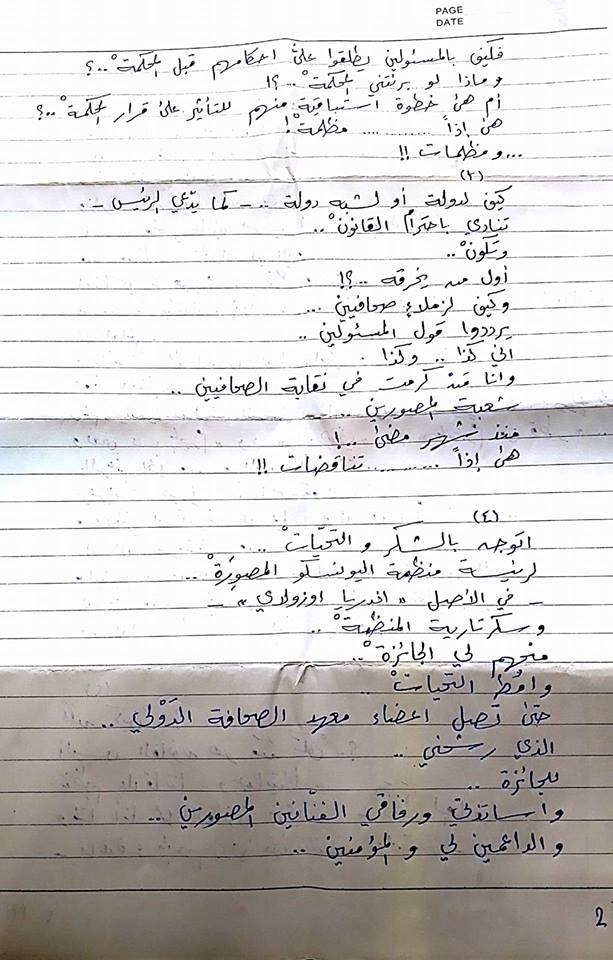 How does a state or a quasi-state — as the president claims — demand that the law be respected, while being the first to violate it?

How do my fellow journalists echo what officials have said about me, even though I was given an award by the Journalists Syndicate a month ago?

I would like to express gratitude to the director general of UNESCO, Audrey Azoulay, who’s originally a photographer.

And to the secretary of the organization for giving me the award.

I extend my greetings to the members of the International Press Institute for nominating me for the prize.

And to my mentors and my colleagues, who support me and have believed in my innocence since my arrest.

Kisses to my family, and to my love and my friends.

I dedicate this prize to Radwa and Gad. 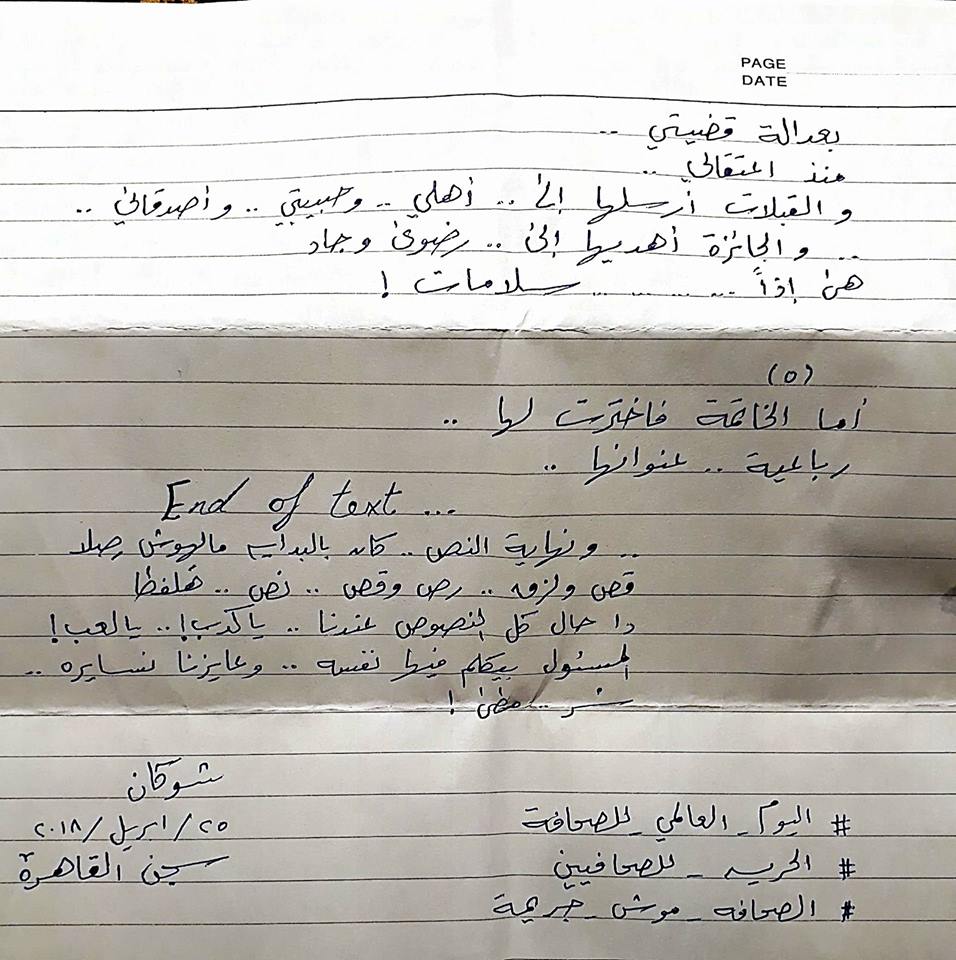 To conclude, here’s a quatrain titled “End of text.”*

“End of text” was initially irrelevant.

Copying and pasting, cutting and stacking,

This is the case with all our texts, they’re either lies or tricks!

The official is talking to himself, and he’s asking us to go along with him.

*In 2015, after 12 Mexican tourists were mistakenly shot in Egypt, Foreign Minister Sameh Shoukry said “end of text” in a press conference to let audiences know he was done with his speech. The incident triggered a stream of sarcastic commentary on social media.

AD
You Might Have Missed
Mugamma revisited: Reimagining the building and the square
Carbon Colonies & A Green New Deal
What we talk about when we talk about trees
Where do old lesbians go to die?
AD
Shawkan
4 articles on Mada

Topics
Related
freedom of the press
Under siege: To be a journalist in Egypt
Hadeer El-Mahdawy | Journalists are working under tough conditions in Egypt, with poor pay and lack of protection
prison letters
Shawkan: How can Egypt lead UNESCO?
Shawkan | From prison, Shawkan criticizes the nomination of Moushira Khattab for director of UNESCO
prison letters
Shawkan: ‘As if’ the state were concerned with the right to communication
Shawkan | Photojournalist Shawkan, in detention for 4 years, on the right to communication
Shawkan
Shawkan’s place: Between memory and hope
Leena ElDeeb | Shawkan's family, surrounded by photographs of him, are still clinging to hope