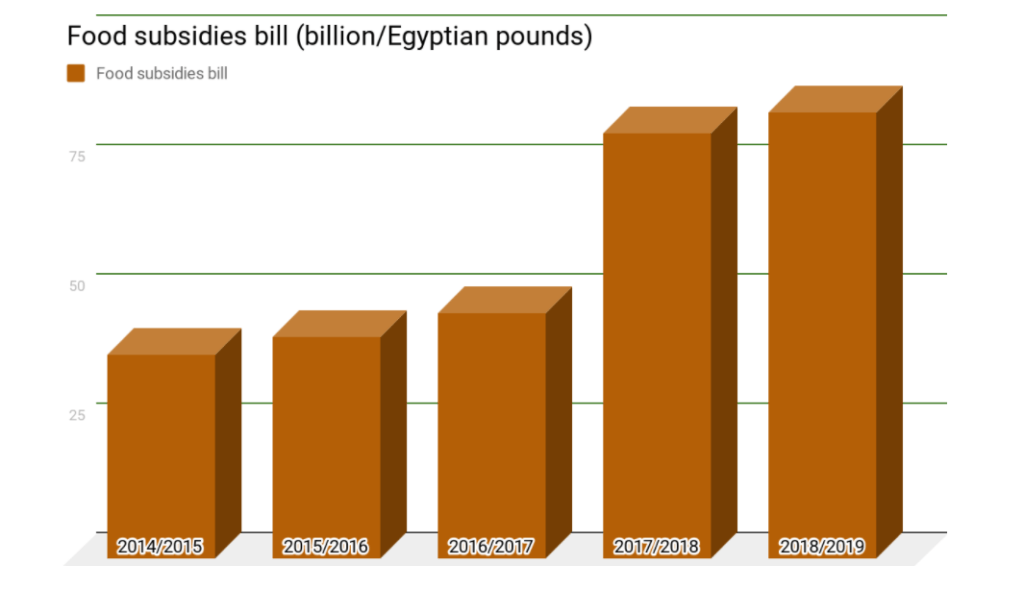 Food subsidies will increase by a marginal 5 percent in the upcoming state budget for financial year 2018/19, as the government continues to implement austerity measures designed to reign in its budget deficit.

Critical to the social safety network intended to ease the impact of Egypt’s structural adjustment program, food subsidies will amount to LE86 billion in the upcoming fiscal year, representing just a 5 percent increase from the previous fiscal year allocation, according to the FY 2018/19 state budget bill currently under discussion in Parliament, a copy of which Mada Masr has obtained.

The increasing cost of food was among the most significant drivers of surging inflation rates in recent years. The food and beverage sub-index within the basket of goods of the Consumer Price Index (CPI), which examines the average price of a number of key consumer goods and services, soared to above 40 percent in July of last year. Experts have previously noted that the rapidly increasing price of food was a result of the value-added tax, which was implemented in August 2016 and increased by 1 percent at the start of FY 2017/18, as well as successive hikes in the price of fuel. 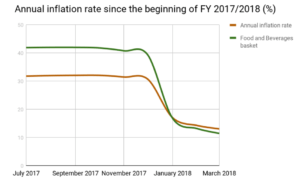 The current government first rolled out austerity measures in 2014, as President Abdel Fattah al-Sisi stepped into office, cutting energy subsidies, implementing new consumption taxes and increasing customs tariffs. These were followed by a more wide reaching structural adjustment program in November 2016, agreed upon by the government and the International Monetary Fund (IMF). In return for a US$12 billion IMF loan, Egypt ushered in the flotation of the Egyptian pound and the liberalization of the economy more broadly. Negotiations with the IMF began following the 2011 revolution, but consecutive governments stalled, fearing pushback due to the program’s negative impact, which disproportionately affects Egypt’s poor.

Consequently, the government attempted to ease the burden of austerity measures by implementing a social safety net, whereby cash subsidies targeted at the poorest portion of the population would replace universal energy subsidies, cash subsidies included the Takaful conditional cash transfer program, as well as the food subsidies scheme.

The current food subsidy scheme was implemented in 2014 to replace the older, in-kind scheme, through which households were allocated specific quantities of sugar, rice, cooking oil and an unlimited number of bread loaves at subsidized prices. The new scheme, however, offers households cash subsidies to buy any food item at market rates, as well as a rationed quantity of five loaves of bread per person per day, sold at a subsidized price.

Aside from this marginal increase in food subsidies, the government is more focused on cutting fuel and electricity subsidies in FY 2018/9, with some experts predicting three rounds of fuel price hikes to occur over the next 18 months, with an average increase of 30-35 percent each time. The burden of the hike would mostly fall on diesel and 80-octane fuels, which receive the largest portion of the subsidies and are predominantly used in the transportation of people, goods and services.

The number of food subsidy beneficiaries is expected to drop by 2 million, according to government projections stipulated in the state budget bill, while the beneficiaries of bread and floor subsidies are expected to increase by 3 million. 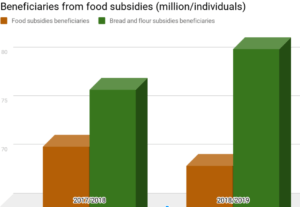 “This figure is flexible due to new entrants and exits [from the subsidy scheme] and has nothing to do with elimination. Even the [FY 2017/18] projection of 71 million individuals was not realized. The current figure is around 68 million beneficiaries. This is a result of new people entering and others leaving whether due to the their death or travel. The figure is flexible in the range of between 70 and 68 [million individuals] and changes daily,” Mohamed Soweid, a Supply Ministry spokesperson, told Mada Masr in an effort to explain the projected drop in the number of food subsidy beneficiaries stated in the FY 2018/9 state budget bill.

As for the number of bread and flour subsidy beneficiaries, Soweid said that the projected figure is not final and therefore does not indicate a real expansion in the number of beneficiaries. The difference between beneficiaries of food subsidies and those of bread and flour subsidies is that, in the period between 2013 and 2015, entry into the food subsidy scheme was closed, and so newborns or anyone other new entrants would only be admitted into the bread subsidy scheme, explained Soweid.

However, the wide reach of the food subsidy scheme is alarming to the government, as is evident in the FY 2018/9 state budget bill, which states that government “is required to achieve a higher level of spending efficiency in the budget by reviewing the databases [of beneficiaries] in order to raise the cash subsidy, without needing new sources of funding.” It remains unclear, though, whether the value of cash allocations to households under the food subsidy scheme would increase in the coming period. 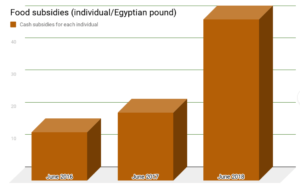 Topics
Related
2018/19 budget
Real wages for public sector employees drop in FY 2018/19 state budget
Public sector employees in Egypt are in line for the largest wage increase they have received in the
2018/19 budget
How to make LE89 bn in fuel subsidies disappear: Egyptians brace for steep price hikes
Waad Ahmed | What will it mean for Egypt to try to meet the 2019 deadline for liberalizing fuel prices?
Economy op-eds
Do economic indicators reflect reality for most Egyptians?
Michel Assaad | Growth amid inequality and corruption only ever benefits a limited number of people
2017 year enders
How to cover a post-shock economy?
Maye Kabil | A year in review of our economy coverage