Growing up in Port Said, you hear endless stories of a time when the streets of the city became battlefields, and guerrilla fighters warded off British, French and Israeli paratroopers in displays of courage that have passed into local legend. Henry Barakat’s Lailat al-Qabd Ala Fatima (The Night They Arrested Fatima, 1984), based on a 1980 short story of the same name by Sekina Fouad, is one such story, but it is also one of heartbreak and severed family bonds.

Barakat engages viewers from the very first scene: Without seeing him, we hear a man bark orders to head to Port Said and bring in a woman, set against the image of a large, ornate palace. With this, Omar Khairat’s suspenseful music carries us to the visually distinctive seaside world of Port Said, where fishermen’s huts and colorful boats line the Suez Canal, and the score smoothly blends with the local semsemeya tunes.

Fouad’s short story opens with a description of quails migrating across the skies of Port Said, only to be caught in hunters’ nets where they eventually take their last breaths in foreign lands. The film’s introduction of Fatima (Faten Hamama) is similarly poignant. We see an old woman walking on a beach, freeing quails from the nets that are spread along the shore of the Mediterranean. She receives news that two men have come to Port Said asking for her and she hurries to her neighborhood in search of Sayed (Shokry Sarhan), a respected fisherman she has loved since her youth.

As we follow Fatima through the streets back to her apartment, we hear her conversations with the people of the city and their heavy accents help establish Port Said as its own unique world. In contrast, in the speech of other characters, such as Fatima’s journalist neighbor, Abboud (Mamdouh Darwish) as well as her younger brother and sister, this accent is barely noticeable. In highlighting this distinction, the director contrasts the characters who have experience living in Cairo, have been influenced by urban culture and are well-educated; against those who have only ever lived in Port Said and therefore may have been exposed to fewer economic and educational opportunities. With this attention to detail, Barakat adds life to the story in a way that goes beyond Fouad’s original text.

Through a conversation with Abboud, it is revealed that Fatima is not on good terms with her brother, Galal, a high-ranking official in Cairo who we later come to learn is revered as a hero by local residents. In a surreal flashback, we see Fatima emerge from the sea after being thrown in by Galal’s henchmen. Both scenes serve as a subtle introduction to Galal’s character and set the tone for the story of betrayal and sacrifice that Fatima later recounts.

Fatima is confronted by the two men her brother has sent to capture her, following through on threats to have her committed to a psychiatric institution, and she flees to the rooftop of her building, threatening to throw herself off. It is in this position that Sayed finds her and following his arrival, she begins to recount her story with captivating eloquence. Through Hamama’s delivery, Fouad’s words, adapted as dialogue for the film by Abdel Rahman Fahmy, take on a new meaning.

Her monologue is accompanied by a series of flashbacks, the first of which shows Fatima caring for her brother and sister after their mother dies. She gives up on her dream of marrying Sayed and we watch him sail away to work abroad as she bids him farewell from the shore, having decided to remain with her siblings at the last minute. It is a memorable scene in which Barakat takes full advantage of the picturesque location and Onsy Abu Seif’s authentic production design, creating a beautiful frame of Sayed’s silhouette set against a pink-hued sky hanging above the Suez Canal.

Sayed (Shokry Sarhan) sails away to work abroad in The Night They Arrested Fatima, 1984

This poeticism is echoed in Fatima’s language as she recalls the secrets of the past. Heavy with metaphors and symbolic references, her monologue colors the melodramatic story with a fantastical touch, setting it apart from more traditional approaches to realism. This exaggerated, “epicized” storytelling is typical of how the people of Port Said are usually represented in Egyptian popular culture, with a notorious appetite for tall tales.

Fatima’s story takes us to 1950s Port Said, a city under British occupation. Here, we are introduced to Galal, a child prodigy and haggler by nature, he has a quick wit and the ability to “turn sand into gold,” as Fatima says. During his adolescence, Galal develops his forgery skills to profit off of the occupation. With the nationalization of the canal and the war that follows, he begins to exploit members of the resistance as well. In one of the film’s remarkable scenes, Fatima confronts her brother after she finds out about his counterfeiting business. Hamama’s skilful acting is matched by Mohie Eddin’s confident performance, perfecting the young Galal’s bad boy persona. Emphasizing the generational gap between the two characters, the scene also encapsulates the moral conflict at the center of the film, pitting Galal’s greed against Fatima’s integrity.

The rift between them grows when Galal tricks members of the resistance movement into believing he would transport ammunition to partisans held under siege at Port Fouad, only to abandon them when the time comes. It is a turning point, as Fatima is forced to step in to fulfill her brother’s promise and later feels obliged to lie in order to keep his reputation intact. Galal takes the credit for aiding the resistance and we finally come to understand why the city’s residents admire him so much, and why they resist Fatima’s version of the story.

The violent confrontation between Fatima (Hamama) and Galal (Mohie Eddin) in The Night They Arrested Fatima, 1984

The sequence where Fatima carries the explosives through the dark, tense Port Said night and across the ferry to Port Fouad marks the peak of Hamama’s performance. In fact, Hamama’s Fatima is arguably one of the most exceptional representations of women in Egyptian cinema. She is steadfast, impulsive and hot-tempered, as is shown when she vows to kill Galal after she learns he sent his men for her. This is a far cry from the more traditional portrayals of an ideal woman that the actor was known for in her younger years. Hamama’s identification with the character is evident in the command she exercises over her body language and facial expressions, conveying suppressed emotion at times and emphatic outbursts at others.

The chemistry between Barakat and Hamama, who had previously collaborated on several Egyptian film classics (including The Nightingale’s Prayer, 1959 and The Sin, 1965) extends to the rest of the cast. Even secondary performances, such as veteran actress Naima al-Saghir’s portrayal of Fatima’s elderly neighbor, Um Rawheya, demonstrate an overarching harmony between the cast and their director. 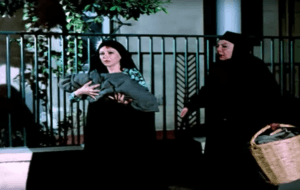 The soundtrack, too, contributes to the immersive experience that is The Night They Arrested Fatima. In addition to Khairat’s signature music, Barakat uses overlapping narration and sound effects to merge the past and the present in a manner that is consistent yet disorienting, evoking the blurry lines between truth and lies.

Equally blurry now are the tales that remain from that turbulent time on the canal. The peculiar heroics of the war fought on the streets of Port Said are gradually being lost in time and the last men and women of the resistance are disappearing from our midst. This is where the importance of a film like The Night They Arrested Fatima lies. It captures the essence of a people and a city at a crucial moment in its history, and gives voice to forgotten heroes, like Fatima, on whose shoulders politicians climb, exploiting the need for well-groomed idols; distorting history as they go.

AD
You Might Have Missed
What we talk about when we talk about trees
Mugamma revisited: Reimagining the building and the square
Where do old lesbians go to die?
Carbon Colonies & A Green New Deal
AD
Hessen Hossam
12 articles on Mada