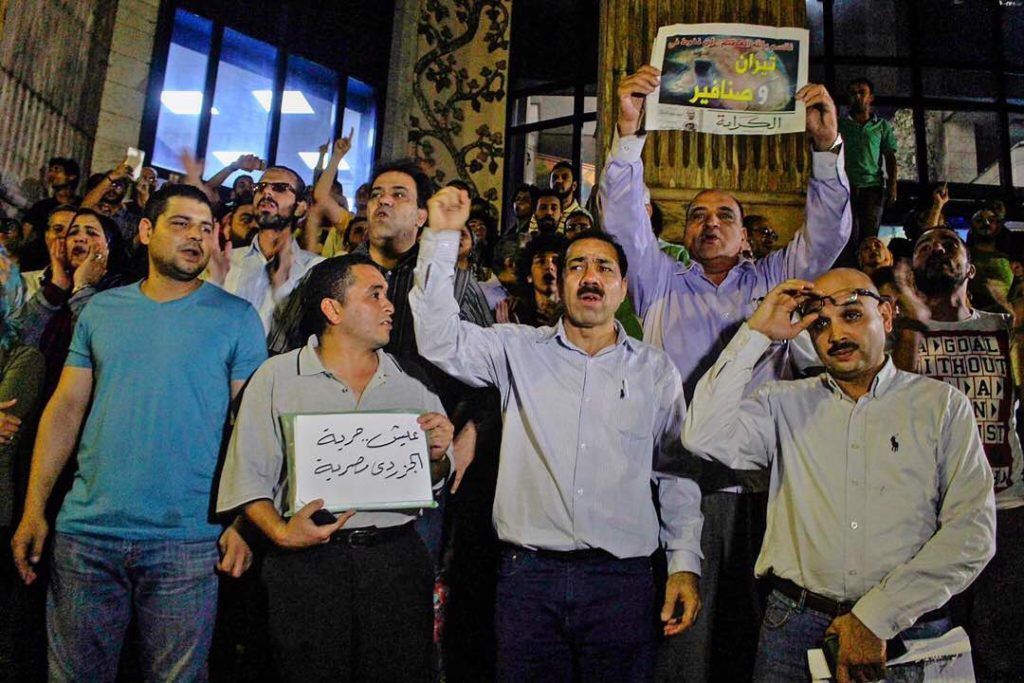 The charges pertain to a protest that took place on June 14 of last year in the Alexandria neighborhood of Miami and was held in opposition to the maritime border agreement with which Egypt ceded sovereignty of two Red Sea islands, Tiran and Sanafir, to Saudi Arabia.

The three defendants were sentenced to three years in absentia last December.

Activist Mahienour al-Massry and Bread and Freedom Party member Moatasem Medhat were sentenced to two years in prison in the same case. However, they were acquitted and released from prison in January, after spending almost two months in detention.

Together, the five defendants faced charges of assembly, protesting without a permit, a show of force and insulting the president.

President Abdel Fattah al-Sisi ratified the maritime border demarcation agreement on June 24 of last year, after it passed through a landslide vote in Parliament on June 14, with only 119 MPs voting against it.

Days ahead of Parliament’s discussion, several political parties and prominent politicians announced a series of sit-ins protesting the vote, and on the morning of June 14, journalists staged an unsanctioned sit-in within the Journalists Syndicate headquarters.

In the following months, security forces carried out an extensive arrest campaign across several governorates, targeting more than 120 activists and protesters seen to oppose the deal.

On March 4, following a legal contest over the Tiran and Sanafir agreement, the Supreme Constitutional Court issued two verdicts that effectively overturned previous rulings and were in favor of ceding the islands.

The issue of jurisdiction arose when, in June 2016, the Court of Administrative Justice (CAJ) issued a ruling which annulled the agreement signed by Prime Minister Sherif Ismail in April that year. This was followed by two court of urgent matters rulings on September 29 and December 31 to overturn the CAJ’s decision.

However, on January 16 of the following year, the Supreme Administrative Court ruled to uphold the initial June ruling, stating that the deal was a cession of territory, an act that is prohibited by Article 151 of the Constitution. On April 2, the Cairo Court of Urgent Matters overturned the CAJ’s decision and ruled in favor of the agreement, despite lawyers’ claims that such a decision falls beyond the jurisdiction of urgent matters courts.