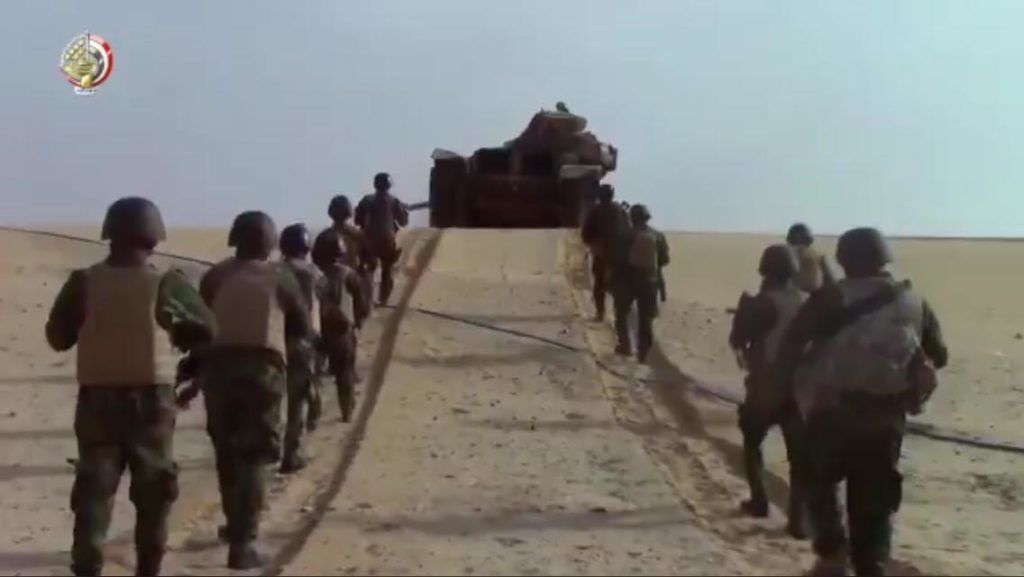 The militant group Province of Sinai released a video on Friday claiming that the joint counterterrorism campaign launched by the police and military over a month ago has failed to achieve any results. Much of the footage they used, however, is from 2016 and 2017.

The video, titled “The Failed Confrontation,” follows a previous release “Protectors of Sharia,” which was published two days into Operation Sinai 2018 and warns Egyptians not to participate in the 2018 presidential election, stating that democracy is “apostasy and idolatry.”

At 26 minutes long, this most recent video includes footage of militant checkpoints set up on the Arish-Qantara International Road in North Sinai and attacks carried out against security checkpoints in the governorate, as well as depicting the day-to-day lives of members of the militant group. It reiterates the group’s previous warning to citizens against participating in the election, and calls for military and police personnel to defect and join the group.

While the material included in the video is intended as evidence of the failure of Operation Sinai 2018, most of the events shown took place before the launch of the military campaign, and some of the scenes depicted are over a year old.

The last attacks that the Province of Sinai, which is mainly active in the cities of Arish, Rafah and Sheikh Zuwayed, successfully carried out on permanent checkpoints took place south of Sheikh Zuwayed in October 2017.

The militant group further attempts to demonstrate its ability to successfully carry out operations in North Sinai’s capital city in a segment titled, “A glimpse at the security operations in the city of Arish.” But, as with the bulk of the video, many of the events shown occurred before the start of the recent military operation. It includes footage of two incidents from over a year ago: one is the killing of a commissioned police officer and a commissioned military officer on Qahira Street in Arish on August 22, 2016; the other is the January 2017 attack on an armored police vehicle in the center of Arish, in which the vehicle was seized and the police personnel killed.

While the video attempts to highlight the group’s successes, the last attack carried out by Province of Sinai militants in Arish from which the assailants successfully escaped was a December 2017 attack on security personnel posted outside the Egyptian Arab Land Bank in the city center.

This use of old footage raises questions regarding the group’s current activities and its ability to continue to carry out the kind of large-scale attacks they have highlighted in promotional videos released since it pledged allegiance to the Islamic state in 2014.

The Province of Sinai communications networks may also have come under strain recently as the Armed Forces have reportedly destroyed three media centers since the start of the operation.

The recent video also includes footage of ambushes set up by the group west of Arish on the Arish-Rafah International Road. One was set up early January, prior to the launch of Operation Sinai 2018, and killed three military and police personnel and a civilian who worked with the Armed Forces. The other attack was carried out during the military campaign, killing two conscripts and one civilian and injuring another civilian on March 20.

The video released on Friday states that the “growth of the caliphate soldiers’ reach and the increasing number of new recruits joining the ranks of mujahideen” is the motive behind Operation Sinai 2018, a message the Province of Sinai was also keen to emphasize in its two previous videos.

By prominently featuring Egyptian and Palestinian affiliates from outside Sinai, the group seems to be trying to signal that it is capable of enlisting and transferring fighters, despite the heightened security measures enforced by the Egyptian military within Sinai, and by Hamas on the border with the Gaza Strip.

Following the launch of Operation Sinai 2018, the military closed all roads leading to North Sinai and imposed severe restrictions on food imports into the governorate’s cities, especially those where the Province of Sinai is most active. A severe food shortage ensued, heavily impacting the civilian population.

The decision to show members of the Province of Sinai preparing food in the most recent video — one member is shown milling wheat and another can be seen preparing a dessert — is likely an attempt to show that these security measures have not had a negative impact on the militant group’s daily activities.

The video also includes a few seconds of footage of mosques, accompanied by the brief description: “Mosques of idolatry, where others besides Allah are worshiped.” A mosque affiliated with a Sufi order in Rawda village was attacked in November last year. The attack, which took place during Friday prayers, left over 300 people dead and no group has claimed responsibility for it.