The military spokesperson released the 16th statement on the comprehensive military operation in Sinai on Monday, where he showcased the results of the operation over the five previous days. In a related context, the same five days witnessed several incidents relayed by North Sinai residents to Mada Masr.

In his statement, the military spokesperson said that forces participating in the campaign killed 36 “takfiris” and announced the death of an officer and three conscripts. Rifai did not mention the details surrounding the death of Armed Forces personnel, only saying that they were killed “as a result of fighting in the perimeter of the operation.” According to witnesses however, the conscripts were killed in an ambush set up by the Islamic State militant group the Province of Sinai.

An eyewitness who spoke to Mada Masr says that members of the organization set up a checkpoint on the Arish-Qantara International Road, west of the North Sinai capital, on March 14, stopping cars, searching them and checking citizens’ IDs.

The eyewitness was riding in one of two cars affiliated with the education directorate when they were stopped at the Province of Sinai checkpoint. Upon searching the cars, the militants found two military conscripts returning from leave who were riding in the government car from Bir al-Abd city en route to Arish.

According to the witness, the militants killed the conscripts at once and made the driver and another civilian get out of the car, warning them not to transport any members of the police or Armed Forces. The militants than shot both the driver and the civilian, delivering intentionally non-fatal but debilitating gunshot wounds, before departing. While the driver was able to navigate the car to the nearest security checkpoint, he died before he could be transferred to the hospital.

A medical source, who spoke to to Mada Masr on condition of anonymity, confirms that three bodies and one injured person arrived at the Arish General Hospital on the same day, identifying them as the driver and the two soldiers, as well as the injured civilian.

Militants also stopped and searched an ambulance that was transporting a woman and her companions, according to the eyewitness. One of the armed militants warned the driver of transporting members of the military and the police, threatening to kill the driver and the paramedics immediately, the source adds.

The Province of Sinai claimed responsibility for the death of the two Armed Forces conscripts, publishing photos of the checkpoint on one of its affiliated websites last Friday. A number of local news websites published stories on the funerals of two conscripts from Sharqiya on March 17, one of whom matched the national ID card published by the Province of Sinai. 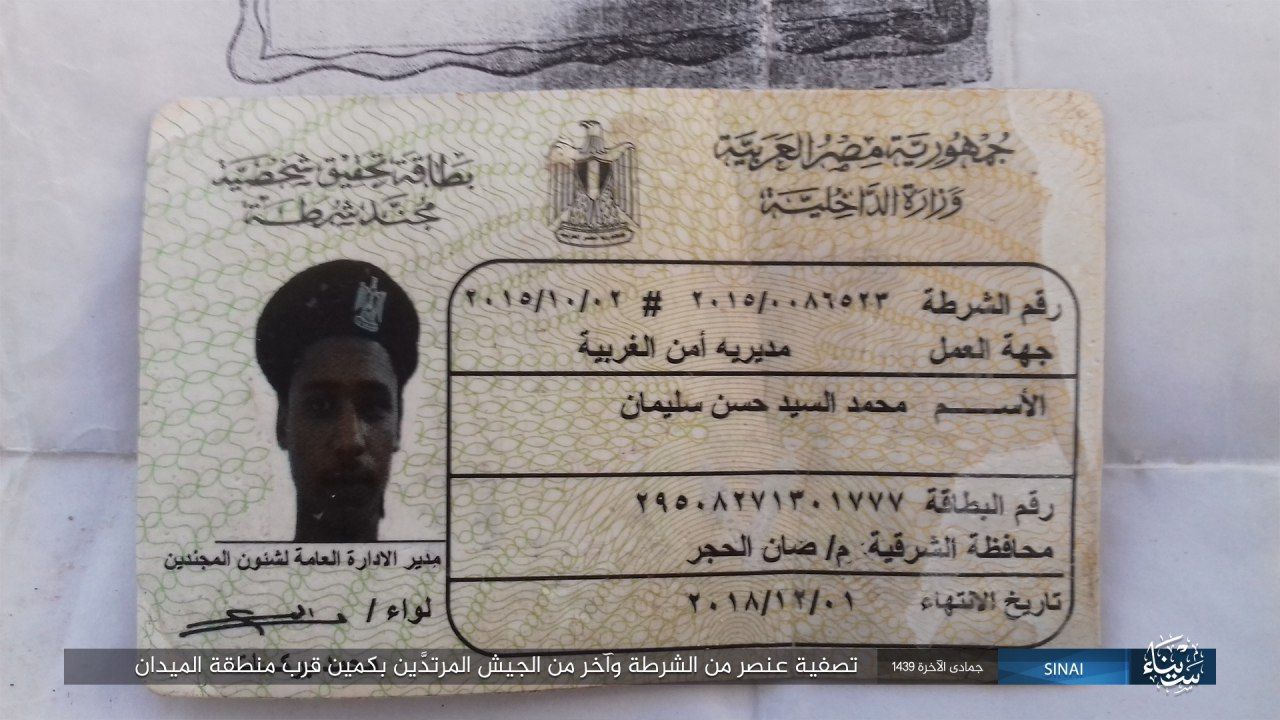 In his statement on Monday, the military spokesperson did not mention any updates regarding the distribution of food by the Armed Forces to North Sinai residents, as he did in his previous statement and the preceding press conference. However, eyewitnesses tell Mada Masr that four people, including a woman, were injured on March 15, after Armed Forces officers discharged live rounds in an attempt to control dozens of residents who had formed a crowd in front of an Armed Forces food outlet in the Saha area of Arish.

According to the eyewitnesses, an Armed Forces car entered the area and stopped inside the Arish Youth Center, where dozens of residents clamored around it trying secure food items before they ran out.

In an effort to bring order to the crowd, the soldiers ushered residents outside the gates of the center. The soldiers then shut the gates and allowed citizens to enter in groups, according to the eyewitnesses. In an attempt to control the crowd, they fired into the air, but the bullets ricocheted off the top of the gate and into the crowd, resulting in four injuries from the shrapnel.

The medical source says that the woman lost her eyesight and three others were injured as a result of the incident.

One of the relatives of the injured woman, who spoke to Mada Masr on condition of anonymity, says that she remained at Arish General Hospital until March 17. The doctors then told the family that they had done all they could and that the wood splinters would settle behind her eye. It is improbable, the doctors said, that she will regain her sight.

According to the relative, the woman’s family wanted to have a specialized doctor from outside North Sinai examine her, but it required preparations be put in place by the governorate’s administration office, which is a strenuous task for civilians. The relative petitioned the governorate and the government to intervene and allow the woman to be transferred by ambulance outside of North Sinai for treatment.

Armed Forces food outlets and vegetable cars have become the only source of food for Arish residents, more than a month into the comprehensive military operation. Since Operation Sinai 2018 began, security forces have limited food items and vegetables from entering the city, creating a situation in which many stores and wholesale merchants were without supplies. The Arish-Qantara International Road has also been completely closed.

Last Friday, March 16, was the final day of a 20-day campaign during which a combined police and military force swept the Fawakhariya neighborhood of Arish, as well as Attalawy and Abu Bakr squares, and what it includes of residential areas in Arish city. The security forces searched residents’ homes and confiscated their mobile phones.

However, Arish residents state that the scale of the demolitions were determined by the location and number of floors of each house. Residents say security forces would demolish houses that could be taken down easily, whereas, if a house was surrounded other buildings or if it was several stories, electronic appliances would be destroyed and the house’s furniture would be thrown from the balconies. Security forces would then destroy its facade with a loader.

Security forces started demolishing the homes of those wanted by security and their families in Arish at the end of 2017, when they demolished six houses of wanted individuals.

The Interior Ministry announced last Thursday the results of its security efforts undertaken in light of Operation Sinai 2018. According to the video report, police forces identified 17,000 houses, 1,931 makeshift informal houses and 768 farms. Where proof of ownership by “terrorists” could be established, the properties were destroyed.

In addition, residents of the Ayoub area of Arish say that authorities have recently begun enforcing new procedures in dealing with the houses of those wanted by security.

A resident of one of the areas currently being targeted by a large security campaign says that security forces burned down a residential building near him.

The resident says that the family, who lived in the three-story house, included one member who is wanted by security forces. The wanted man’s brothers were arrested several times and later let go, according to the resident. When the family learned that the forces conducting the security campaign on the perimeter of the Fawakhariya neighborhood were demolishing and vandalizing the homes of those wanted by security, they moved their furniture and major electronic appliances out of the building, leaving them with relatives. However, they were surprised that security campaign members set fire to the entire building, including what remained of their furniture and electronic appliances.

As Operation Sinai 2018 enters its 40th day, the death toll among militants has reached 157, while 3,177 have been arrested, some of whom released later. Twenty-two Armed Forces officers and conscripts have been killed, and 33 injured, according to the military spokesperson’s comments delivered during the conference held on March 8, and his preceding two statements.