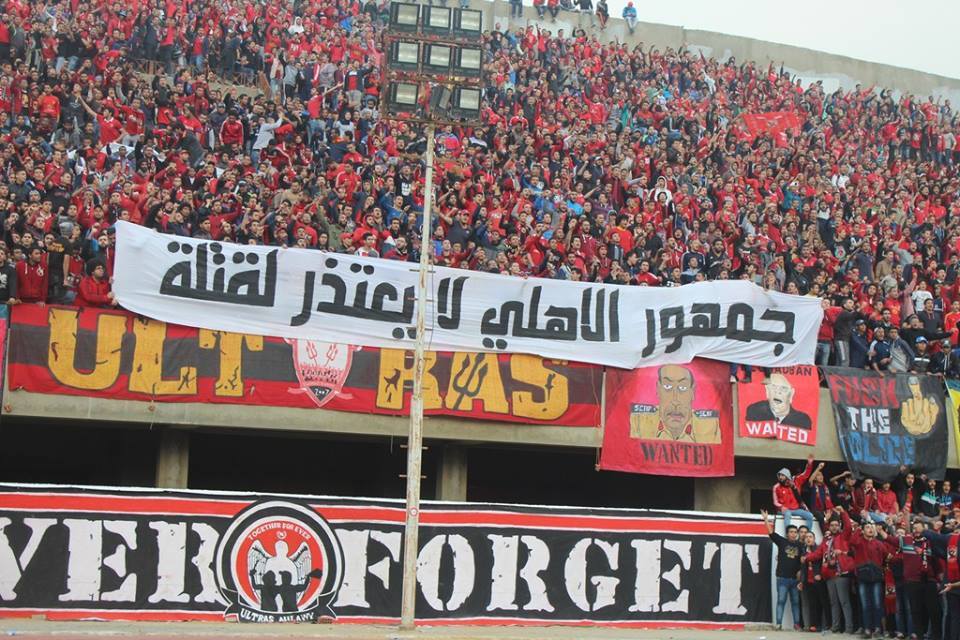 The arrests took place one day after clashes broke out between security forces and Ahly fans during a match between Egypt’s Ahly SC and Gabon’s CF Mounana on Tuesday in Cairo.

According to privately owned Al-Masry Al-Youm newspaper, security forces attempted to arrest several fans after they moved into the upper deck of Cairo Stadium, above the press seats, an area that is closed off to fans. This led to a standoff with security forces inside the stadium, in which fans lit firecrackers, chanted against the police and broke stadium chairs. Altercations escalated following the match, with fans reportedly setting two police vehicles on fire.

The following day, seven “leading figures” of the fanbase — which is known for its tense relationship with the police since the 2011 revolution — were arrested from their residences and workplaces, Hafez told Mada Masr.

Parliament’s Youth and Sports Committee released a statement on Wednesday expressing “deep regrets over the riots committed by the illegal Ultras group,” adding that the cost the stadium LE650,000 in damages. The incident “reveals the truth about these political groups, which is that they are run and funded by forces of evil that are hostile to the state,” the committee added.

The ultras’ official Facebook page released a statement on Wednesday saying that the seven people detained were “only arrested because they are well-known” and that the group has not been able to determine where they are being held.

“After six years of demanding to return to football games, it does not make sense that Ahly fans would be the ones to create a crisis,” the statement said. “On the contrary, the fans are the ones who want to come back. If some irresponsible people participated in this unintentional transgression, we apologize. This situation has nothing to do with Ahly fans.”

Meanwhile, the Ahly club issued a statement saying that it was “keen on ending this match in a manner that reflects the standing of the club and its fans,” adding that the “violations committed by this group undermine attempts by management to assist in the public’s return to football games.”

AD
You Might Have Missed
Carbon Colonies & A Green New Deal
Mugamma revisited: Reimagining the building and the square
If they steal Sheikh Jarrah
Where do old lesbians go to die?
AD