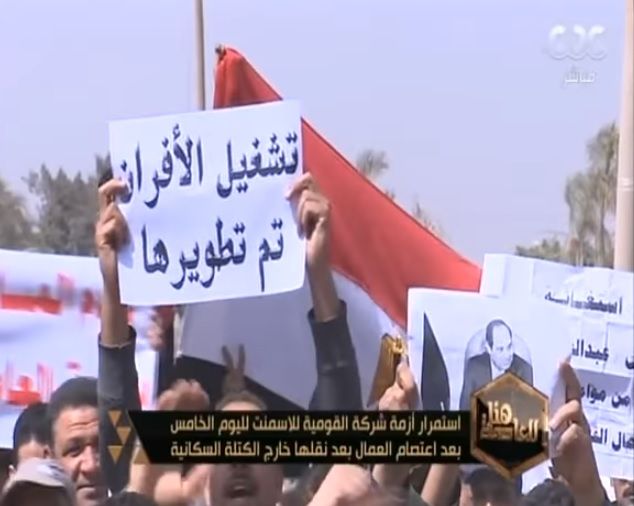 Some 2,300 workers at the National Cement Company (NCC) in Helwan have continued their sit-in for the sixth consecutive day to protest a reduction in their monthly bonuses from 390 percent to 75 percent of their basic wages, according to a striking worker who spoke to Mada Masr on condition of anonymity.

The factory halted production in November 2017 amid significant financial losses that officials within the company have ascribed to ballooning energy costs.

A production engineer, speaking to Mada Masr on condition of anonymity, said that work at the company was halted on November 6 of last year. However, employees were not informed of the reasons or the authority behind this decision.

Abdel Moneim al-Gamal, the head of the General Syndicate for Construction and Timber Workers, attributed the losses and production halt to corruption within the NCC, however. He stated on Sunday that the syndicate has given the company 10 days to investigate corruption allegations, before filing an official complaint with the prosecution.

The worker told Mada Masr that the company, which is a subsidiary of the Holding Company for Chemical Industries, issued a decision to reduce workers’ bonuses to 75 percent of their wages on February 27, effective immediately. The reduction in monthly bonuses will be temporarily supplemented by cash payouts equivalent to 225 percent of their base salary, and which will be paid out from March to May of this year.

Workers have also been offered an early retirement plan, the details of which are still being formulated, according to a copy of the company’s decision published in the privately owned Youm7 newspaper on March 1.

The salary reduction and early retirement offer are not in line with workers’ rights, the worker stated.

Workers previously took home a 20 percent additional payment for working extra shifts, as well as their monthly bonus of 390 percent, meaning that they would receive 410 percent of their basic wages in additional payments. A second worker who spoke to Mada Masr on condition of anonymity, and whose base monthly salary is LE1,500, noted that his cumulative take home salary before the reduction would have been LE6,150. With the current cuts and the temporary cash payouts that will run through May 2018, he will now take home LE4,500. Beginning in June, however, that figure will drop to LE2,625.

“The workers are claiming that they have not received their wages, which is not true — the wages have been made available in their bank accounts. They are refusing to collect their wages in protest of corrections to the company’s bonus policies,” Mohamed Radwan, the NCC chairperson, told Lamis al-Hadidy on a Sunday broadcast of her program “Hona al-Asema” (Here’s the Capital).

According to one of the workers who spoke to Mada Masr, the plant’s kilns were shut down due to the rise in gas prices, which followed the liberalization of Egypt’s exchange rate in November 2016, and the company’s ongoing negotiations to secure alternative energy sources — potentially including a switch to coal. However, he added that the company’s management provided workers with little information on the nature of these negotiations.

During his Sunday appearance on Hadidy’s show, Radwan also attributed the company’s financial losses to its use of natural gas to power its furnaces.

“This company is the only company that uses natural gas as fuel. All other companies have moved to alternative sources of fuel and are using coal and refuse-derived fuel. The National Cement Company cannot make a profit using natural gas,” Radwan said.

In early February, Minister of Public Enterprise Khaled Badawy stated that a feasibility study would be conducted to review plans to reduce the company’s losses, which would include relocating the factory from its current place in a residential district in Helwan to a more remote area, a move that would facilitate the company’s compliance with environmental regulations.

The company chairperson provided further details on the proposed move on Sunday night.

“When there are companies and factories in residential districts, [environmental] regulations are more stringent,” noted Radwan, adding that the Environment Ministry has claimed that the company is not in compliance with the requisite regulations.

“[The ministry] does not want to give [the company] the license to use an alternative fuel source — coal, in this case — until after the ministry’s standards are implemented, which is difficult and costly,” explained the chairperson. As such, the NCC’s board of directors and the holding company have decided to move the company from its current residential location, “so that the company can switch to a cheaper fuel source that allows it to make a profit and decrease pollution in a residential district,” Radwan stated.

The production engineer who spoke to Mada Masr refuted Radwan’s Sunday claims, however, noting that the company already complies with the Environment Ministry’s regulations.

In terms of the company’s finances, Badawy has ordered an urgent investigation into perceived irregularities in the NCC’s financial records, according to a Central Auditing Authority (CAA) report.

The report comes on the heels of the company reporting LE240 million in losses for the first quarter of the current fiscal year, compared to LE4.4 million in losses during the same period last year. The company’s losses are an outlier when set against the profits posted by other companies in the cement sector.

Gamal stated that the company is plagued by corruption, which must be investigated.

The company was posting profits until 2013, according to Gamal, at which point management decided to allocate funds for technical development work, which was expected to cost LE400 million. This figure rose to LE1.2 billion, however, and the development work took two years, lasting from 2014 to 2016, instead of the initially planned eight months. Technical errors led to a 45 percent increase in the use of natural gas.

The General Syndicate for Construction and Timber Workers notified the company that it will submit a complaint to the public prosecutor’s office next Sunday, March 11, if the company does not investigate the corruption allegations, according to Gamal.

“Officials, not workers, are the reason for these losses,” he said. “And we demand their punishment.”