Amid allegations of sexual misconduct, Khaled Ali resigns from party and ECESR
By
Mada Masr 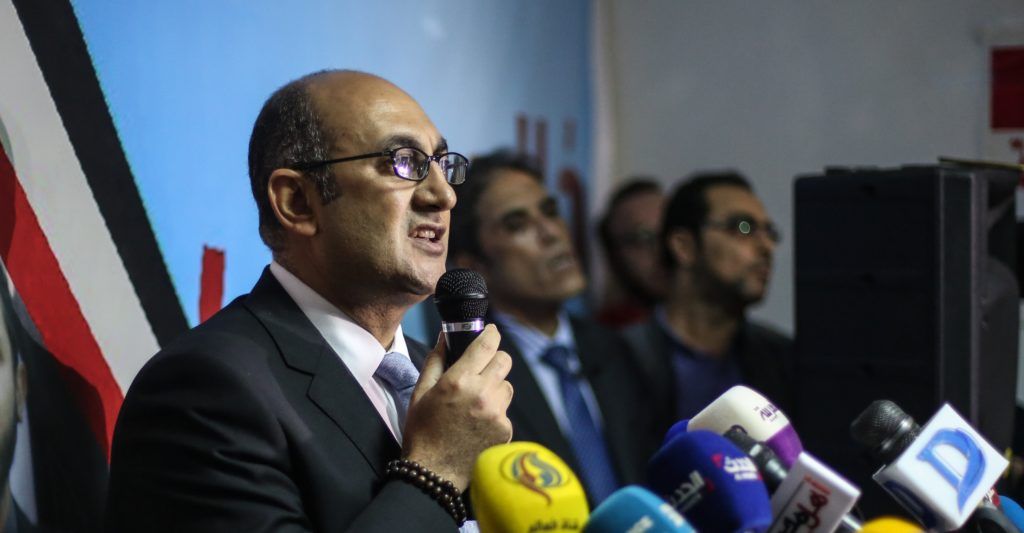 Lawyer and former presidential candidate Khaled Ali announced his formal resignation from the Bread and Freedom Party, and from his position as a lawyer for the Egyptian Center for Economic and Social Rights (ECESR), on Monday, following accusations of sexual misconduct.

Ali’s resignation from the party he formerly headed comes after an anonymous woman sent an email in October of last year to a number of activists and civil society workers outlining the allegations and details of the incident, which took place in 2015, and accusing another party member of rape in 2014.

In the email, of which Mada Masr obtained a copy, the woman, a former employee at ECESR, accuses Ali of attempting to initiate a sexual relationship with her in his downtown Cairo office. She alleges that the lawyer requested to meet her and steered the conversation toward her personal and sexual relationships, before asking her to spend the night with him, an incident she describes in the email as “one of the most disgusting experiences [of] my life.”

Ali denied the allegations in his resignation announcement, and he did not specify his reasons for leaving the Bread and Freedom Party and the ECESR. He called on the public to support both institutions “in light of the numerous scenarios designed to undermine them by state bodies.”

Although he did not relate his resignation to the accusations, the former party head apologized to the woman, stating that “just her thinking about me in this way and her writing an email of this nature means that I must offer an apology for the pain she experienced. Regardless of the results of the investigation, I bear part of the responsibility, which has prompted me to offer this apology.”

Ali also apologized to “all of the women I have dealt with in my professional, political and public career because my name has been brought up in a way that I do not accept of myself.”

The recently withdrawn presidential candidate said that he requested that “an investigation be opened into the incident and that the necessary measures be taken.”

The woman’s email also included accusations against lawyer Mahmoud Belal, a fellow employee at ECESR at the time and a former Bread and Freedom Party member, who she claimed raped her while she was under the influence of alcohol in 2014.

The Bread and Freedom Party asserted in a Saturday statement that an independent investigation into both incidents by a committee comprised of two women and a man had been opened in December, and that it cleared Ali of any charges of sexual misconduct. In his resignation announcement, Ali described the committee members, who he did not name, as “independent parties known for their integrity and support for human and women’s rights,” noting that they contributed “feminist, medical and legal expertise” to the investigation.

In its statement, the Bread and Freedom Party did not explicitly state the nature of Belal’s accusations, but referred to his behavior as “disgraceful.” It recommended that a number of sanctions to be taken against Belal, but added that he had resigned from the party when the accusations were initially leveled against him.

The party further recommended that Ali “be guarded about not mixing his public life and his personal one, in order to safeguard his reputation and avoid creating room for misunderstanding and suspicion.”

The independent investigative committee got in touch with the woman who made the accusations asking for her testimony, but, according to the party, she refused to meet with them for personal reasons, and many of the witnesses contacted also refused to provide testimony.

A number of activists refuted this claim in a statement circulated on Monday, however, asserting that the woman in question was willing to meet with the committee to discuss points concerning the methodology of the investigation.

Additionally, she asked the committee a number of questions to verify impartiality of the investigation, including the names of those who nominated the commission of inquiry, its investigative mechanisms and whether it will announce its methodology and results, and requested the nomination of one or two people to join the committee. However, according to the statement, “the representative of the committee [refused] to answer these questions and responded by saying that it may consider them if [she] agrees to participate in the investigation.”

Belal’s lawyer Sameh Samir commented on the accusations of rape levelled against his client, telling Mada Masr that the investigative committee’s report concluded that, “According to the testimony of an expert, it was not possible to determine whether the plaintiff was still in a state of confusion or was still under the influence of alcohol after arriving at the defendant’s house, so we cannot determine whether or not the plaintiff was unable to consent at the time.”

In light of the investigative committee’s findings, Samir expressed surprise at the party’s statement, which accused Belal of “disgraceful behavior,” stating that he didn’t know what this term referred to. Accusing the party of “giving into political blackmail” in its statement, Samir added that if the their reference to Belal’s “disgraceful”behavior insinuated rape, then this would contradict the investigative committee’s findings.