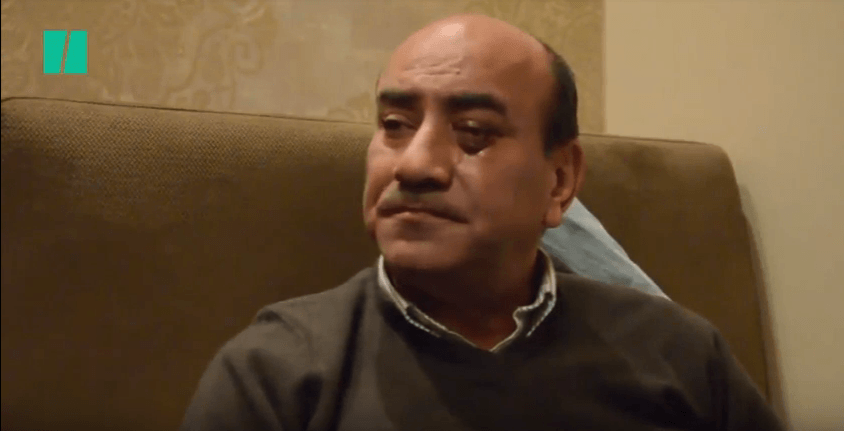 The journalist who conducted an interview with former head of the Central Auditing Authority (CAA) Hesham Geneina, in which the latter discussed documents regarding post-2011 violence, was arrested on Friday according to lawyer Ezzat Ghoneim.

Journalist Moataz Wadnan was arrested along with three of his relatives while visiting family in the Upper Egypt governorate of Sohag, Ghoneim told Mada Masr.

Police arrested the four family members from a microbus, with the driver later notifying Wadnan’s family of the incident.

Wadnan’s relatives were released on Saturday morning, but he remains held in custody by the Fifth Settlement Police Station and has yet to be presented to a prosecutor for questioning.

Amr Badr, board member in the Journalists Syndicate, told Mada Masr that he had been in contact with Wadnan since the interview was published on February 11, out of concern for the journalist’s safety.

“We will support Wadnan under any circumstances. At least four members of the board will do so,” said Badr who stressed that he will push for the syndicate’s lawyer to be present during Wadnan’s interrogation.

During Geneina’s interview with Wadnan, which was published on February 11, Geneina claimed that former Armed Forces Chief of Staff Sami Anan had documents stored outside of Egypt that concerned a number of violent incidents in the aftermath of the 2011 revolution, a period during which the Supreme Council of the Armed Forces (SCAF) was the acting governing body. Geneina’s claims were later refuted by Anan.

The controversial interview prompted Armed Forces spokesperson Tamer al-Rifai to issue a statement on February 12, condemning Geneina’s remarks. “We will use all constitutional and legal rights in protection of national security and to maintain the army’s honor,” declared Rifai.

Military prosecution issued a 15-day detention order for Geneina on February 13, pending investigations into a complaint filed against him by the general military prosecutor concerning his comments during the February 11 interview with Wadnan, who is also a reporter for the Ahl Masr online newspaper and the deputy editor-in-chief of the Baladna al-Youm online newspaper.

Geneina, who was a member of Anan’s now suspended presidential campaign, also faces another complaint filed by Anan himself, which accuses Geneina of libel and defamation, as well as a distortion of the former Armed Forces chief’s military history, according to Geneina’s lawyer Ali Taha.

In a statement published on Friday on Geneina’s daughter Shorouk’s Facebook page, the former CAA head’s defense team asserted that they had evidence to prove Geneina has been suffering from Post Traumatic Stress Disorder (PTSD) since his January 27 assault, when Geneina was attacked in his car by three individuals, sustaining injuries to his eye and leg.  He has accused state institutions of planning the attack on several occasions, claims he reiterated during his interview with Wadnan.

Geneina’s defense team therefore concluded that any statements issued by Geneina since his assault “do not reflect his conscious will,” due to his PTSD.

Although Shorouk Geneina confirmed that the Friday statement was written with the consultation of several physicians both inside and outside of Egypt who confirmed her father’s PTSD diagnosis, Taha says that Geneina has not seen the statement himself.

On his Facebook page, Taha asserted that Geneina is “the most sane” person he has ever met and that the claims made by his client during the HuffPost Arabi interview are not legally incriminating.