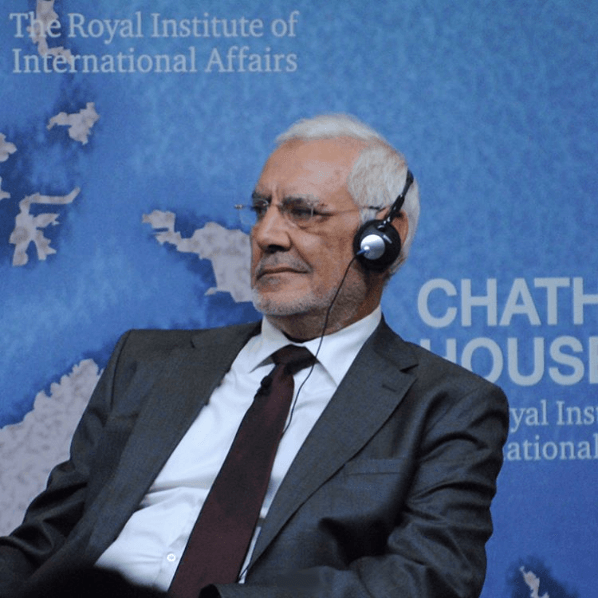 Abdel Moneim Abouel Fotouh, a 2012 presidential candidate and Islamist political figure, was remanded in detention on Thursday, prompting the Strong Egypt Party he heads to announce a temporary suspension of its operations.

He will remain in pretrial detention for 15 days while the State Security Prosecution investigates him on charges of leading a terrorist group and disseminating false news inside the country and abroad with the purpose of damaging the country’s interests, lawyer and withdrawn presidential candidate Khaled Ali told Mada Masr.

The Strong Egypt party head, who was formerly a leading Muslim Brotherhood figure but left the group in 2011, has denied all charges and requested that the prosecution move him to a hospital, according to Ali, who attended the interrogation.

Abouel Fotouh was arrested from his home in New Cairo on Wednesday evening alongside members of the party’s political bureau, who were subsequently released. His arrest came days after Al Jazeera aired an interview in which he criticized President Abdel Fatah al-Sisi.

The Interior Ministry announced on Thursday evening that it had obtained the warrant for Abouel Fotouh’s arrest from the State Security Prosecution after the National Security Agency (NSA) turned up evidence that he met with members of the International Organization of the Muslim Brotherhood, who arranged the interview with the Qatari news outlet.

According to the ministry statement, NSA investigations showed that Abouel Fotouh met with international Brotherhood members both abroad and in Egypt on several occasions with the intention of staging a plan to “disturb the country’s stability” and “inflate current crises,” and copies of his “assignments” were found when police personnel arrested him.

In the wake of the arrest and detention of its head, the Strong Egypt Party announced its general assembly would convene and that it holds the state responsible for Abouel Fotouh’s wellbeing. It called upon political figures to stand against what it called “the arbitrary practices of the regime in the face of peaceful opponents.”

Ali told Mada Masr that Abouel Fotouh’s defense team responded to the accusation that he heads a terrorist group by asserting that he renounced membership in the outlawed Muslim Brotherhood group, in which he previously held a position on the Guidance Bureau.

Lawyers added that the Strong Egypt Party stood in opposition to the Muslim Brotherhood on several occasions, such as in 2012, when the party challenged 2012 constitutional amendments proposed by the Brotherhood, and in 2013, when it supported calls to protest former President Mohamed Morsi.

The defense team also submitted a request to view the reports documenting the accusations leveled against the former presidential candidate, but the prosecution rejected the request on the grounds that other defendants are named.

The Civil Democratic Movement (CDM), a recently formed alliance of political parties that has called for a boycott of the election, issued a statement on Thursday afternoon calling Abouel Fotouh’s arrest a step toward “a wide clash that would affect all political parties and movements, leaving no opponent outside of prison.”

Shortly before his arrest, Abouel Fotouh visited London to conduct several interviews, including one with Al Jazeera in which he criticized Sisi’s government and the electoral process, in particular the arrest of presidential contender and former Armed Forces Chief of Staff Sami Anan and the attack on the former head of Central Auditing Authority Hesham Geneina.

He told Al Jazeera in the interview, aired on February 11, that he believes Sisi personally orchestrated Anan’s exclusion from the presidential race, rather than the Armed Forces.

The Strong Egypt Party head also criticized Sisi’s mode of governance. “Either I rule you, or I kill you.” Abouel Fotouh added that he believes Sisi has no experience in governing a state, calling his first term in office “a failure not befitting Egypt.”

He emphasized that he believes the current president can only be replaced through peaceful political action and fair elections. “Ousting [Sisi] through chaos is dangerous for the nation, and I won’t be happy if the Armed Forces stages a coup,” he told Al Jazeera.

During his London visit, Abouel Fotouh, who garnered approximately 18 percent of the vote during the 2012 presidential election, reiterated these views in a Wednesday interview with the privately owned Al-Araby TV.

“Democracy has vanished, and what Sisi is doing is much more severe than what his predecessors Hosni Mubarak and Gamal Abdel Nasser did. The Sisi regime created terrorism when they increased political repression and shot at protesters.”

Abouel Fotouh was among the slew of political figures who signed a statement issued on January 28, calling on Egyptians to boycott the election and reject its results several days before the CDM issued its own call for a boycott.

On January 31, during the inauguration of the Zohr gas field, Sisi delivered an improvised address in which he said he would not allow for a repeat of the events of January 2011. “I am not a politician,” he said, “but if things continue in this way, and if people think they can undermine Egypt’s security, there will be further measures.”

Rex Tillerson, the United States Secretary of state, recently called for Egypt to hold free and fair elections during his first official visit to Cairo on Tuesday, one day before Abouel Fotouh’s arrest.

The Thursday detention order is the most recent incident in a crackdown on political figures in recent weeks. On February 8, police arrested deputy head of the Strong Egypt Party Mohamed al-Qassas who was subsequently charged with joining and financing an outlawed group.

The military prosecution also issued detention orders for Geneina after he told HuffPost Arabi that detained former military chief Anan possessed documents that “reveal the third party that is responsible for a lot of political crimes in Egypt that followed the January 25 revolution.”

Anan has been in military detention since he was arrested on January 23, after he announced his intention to run in Egypt’s election.