Graph | Despite record highs, a third of Egyptian foreign reserves are debts due within a year

Egypt’s foreign currency reserves rose over the last year to reach a record high of US$38.2 billion at the end of January, but a significant portion of the reserve was built through short-term external borrowing, which must consequently be paid within the coming year. 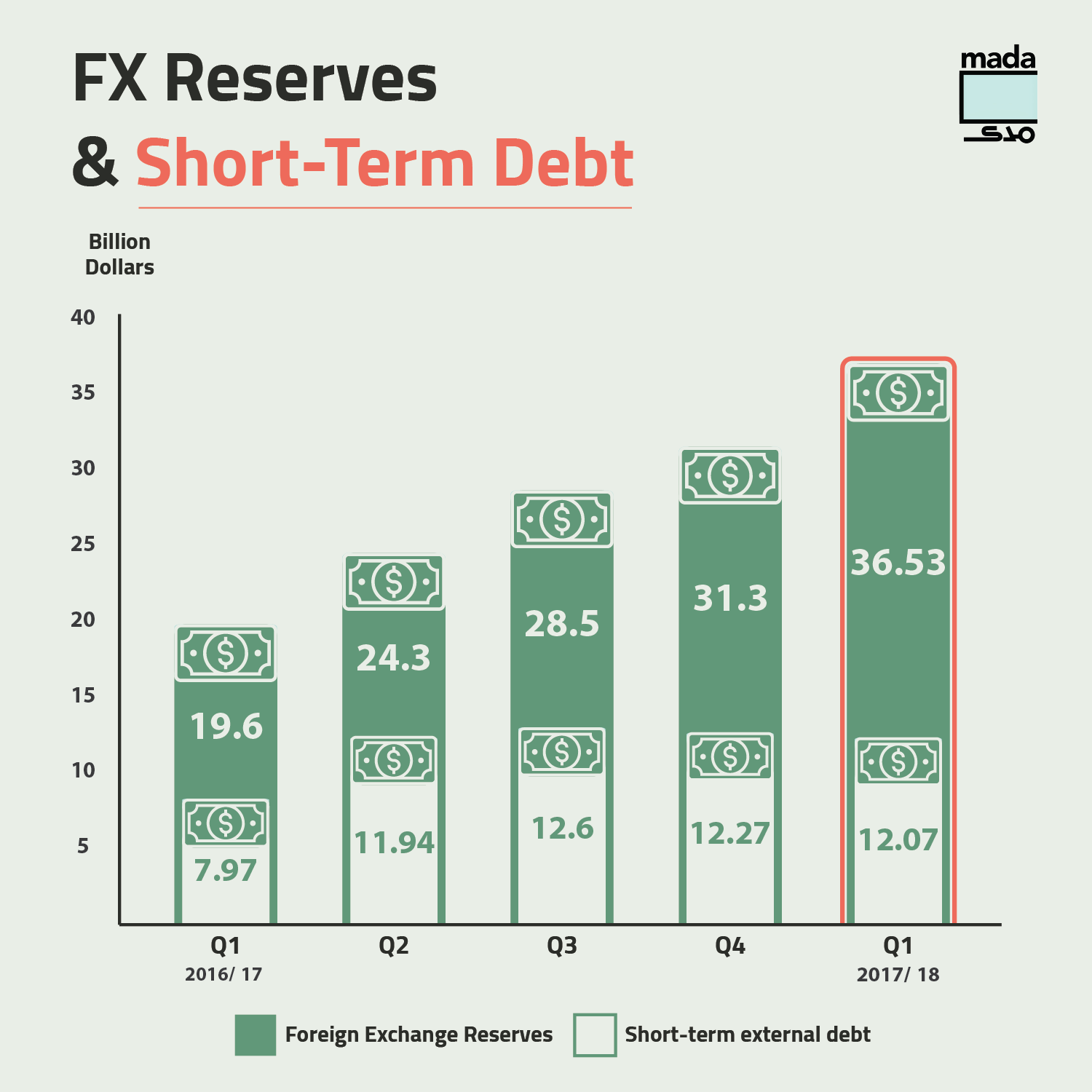 The Central Bank of Egypt’s (CBE) most recent monthly bulletin, published last week, showed that the proportion of short-term external debt was 33 percent of the country’s foreign currency reserves in September 2017, the last available statistic in the bulletin.

Although external short-term debt — debt that has a maturity of one year or less, according to the CBE — didn’t exceed 10 percent of foreign reserves in the 10 years between 2000 and 2010, and doubled in 2012, it jumped to about half of the total reserves in 2013, and fluctuated thereafter, remaining above the 30 percent mark since 2016.

The proportion of debt to foreign reserves reflects the ease with which it can be repaid by the Egyptian government, says Salma Hussein, an economic researcher at the Egyptian Initiative for Personal Rights.

Hussein explains that the smaller the ratio of short-term foreign debt to foreign reserves, the better the terms of foreign debt repayment, as it would have a longer maturity period and hence be allocated more time for repayment, which eases pressure on the reserves.

Noaman Khaled, a macro economics analyst at CI Capital, tells Mada Masr that the poor availability of foreign currency over the last few years has forced the government to borrow in order to make up for the shortage.

While Hussein concedes that there was no room for maneuver to avoid seeking short-term debt, she believes there were potential economic decisions that the government didn’t take, which could have made this step an option and not a necessity. These include a managed floatation of the pound, instead of fully liberalizing the foreign exchange regime, which led to the pound halving in value after the decision in November 2016, greatly increasing government bills valued in foreign currency. 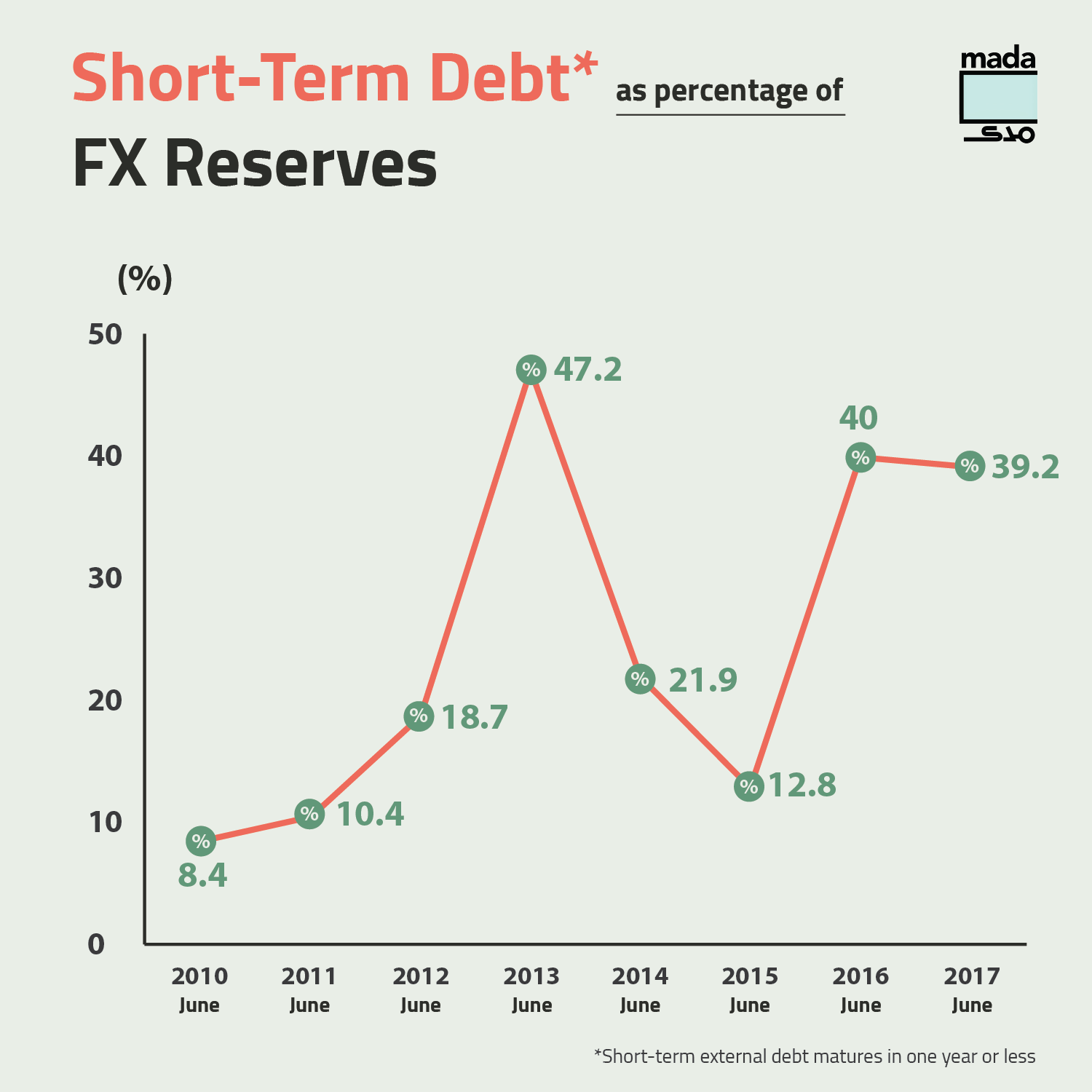 Both economists agree that too much short-term foreign debt placed the economy in a precarious situation in case of any shocks that might impact the government’s ability to renew its debts or take new ones.

Khaled stresses that if any international circumstances prohibit or increase the reluctance of creditors to lend to the Egyptian government, making the state unable to renew its debts, it would have to pay a third of its currency reserves to repay them in a short amount of time.

“Egypt is highly dependent on its reputation in lending institutions, such as the International Monetary Fund or World Bank, and others, and if one of them says the smallest thing about Egypt not being able to pay part of its debt, the government will find itself in a rut,” Hussein says.

Khaled, however, maintains that decreasing yields in the international debt market will probably lead Egypt to restructure its debt to depend more fundamentally on medium and long-term borrowing, while Hussein’s opinion is that Egypt must sit down with its current creditors, which are mainly comprised of Gulf states, the Paris Club and international organizations, and restructure its short-term debt to pay over a longer period of time.

AD
You Might Have Missed
Carbon Colonies & A Green New Deal
What we talk about when we talk about trees
Mugamma revisited: Reimagining the building and the square
Where do old lesbians go to die?
AD
Osman El Sharnoubi
31 articles on Mada

Topics
Related
Economy op-eds
Do economic indicators reflect reality for most Egyptians?
Michel Assaad | Growth amid inequality and corruption only ever benefits a limited number of people
IMF loan
Can dependence on ‘hot money’ boost the economy amid risks of social tensions?
Waad Ahmed | Find out whether the influx of over US$17 billion in investments augurs prosperity or crisis
IMF
Where does government stand in implementing terms of IMF loan agreement?
Osman El Sharnoubi | Mada Masr tracks Egypt's compliance with terms of IMF staff report timetable as the fund conducts review
Economy op-eds
The IMF as knee surgeon on a cancerous patient
Amr Adly | "You ask me about the poor and their problems? These are issues that need creative solutions"