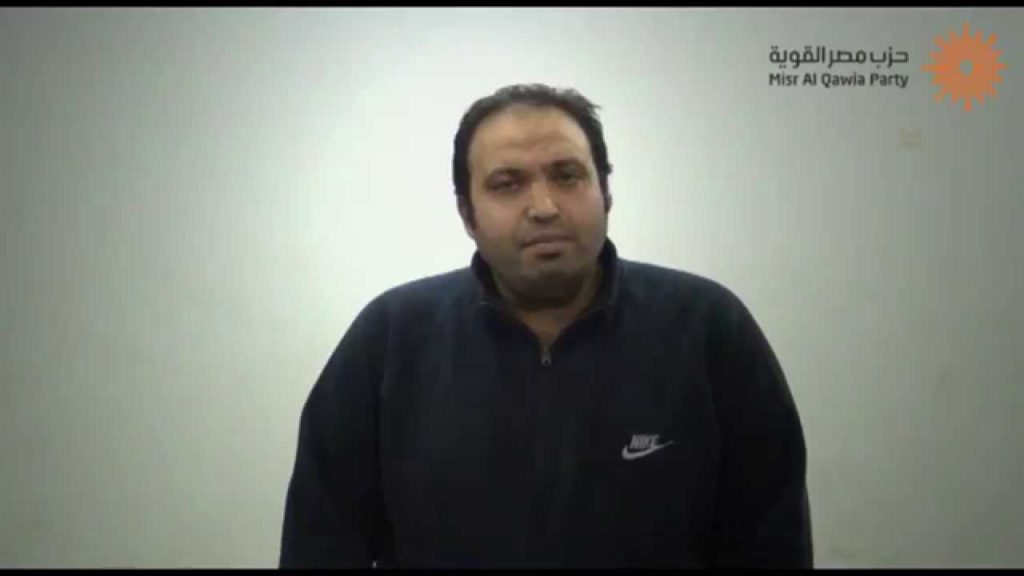 Qassas was arrested shortly after he left a wedding at the Police Mosque near Cairo’s Azhar neighborhood on Thursday evening. Qassas’ neighbors reported that security forces also raided his residence in his absence.

Qassas’ first round of interrogations took place on Friday in the absence of lawyers, because neither the party nor his family were informed of any details regarding his detention or whereabouts, Mohamed Osman, member of the Strong Egypt Party political bureau, told Mada Masr on Saturday morning.

Qassas’ wife, Iman al-Badiny, confirmed in a statement on her Facebook account on Saturday that his family were not notified of interrogations that took place on Friday night.

Badiny learned about the Thursday raid on their residence from their neighbors, she told Mada Masr on Saturday. Badiny was prevented from entering their home next morning by police forces. Officers at the nearest police station also refused her requests to file a police report regarding the raid on her residence and the forced disappearance of her husband.

Lawyer Hanish is currently attending the second round of interrogations.

Qassas’ charges include joining the Muslim Brotherhood, an organization outlawed in Egypt, and “disseminating false news.” His is part of a larger case (977/2017) that includes several activists, bloggers and journalists. Most prominent among the defendants are blogger Islam al-Rifai, more popularly known as Khorm, photojournalists Ahmed al-Sakhawy and Ahmed Abdel Wahab Mohamed Ali, as well as journalists Ahmed Abdel Aziz and Hossam al-Soueify.

Late last month, Strong Egypt Party President Abdel Moneim Abouel Fotouh had signed — in his personal capacity as a former 2014 political candidate — a statement by several political parties and politicians calling for the boycott of the upcoming presidential elections, set to take place in March. Party member Osman told Mada Masr at the time that Strong Egypt Party members are in favor of joining initiatives calling for a boycott.

Several parties and activists issued a joint statement on Saturday condemning Qassas’ arrest, referring to the incident as “illegal.” The statement, which is also signed by former presidential candidate Khaled Ali, claimed that Qassas was “kidnapped” and his personal belongings “illegally seized.”

Before Qassas’ whereabouts became known, rights organization Amnesty International released a statement on Friday in which its North Africa Campaigns Director, Najia Bounaim, called Qassas’ arrest and disappearance “a brazen attack on the rights to freedom of expression and association in Egypt.”