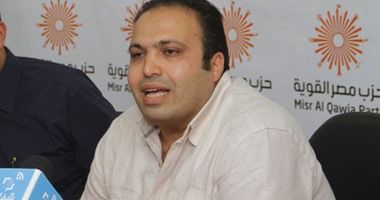 The Strong Egypt Party condemned the arrest of the party’s deputy president, Mohamed al-Qassas, in a statement issued on Friday, demanding authorities reveal his whereabouts.

Mohamed Osman, a member of the party’s political bureau, told Mada Masr that Qassas attended a wedding at the Police Mosque near Cairo’s Azhar neighborhood on Thursday and was arrested shortly after he left the event, according to witnesses.

No information has been released regarding who carried out the arrest or the location in which Qassas is being held, Osman said, adding that Qassas’ neighbors had reported that security forces also raided his residence in his absence.

The party’s statement argued that authorities had no right to arrest Qassas and raid his home. “The government and the minister of interior bear full responsibility for the safety of Qassas,” it read, demanding the public prosecutor immediately reveal the identity of the arresting party and the whereabouts of Qassas’ detention.

Strong Egypt Party President Abdel Moneim Abouel Fotouh had signed, in his personal capacity as former presidential candidate, a statement issued last month by a number of opposition figures in which they called for the halt of presidential elections, slated for March.

Osman had told Mada Masr previously that party members are in favor of joining initiatives calling for a boycott.

The Civil Democratic Movement, an alliance of opposition parties, also called for a boycott of the upcoming election, saying the electoral process lacks guarantees and insisting it “has turned into a total deprivation of the Egyptian people’s right to choose a president.”

Rights organization Amnesty International issued a statement on Friday decrying Qassas’ arrest. “This enforced disappearance of a senior member from a prominent opposition party is a brazen attack on the rights to freedom of expression and association in Egypt,” the statement said. “Enforced disappearance has become a routine practice by the Sisi administration to silence activists and opposition groups.”

Meanwhile, 6th of October City Prosecution renewed the detention of Wasat Party Secretary General Mohamed Abdel Latif Talaat for 15 days on charges of “inciting chaos,” according to the Egyptian Coordination for Rights and Freedoms (ECRF).

The ECRF said Talaat was arrested from his home in the Sheikh Zayed district of 6th of October City on the outskirts of Cairo on January 22.