The Accelerated Mobile Pages (AMP) Project, an open source website publishing tool led by Google, was blocked in Egypt on February 2, Mada Masr was able to confirm through independent testing. Mada Masr has been using the AMP Project as an alternative platform to its main website, access to which has been blocked inside Egypt since May 24, 2017.

While Mada Masr can confirm that regional members of Google’s staff are aware of the block, the company has yet to issue an official statement on the move.

The rationale behind blocking the AMP Project, and the party responsible for the decision, remain unknown. However, at least 496 platforms, including news websites, blogs, proxy and virtual private network (VPN) service providers, have been blocked on Egyptian service providers since May 24, 2017, according to monitoring conducted by the Association of Freedom of Thought and Expression (AFTE).

The block of the AMP Project does not only limit access to individual websites, proxies, or VPNs, in part due to the way in which the service functions.

“AMP aims to speed up the delivery of content on mobile devices through generating mobile optimized code out of the original website or content. One of the most significant components of the AMP project is its content delivery network (CDN),” said Mohamed Tita, a systems administrator at the Cairo-based Motoon. “CDNs were introduced first as a result of the latency issue on the internet. It’s simply servers all around the world serving one purpose: to keep a cached version of all kinds of content, to deliver it to specific regions. So with the AMP Project, when you request content which is hosted in London, for example, and you are in Egypt, the content doesn’t have to travel all that distance to reach you. You just fetch its cached frequently updated version from the CDN nearest to you.”

The AMP Project’s CDNs have become an increasingly prominent feature of the internet. In an October blog post, David Besbris, the vice president of Google Search and the AMP Project lead at Google, estimated that over 25 million website domains have used the publishing tool to publish more than 4 billion AMP pages. Google’s backing means that AMP pages are also integrated into its web search engine, with Google rerouting certain search requests through AMP servers, rather than through its regular servers.

In addition to Besbris’ general estimate of AMP’s reach and the fact that several large newspapers like the Washington Post use the publishing tool, Egyptian news publications may also be affected by the block. A Google search conducted on Sunday shows that users on Egyptian internet service providers may face difficulties in accessing certain pages from the privately owned Youm7 newspaper and the privately owned Masrawy news website. 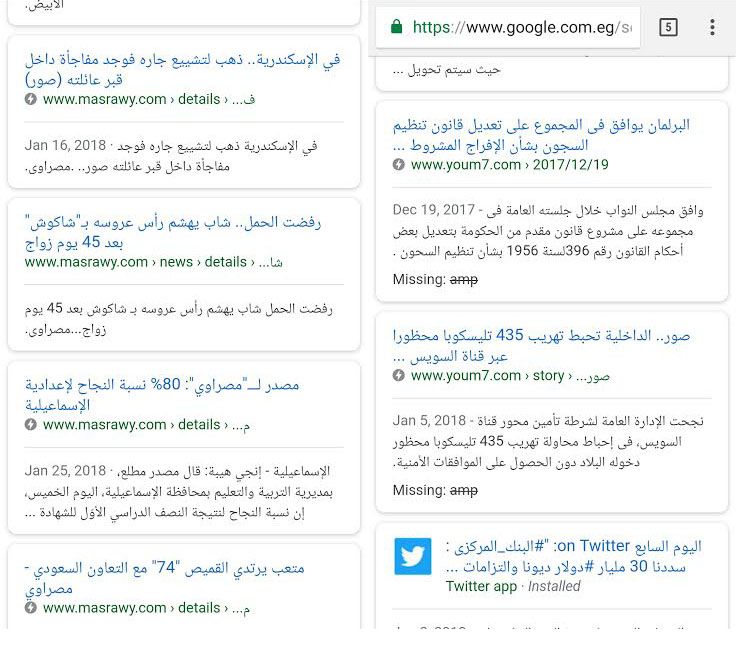 The AMP thunderbolt logo next to the url indicates that the page will automatically open as an AMP Page.

While users can still access canonical web pages, some users are reporting difficulty in accessing sites that Google reroutes to AMP pages.

The AMP block may also extend beyond access to information, as Google seems to be positioning the service as a way to extend its sizeable share of the online advertising market.

In a November 2017 study that was commissioned by Google, Forrester Consulting Total Economic Impact recorded that four companies using AMP garnered US$328,625 in profit growth over three years due to a 10-percent year-over-year growth in traffic. In the same timespan, Forrester Consulting Total Economic Impact found that the companies took in $676,822 from a 20 percent sales conversion rate.

Referencing Forrester and other studies, Besbris was enthusiastic about the potential of advertisement revenue for the AMP Project in his October blog post. “We’re excited to see this trend continue to grow as the AMP Project makes additional investments in bringing the speed of AMP to building and serving ads on the web,” he wrote.

According to its earnings report posted on February 1, Alphabet, Google’s parent company, stated that it had generated US$27.2 million in the last three months of 2017.

It is unclear what the extent of the effect of this block will be on advertisement revenue in Egypt.

Access to Mada Masr and 20 other websites was blocked in Egypt on May 24. The state-owned Middle East News Agency quoted “a senior security source” saying that the blocked websites “publish content that supports terrorism and extremism and intentionally propagate lies.”

Access to the website of the New York-based organization Human Rights Watch was barred on September 7, one day after the international rights organization published a report on torture in Egypt.

No authority has claimed responsibility for the decision, and its legal basis has not been disclosed, despite complaints filed by the Journalists Syndicate on behalf of several of the websites that had been blocked with the Supreme Media Regulatory Council, the telecommunications minister and the National Telecom Regulatory Authority (NTRA).

Mada Masr filed a lawsuit with the State Council on June 6 against the NTRA, alleging that the authority had failed to follow the proper administrative procedures after Mada Masr filed a complaint requesting that the body investigate who was responsible for the decision to block access to the company’s website on May 24. In November 2017, Hassan al-Azhary, a lawyer at AFTE who is representing Mada Masr, requested that the court add the president of Egypt, the defense minister, deputy head of the General Intelligence Service, the interior minister and head of the Supreme Media Regulatory Council as respondents in the case.

Topics
Related
freedom of the press
Mada Masr’s blocked website case adjourned to petition new state authorities
Court adjourns investigations into Mada Masr's lawsuit against the blocking of its website, to inform
website blocks
Website blocks extend to rights organization website and journalist’s blog, bringing total to 133
Access to ANHRI and a journalist's personal blog was blocked on Sunday
website blocks
Egyptian government bypasses ISPs to block access to websites: Telecommunications Ministry source
Mohamed Hamama | The websites block has been carried out through a centralized government decision, according to source
internet surveillance
24 hours later: What we know about the blocking of Mada Masr’s website
Mohamed Hamama | Where and how we're blocked, whether it could be legal, what the context is, and more