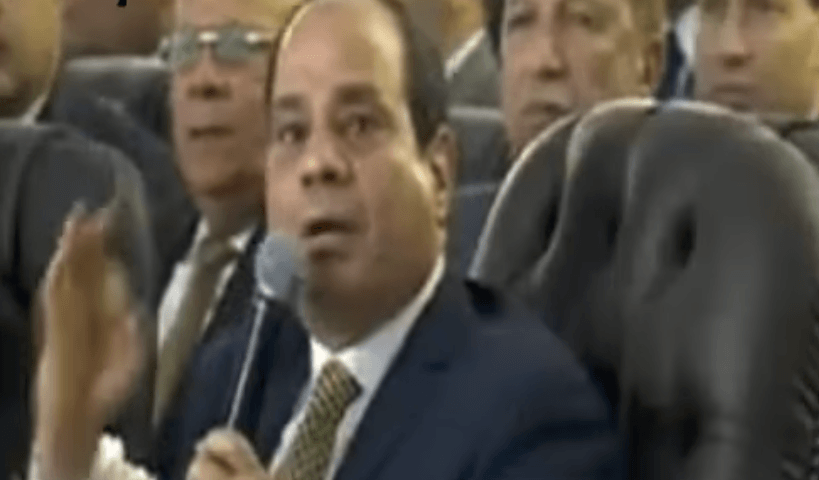 The Civil Democratic Movement, an alliance of seven political parties and 150 individuals, which has been calling for the halting of the upcoming presidential elections due to security interference and the elimination of competition, expressed concern over President Abdel Fattah al-Sisi’s menacing response.

The alliance released a statement on Friday following an angry address Sisi delivered on Wednesday when inaugurating the Zohr gas field operations. They demanded that the president clarify what he meant by several inflammatory statements that seemed aimed at his political opposition.

“Beware,” Sisi warned, “What happened seven to eight years ago will never happen again in Egypt. You won’t do now what you failed to do then. It seems that you don’t really know me.”

The alliance asked Sisi if he was referring to the January 25, 2011 revolution in their statement, titled “Citizens not subordinates: Partners in one nation.” If so, the statement added, the president should note that the revolution is celebrated in Egypt’s Constitution and has been used as a source of legitimacy by his own regime.

Sisi also stressed in his speech that some people are tampering with Egypt’s security, which he said he will not stand for. The alliance responded that tying Egypt’s security to the person of the president is an attempt to induce fear in citizens in order to remain in the post, and “undermines the integrity of electoral competition.”

“Don’t think about trying these things with us. I am no politician, I’m not a man of words,” Sisi continued. The oppositional alliance stated in response to this threat that governing is in essence, surely, a form of politics and that dialogue is essential in order to achieve social cohesion.

If the “situation continues,” Sisi said, he would ask Egyptians to take to the streets again to give him a mandate to “fight evil people.” Sisi asked the Egyptian people in July 2013, in his capacity as defense minister, to take to the streets in support of his fight against terrorism. The calls were met at the time by large supporting crowds, and followed by the violent dispersal of sit-ins in Rabea and Nahda squares by supporters of overthrown president Mohamed Morsi, during which hundreds were killed.

“States are not run through mandates and pre-arranged crowds, but with the constitution and respect of freedoms,” the Civil Democratic Movement’s statement asserted.

Sisi’s speech was seen by some, including former chief editor of the state-owned Al-Ahram newspaper, Abdel Azim Hammad, as “exaggerated,” seeing as there are no real threats to his political power at the current moment. “He wants to eliminate the sparks before they turn into a fire,” he said.

But “this exaggeration has had the opposite effect to what was intended,” Hammad added. “It gives the impression the president is worried, although there is nothing to be worried about. All potential candidates are [clenched] in his fist, and the statement from the Armed Forces [rejecting former Chief of Staff Sami Anan’s candidacy] proves the military is behind him.”

Several potential presidential candidates have been eliminated from the race in recent weeks, whether by direct security intervention, or as a result of the stifling political atmosphere, leaving Sisi with one last-minute low-profile candidate, Ghad Party President Moussa Mostafa Moussa, who is believed to have been handpicked by the regime to try to make the elections still appear legitimate.

Former Prime Minister Ahmed Shafiq retracted his bid for the presidency in December, after he was deported from the United Arab Emirates when he announced his intention to run; former military Chief of Staff Anan was arrested two weeks ago and remains in a military prison after the Armed Forces deemed his presidential bid a legal violation; military Colonel Ahmed Konsowa was sentenced to six years in prison in December for violating military laws, after he announced his bid, and rights lawyer Khaled Ali and former MP Mohamed al-Sadat both withdrew from the elections over their concerns as to the restricting political atmosphere.