As the pace of executions in Egypt has accelerated in the past weeks, advocates, both local and international, have shone a spotlight on the issue of the death penalty.

Those demanding the abolition or temporary suspension of the death penalty consider it a priority for several reasons: Most of all, the irreversible nature of the penalty and fear of its misuse within the current political and social polarization, evidenced by the voices hailing it as the ultimate solution to battle political and armed violence and crime.

With Egyptian authorities having executed at least 24 people since December, the most recent of which took place on January 30, several organizations have highlighted the misuse of the penalty. All those who have been executed were sentenced by military courts in political violence cases, except for four people, who were sentenced in criminal cases.

In a statement issued this week, the Egyptian Initiative for Personal Rights (EIPR) asserted that Egyptian criminal courts issued 260 death verdicts in 2017, 224 of which were against defendants in custody. Additionally, the Court of Cassation upheld 32 death sentences in the same year.

The office of the United Nations High Commissioner published a statement last week, calling on Egyptian authorities to halt executions in light of persistent allegations of unfair trials. “We are particularly concerned by an apparent continuing pattern of death sentences handed out on the basis of evidence obtained through torture or ill treatment, often during a period of forced disappearance,” the statement read.

The statement was signed by five UN experts in the fields of arbitrary detentions, forced disappearances, torture and arbitrary executions.

“These cases fell below the minimum standards for a fair trial, and many of those sentenced to death were forcibly disappeared before they suddenly resurfaced at the prosecutor’s office, or on television, confessing to committing terrorist attacks,” the statement read. “In many of the trials, defendants were denied access to lawyers, and several petitions for new proceedings were denied, despite the emergence of  exculpatory evidence. Defendant confessions were systematically coerced through torture, and in most cases, the prosecution and later the court refused to refer the defendants for forensic examination.” 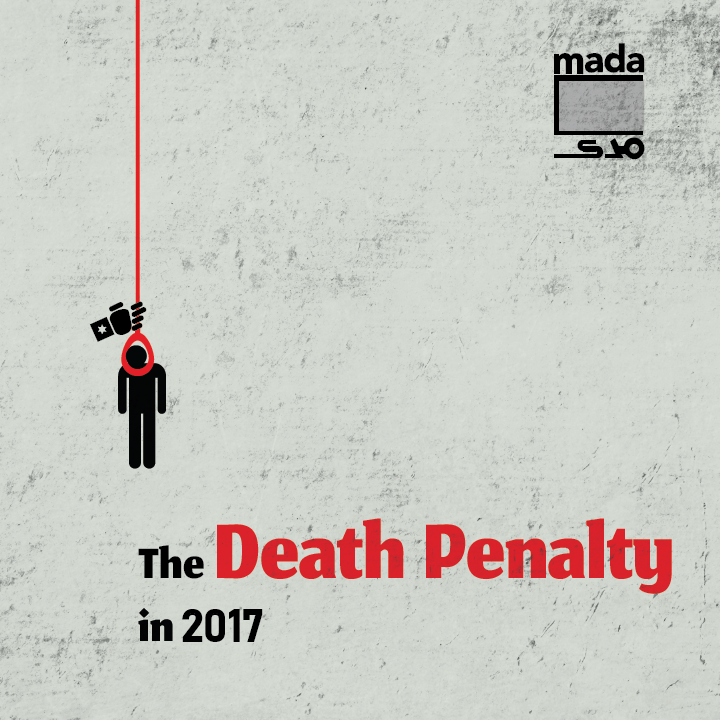 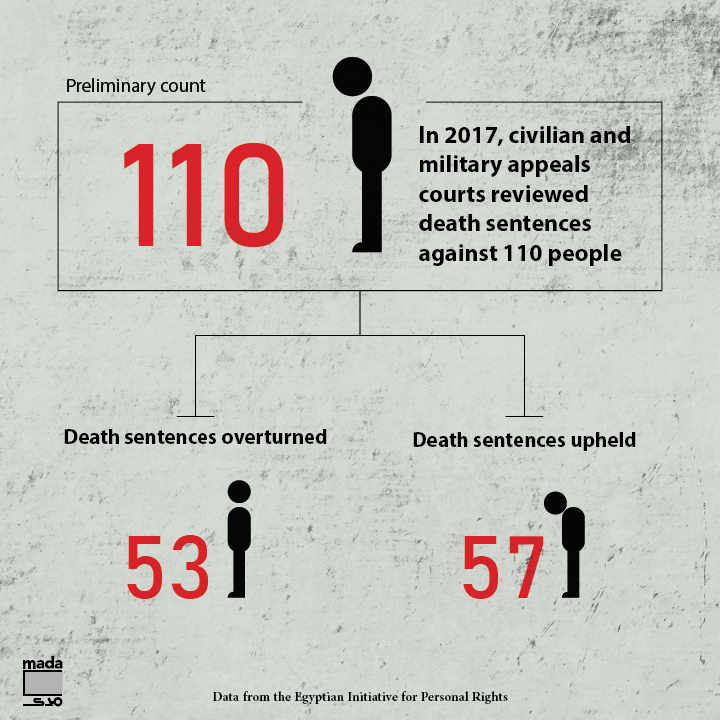 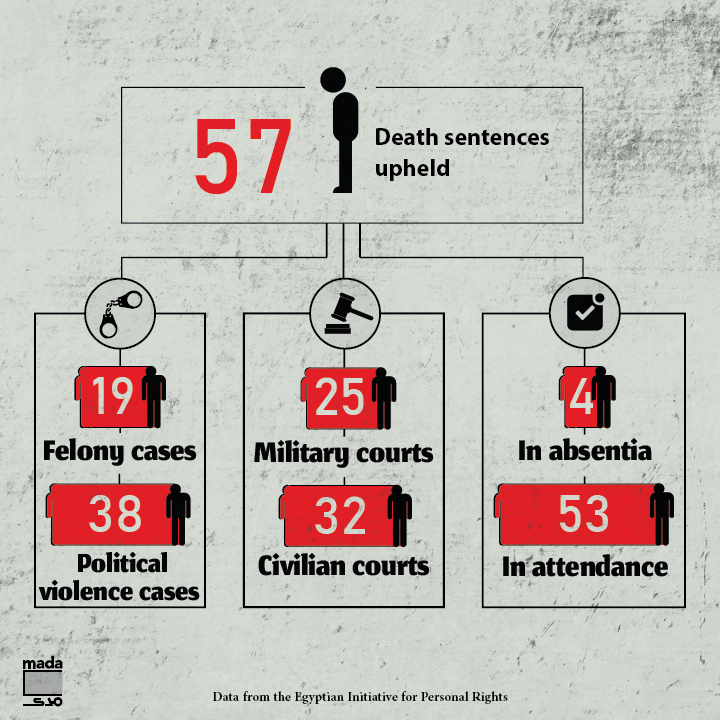 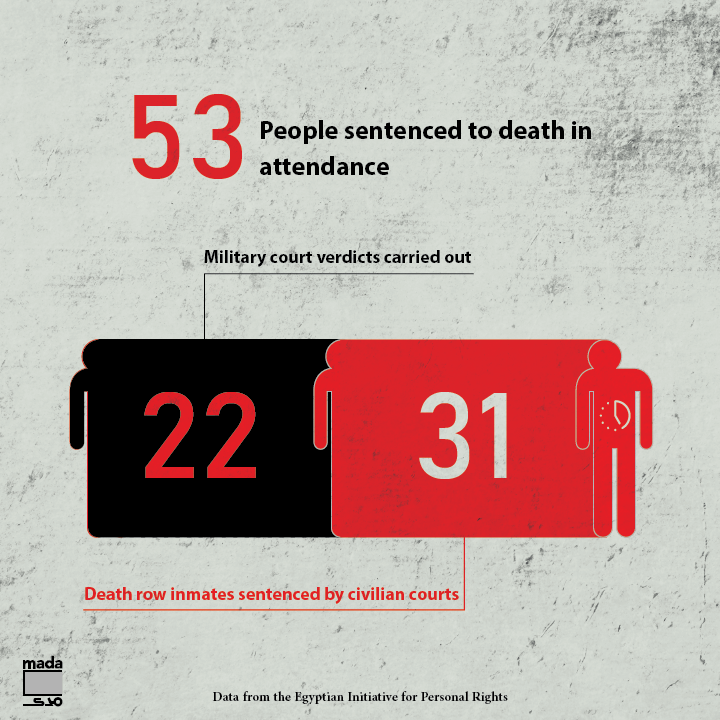 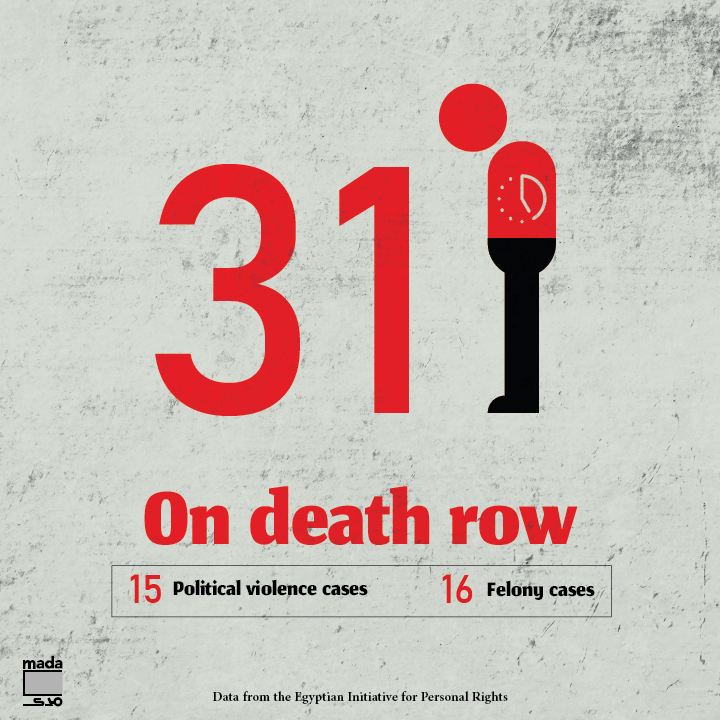 The local and international pressure is not only a reaction to the recent executions. Egypt was ranked sixth on a list of countries with the highest number of executions in 2016 in a report published by Amnesty International in April 2017. The first five countries ahead of Egypt are China, Iran, Saudi Arabia, Iraq and Pakistan.

The report also ranks Egypt fourth, after Nigeria, Pakistan and Bangladesh, in capital punishment verdicts in the same year. The pace of executions in Egypt has accelerated since 2014. 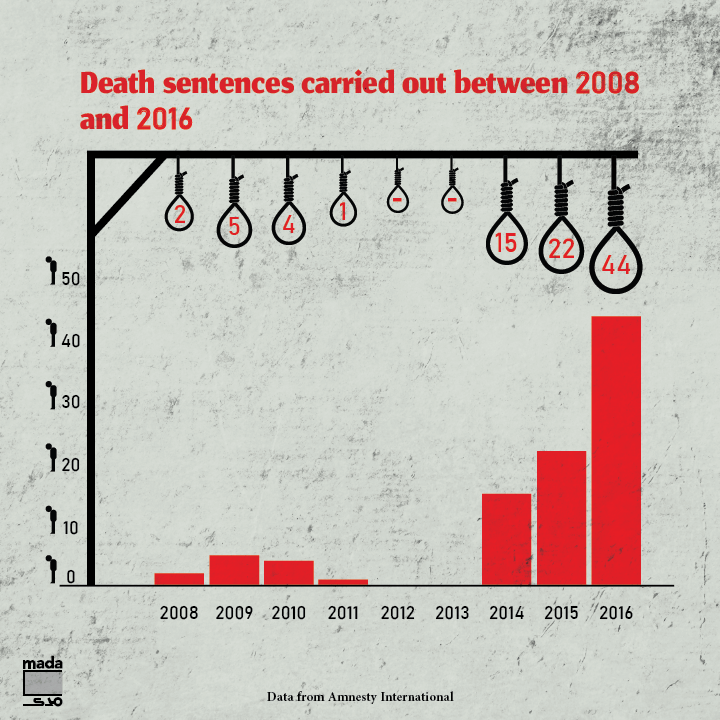 Three Arab countries — Djibouti, Jordan and Algeria — halted the use of the death penalty but did not abolish it from the law.

The Arab Center for the Independence of the Judiciary and the Legal Profession observed in a 2011 study that 56 criminal offenses in Egypt’s  criminal code are punishable by death. The International Covenant on Civil and Political Rights, which Egypt ratified in 1982 states that: “In countries which have not abolished the death penalty, a sentence of death may be imposed only for the most serious crimes in accordance with the law in force at the time of the commission of the crime.”