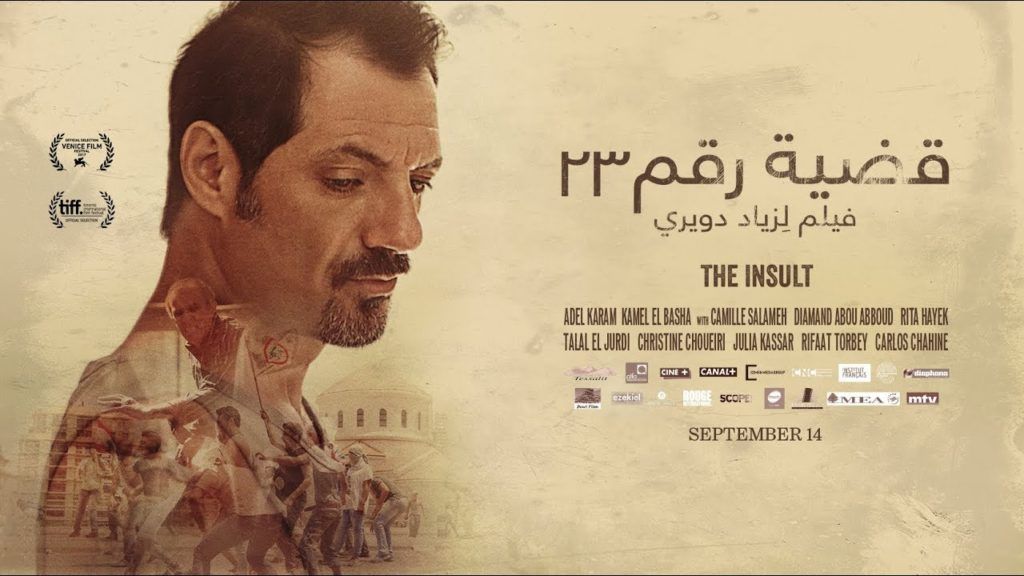 The Insult (2017), the Oscar-nominated film by Lebanese director Ziad Doueiri, was screened at Zawya Cinema on Wednesday evening, with members from the Boycott, Divestment and Sanctions (BDS) Egypt movement abstaining from a scheduled discussion with the audience, Youssef Shazli, managing director of Zawya Cinema, told Mada Masr.

The Insult, which follows the aftermath of a quarrel between a Lebanese Christian and a Palestinian in Beirut, has been met by an online campaign launched by BDS Egypt, which calls for banning the film in Egypt.

In a statement issued earlier on Wednesday, Zawya announced that BDS Egypt activist Rami Shaath would attend a discussion with the audience prior to the film’s 7 pm screening on Wednesday. Shaath was scheduled to address BDS Egypt’s position with respect to Doueiri’s latest film, the director’s alleged history of normalization with Israel and his outspoken stance against the BDS movement.

Zawya’s Wednesday statement went on to mention the possibility of another discussion with more members of the BDS Egypt movement and those who support the banning of The Insult, followed by a free screening of the film for those who want to watch it without purchasing a ticket, and therefore supporting the controversial director.

Shazli clarified that, although members from BDS Egypt refrained from publicly addressing the audience before Wednesday’s screening, they did come to the cinema to speak with Zawya’s management about the issue. “They preferred not to address the audience until we could come to a middle ground and issue a joint statement,” Shazli elaborated. “We couldn’t reach an agreement, though.”

Before extending their invitation to Shaath, and in response to BDS Egypt’s campaign, which had been steadily gaining momentum throughout the past week, Zawya issued an initial statement on Tuesday, wherein the cinema’s managing team affirmed their unwavering belief in the “clearly defined principles” of BDS, but asserted that Zawya would proceed as planned with the film screening.

Describing the movement as “a systematic, tactical strategy designed to isolate cultural products that are directly funded by the Israeli state,” the Zawya team asserted that Doueiri’s latest film does not contradict the principles of BDS, because it “was not made with any financial support from the Israeli state, nor is it directly engaged in Israeli propaganda.”

Meanwhile, Shaath, a founding member of BDS Egypt, told Mada Masr that the movement rejects Zawya’s statement, which, according to him, relies on a set of old BDS guidelines that have evolved over the years. Although Shaath was pleased to see Zawya declare their support of BDS, he clarified that the BDS movement has moved beyond solely boycotting art that supports the Israeli occupation. “That was way back in 2008,” he says.

Shaath continued that the movement fosters three types of resistance: “Boycott,” which calls for individuals to boycott products that are Israeli or that support Israel, “Divestment,” which calls for organizations and institutions to withdraw any investment or funding that supports activities promoting Israel, and “Sanctions,” which calls for states to impose sanctions against Israel for violating international law. By screening, and therefore promoting, the work of a director who previously “lived and worked with Zionists” while filming The Attack, Zawya’s screening of The Insult falls under the “Divestment” segment of BDS. Even if The Insult was not filmed in Israel, Shaath asserts that Doueiri should be punished for his previous actions.

Zawya’s Tuesday statement also referenced the guidelines of the Palestinian Campaign for the Cultural and Academic Boycott of Israel (PACBI) which, the statement says, “could not be clearer.” According to Zawya’s managing team, BDS Egypt’s call to ban Doueiri’s film is dangerous, as it “crosses a line that BDS has been very careful not to cross.”

Shaath criticized Zawya’s use of the PACBI guidelines to justify their position, however. Claiming that the PACBI guidelines are primarily directed towards European states, Shaath stressed that Arab states should use stricter guidelines when dealing with Israel. “We do not recognize the state of Israel in the first place, and so by being lenient with normalization, we are practically  announcing our acceptance of the occupation of Palestine,” he insisted.

Although BDS Egypt released a statement on Tuesday evening stating that Zawya had ignored their contact attempts and deleted Facebook comments that called for the film to be banned, Zawya’s Wednesday statement refuted these claims. “We spent all of Tuesday trying to reach a BDS representative before issuing our first statement, but we couldn’t,” Shazli told Mada Masr. “We were very keen on starting an open conversation about the issue, and this is why we invited them to the cinema, offering them a chance to engage in a discussion with the audience, and even to distribute any flyers that articulated their position if they wished.”

The Insult was met with a similar controversy in Tunisia last November, when it was screened at the Carthage Film Festival. In October, the Ramallah Days of Cinema festival dropped Doueiri’s film as a result of pressure from BDS activists.

Both incidents came after Lebanese authorities stopped Doueiri at Beirut Airport in September of last year. The director was summoned for interrogation by a military court and accused of treason because he worked with Israel while shooting The Attack.

Despite the controversy triggered by Zawya’s Wednesday screening , this was not the The Insult‘s first screening in Egypt. During the first edition of El Gouna Film Festival last September, The Insult was screened and awarded the Gouna Silver Star award.