Zobaida: A surrealism of the everyday

With the intention of buying a ticket early, I arrived at El Nahda Jesuit Culture Center half an hour before the start of the show, on the advice of Zobaida’s crew who had announced on Facebook that seats for the musical were limited. My optimism was dampened when I found myself standing in a queue so long I couldn’t tell where it began or where it ended. The anticipated half hour dragged on to exceed the 60-minute mark. I was just about to leave when Salam Yousry, a founder of The Choir Project, came out at the last minute, apologizing to me and the rest of the crowd, and promising everyone a space in the theater.

And so, I found a seat at the periphery of the circular stage, close to the singers. Oblivious to the centrality of my location, I was startled when the music came on, signaling the start of the show. In truth, the experience of watching Zobaida: Beyond the Horizon does not fulfill its full potential unless you, as a spectator, are part of the stage, as I fortunately was.

The Choir Project is an international, volunteer-based project which operates separate songwriting and group performance workshops that are open to professionals and amateurs alike. It is not a troupe but rather a mobile entity, whose members change with every workshop. They pick the themes they will work on themselves, and then turn the culmination of the workshops into full-fledged performances.

Zobaida is the result of one such workshop, which started in April 2017 in celebration of the seventh anniversary of the founding of The Choir Project. It is a collective production, down to its tiniest details. There are five main characters in the musical: Zobaida, Hommos, Nora, the Basha and the aunt. 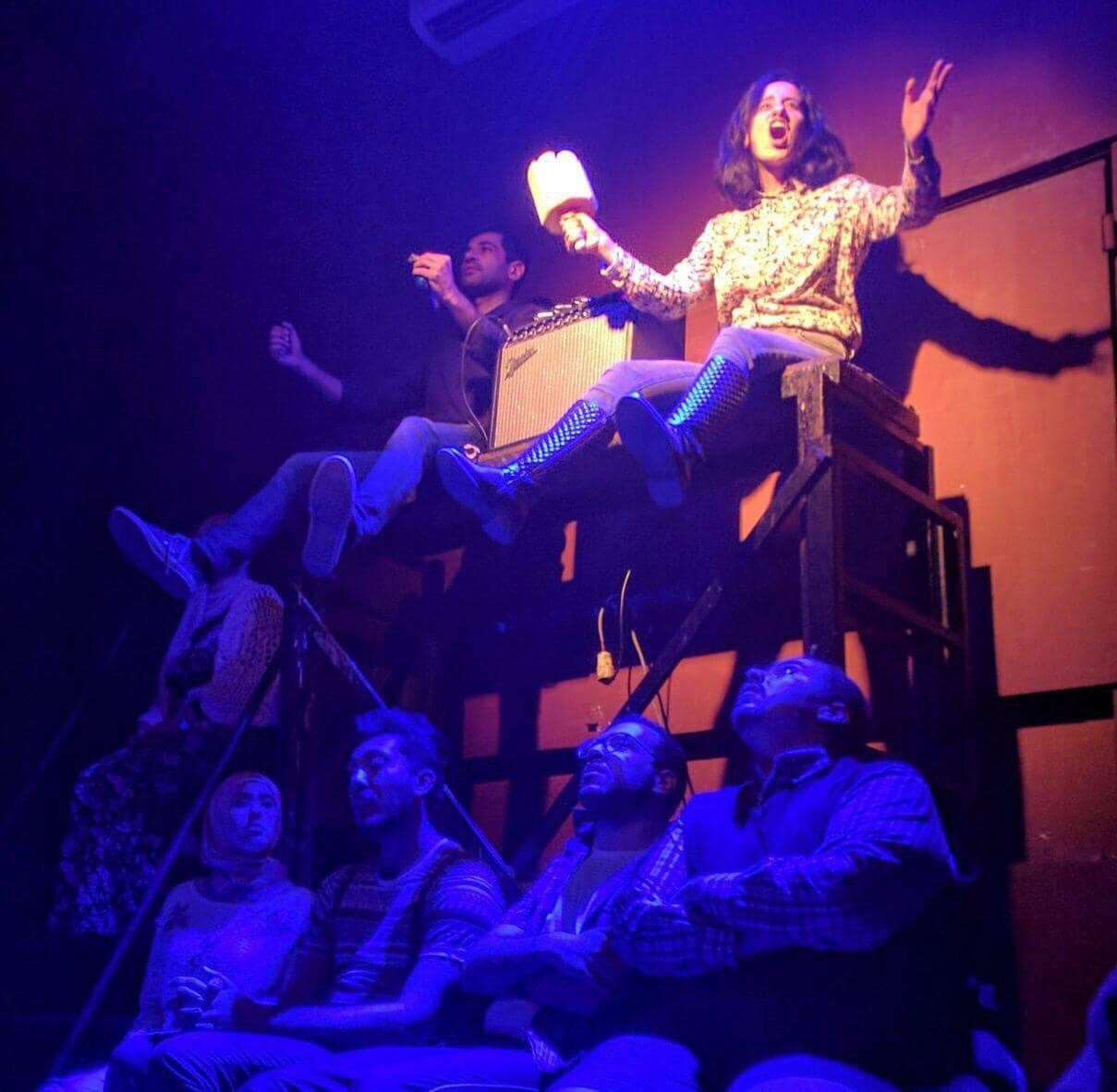 Although she is the titular character, Zobaida is an idealized presence in the musical–we never see her, we only hear about her. Hommos, meanwhile, opens the show with a series of innocent phrases recalling his childhood as a “kid in underpants.”

His memories intertwine with his dreams, and the resulting surrealist, cinematic montage is effective in transporting us along with Hommos from one time period to another. The audience is gradually subdued into embracing the nature of the performance, which spans the stages of childhood, adolescence and the characters’ late teenage college years. As we reach the end of this timeline, Hommos is again rendered as youthful and bewildered, just the way he started.

As a result of the interplay of memory and storytelling permeating the show, the concept of time in Zobaida is elastic. In little games of magic we move between hands and cities, not really knowing what we’re looking for, yet we continue to search, until we reach the third character: Nora, the teenage girl Hommos falls for.

Nora introduces us to her scattered life, bouncing between her aunt, the cats in the alley behind her house in Basateen and her dreams of traveling to Paris. Even when Nora cries in disappointment and resignation after her trip goes awry, retreating from her fantasy, she makes us laugh.

The fourth character is the Basha, a stand-in for the figure of the police officer, though he is still in the development phase and has not reached his final, authoritative form. His demeanor as he fiddles with the overalls he wears reflects the constant alienation and helplessness he feels, for which he finds no outlet but to bully his classmates—a pleasure that is not yet as destructive as it is sure to later become. 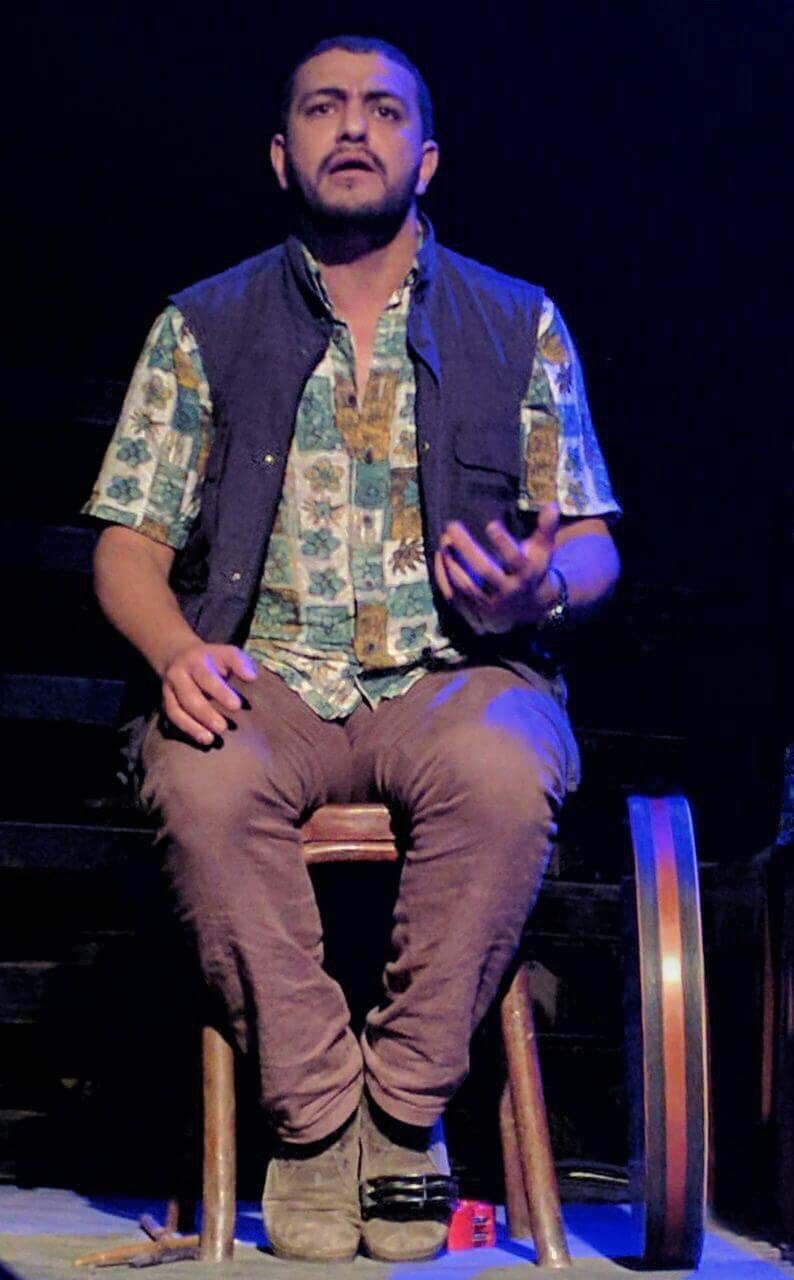 There is also Nora’s aunt, who represents the all-encompassing authority of the mother figure, embracing the children at the end of the performance. She rewards some while punishing others, and uses the word “khara” (shit) when calling Nora, Hommos and the Basha, who is unable intimidate her during confrontation as he does with Hommos.

More points of interest are a school backpack, the journey of which we follow across people and continents, and a dead cat. Her spirit lingers, as she saunters up and down down the beach, singing about a ball of yarn that was snatched from her by a nightmarish hand, putting an end to her fun. This theme of things being snatched, of obstacles hindering the fluidity of dreams, is recurrent in the performance. It is a force that resembles a counterrevolution and one that plays the role of the comma, taking us from one phrase to the next, and from one story to another.

Both Nora and Hommos are played by several actors in alternation. Zobaida is a game of masks, and of continuous remembrance and omission. This is, after all, what The Choir Project is all about: games. And only when we realize that do we become capable of entering their imaginative theater, enjoying the act of spectating, without which Zobaida, as a work of art, cannot be complete.

We discover these fragments and remembrances through a series of songs performed in colloquial Egyptian, with familiar references from middle-class life giving us insight into the characters as well as the dynamics that govern their relationships. For example, Hommos wakes up from his nap on the beach to the sound of Alaa Abdel Khalek’s Tayyara Waraa (Paper Kite) blasting from a cassette player, instantly recalling the 90s, the time period in which the January 25 generation came of age.

Perhaps the reason why Zobaida swims “beyond the horizon” rather than before it, and why the show lacks a traditionally architectured narrative, is that it was produced collectively and as the result of workshopping and improvisation, in the absence of a conventional writer-director duality. The language used in the show is the same one used by the actors before they ascend to the stage and get into character. In fact, in Zobaida they don’t ascend at all —they are singing and dancing among us.

Perhaps the reason behind the performance’s ability to keep its audience engaged and laughing throughout its hour-long runtime lies in how it releases them from the burden of chasing storylines, gripping some and letting go of others. We are held in a void where the logic of the real world doesn’t exist, and yet we are at the very heart of life itself. Perhaps we’re unable to remember how Hommos loses his backpack in the beginning of the show, but the way Zobaida emerges out of it like a fairy in the end is sure to leave us spellbound.

Zobaida is a triumph of rebellious theater: a theater that rebels against traditional methods of production as well as traditional modes of viewing. Everything in that dimmed hall was part of the show—I felt as though my own bag, the chair I sat on, and even my restless anxiety as I breathlessly followed the details of each scene, were all part of Zobaida.

I am more than ready to forget my anger at the lengthy queue and long wait time ahead of the show. I now understand why the theater was packed to overflowing.

Zobaida: Beyond the Horizon is set to return to El Nahda Jesuit Cultural Center for another short run in early March.

AD
You Might Have Missed
Where do old lesbians go to die?
Carbon Colonies & A Green New Deal
What we talk about when we talk about trees
Mugamma revisited: Reimagining the building and the square
AD
Areej Gamal
2 articles on Mada

Topics
Related
theater reviews
A state-approved play distills Islam’s history to its most regrettable parts
Rose Elbay | How does a government-approved play called Mohamed feel about the slaughter of “infidels”?
theater
Observations on the Cairo International Festival for “Contemporary and Experimental” Theater
Natik Awayez | On the artistic responsibilities of presenting an arts festival, & moving away from modernism
theater reviews
Shady al-Daly’s new play pokes fun at happiness gurus
Amany Ali Shawky | The Magical Recipe for Happiness asks its audience to stop listening to those who think they know better
Alexandria
Q&A on why Theater is a Must in Alexandria
Rowan El Shimi | Rowan El Shimi investigates why Alexandria's political theater forum might be coming to an end.