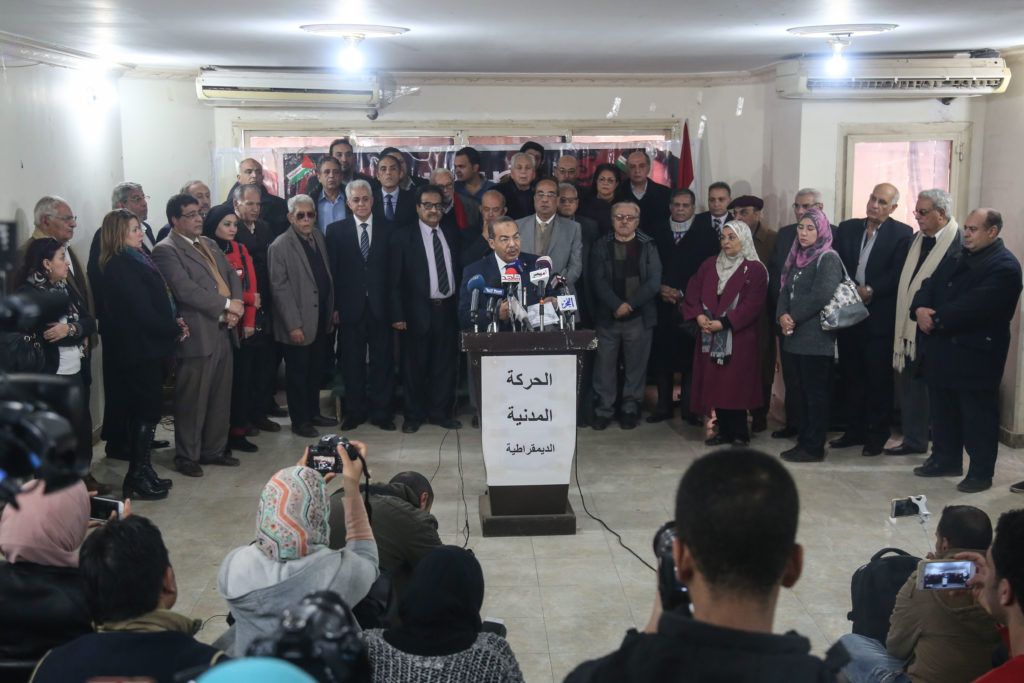 The Civil Democratic Movement, an alliance of opposition parties, called for a boycott of the upcoming presidential election in a Tuesday press conference.

Yehia Hussein, the Civil Democratic Movement’s spokesperson, delivered a statement during the press conference, in which he explained, “This is not just an electoral process that lacks guarantees, and which we can discuss our position towards. This has turned into a total deprivation of the Egyptian people’s right to choose a president, and is an absurd scene that we refuse to take part in. We call on all Egyptian people to share this stance with us.”

Akram Ismail, political officer of the Bread and Freedom Party, said that Khaled Ali, who is a member of the party, did not attend Tuesday’s press conference because he had insisted that all members of the opposition, including Strong Egypt, the April 6 Movement, and the Revolutionary Socialists, should be included. Ali’s position was rejected by other members of the Civil Democratic Movement, who decided to limit their invitations to the political parties that are already part of the movement. Ismail clarified, however, that other members of the Bread and Freedom Party attended the press conference, and will continue to collaborate with the Civil Democratic Movement.

Mohamed Fawzy, a member of the Strong Egypt Party’s political bureau, told Mada Masr that his party is not part of the Civil Democratic Movement, and thus was not invited to the press conference. However, Abouel Fotouh was one of the signatories on a statement signed by several political figures on Sunday, which demanded that the National Elections Authority (NEA) halt the elections and called for a boycott of the 2018 electoral process.

Fawzy confirmed that his party is prepared to collaborate will all members of the Civil Democratic Movement, regardless of ideological differences.

Head of the Karama Party, Mohamed Fawzy, said during the press conference that instances of intimidation and violations of the Constitution have marred the months leading up to the presidential election. The party leader went on to note that these violations have gone so far as to culminate in the assault of a prominent political figure, adding that these actions have endangered state institutions by dragging them into political battles.

George Ishaq, a member of the National Council for Human Rights who also attended Tuesday’s press conference, stated, “This regime has become void of politics, and we’ve never witnessed such political absurdity.”

Sabbahi concluded the conference by affirming that the decision to boycott the 2018 presidential election was taken in the name of all those harmed by oppression, rising prices, unfair detentions, forced disappearances and all other forms of persecution, declaring, “There are no guarantees, no candidates, and no freedom. So, there are no elections.”