How do we recall painful memories? 7 years on, remembering is an act of defiance against erasure

We were all there in those painfully hopeful days, some of us physically, others only in thought. We didn’t all meet there, or maybe we did. I’m not always sure anymore what is flashback and what is conscious recall, or projection.

I can see them all so vividly, as if I were there with them, as if I saw them with my own eyes, as if I can see them now. The stories they told me have been recounted with such detail: what they were wearing, how it smelled, the sounds they heard. No detail is insignificant. They describe, and it is as though we are watching together. I don’t interrupt, I don’t need to. We are both watching and both experiencing somehow. Which of us is the observer?

I can see Houda as clearly as if he is stood right in front of me, or even as if I already saw him and am recalling a vivid memory of my own. I see him in the smoke and the gas, he is throwing rocks at police vehicles, retreating and attacking, going back and forth as opportunity allows and covering his mouth and nose with a scarf so the teargas doesn’t knock him out. He is screaming, shouting in fear and anger.

I can see Farida in her small dorm room in London. Her hair is messy and her eyes red from not sleeping or eating in days. She falls asleep at her laptop as she squints to see every piece of news from Tahrir. Her whole world has become this screen. She needs to be part of it all in any mode she can, despite being so many miles away, on another continent. And she is, in a way. 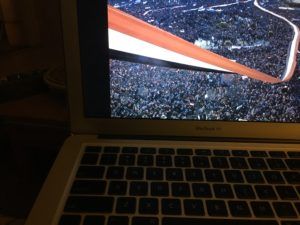 I can see Shymaa holding her two-year-old son in her arms and standing on the street watching the clashes. She covers his face with a piece of cloth, afraid he will suffocate from the gas and not knowing how to be a good mother. What would a good mother do? Should she go into the crowds with him in her arms and defend his right to a better future, or run and take him far away and keep him safe? But safe for how long? And what then? What kind of life will he have if she runs home with him now?

I see Michael walking with the crowd from Shubra to Tahrir, screaming for his rights as a Copt and as an Egyptian, feeling proud to be both. I can see Sarah terrified of the crowd, all these people who look so different from her and her friends. People she has spent years avoiding, trying not to see, not to interact with. Now she is in the midst of it all, surrounded by them and protected by them. I see myself, a timid woman in her twenties, trying to be part of something bigger than herself.

What do we do with painful memories? Often, we shove them aside or bury them inside us out of a need to press on, to survive. Some of us cannot afford to recall or reflect on them as much as others. What about collective memories? There was a  time between 2011 and 2013 when we compulsively remembered as a way of being, of processing, of belonging. We consciously told our stories, stories like these, over and over again. There are perhaps many reasons we stopped telling them as much; for some of us, they became too painful, for others, too dangerous. The pressure to stop remembering didn’t just come from the state, it came from our families and peers. In some instances there was judgement, heaviness, failure, defeat, or an attitude of — “why haven’t you, we, moved on?”

It is either not permitted, or not in vogue anymore, to discuss Tahrir. It’s kind of okay to discuss the fallout, to fight about the consequences and the politics of it all, but the memory itself is seen by many people now as somewhat “naive.” Why do the memories keep coming back, then, or why do we recall them? Why do we ritualistically remember our collective failures?

Sometimes I get uninvited flashbacks, like vivid scenes of a dream or a movie I’ve seen before, and in many ways this makes them take on a surreal nature. They cunningly creep back, despite my best efforts to suppress them, almost as though they have a life of their own. They resurface at moments I least expect them to — in my work, my art, my research, when I’m stuck in traffic or in cold Berlin, surrounded by people who don’t know or maybe don’t care about my experiences.

I was once asked why I collect and record stories, and what is the point of writing about the revolution? I answered impulsively, “Because it happened and the memory refuses to die.” The memory fights back against all attempts to oppress it, to tame it, to erase it, perhaps in reaction to our combined efforts to remove it emotionally and materially.

I often ask myself why people trust me with their stories. I would like to think it has to do with shared politics, or my efforts to build rapport, empathy. But I also think there is something to this idea of the memories themselves taking on lives and meanings of their own through their retelling. Does this moment of shared remembrance, that is so full of emotion, have to be devoid of criticality? Do we notice how we imbue certain things with meaning and erase or silence others in our attempts to empathize with one another?

The stories are persistent and keep coming out. This year, a number of projects are seeking to recirculate memories and archive visuals. After all this time of trying to analyze and reflect and mourn, it seems like we are saying that the memories themselves are what we want to preserve, as an act of defiance against erasure, archiving as resistance. Feelings and emotions are evidence too, bare and stripped down.

It is true that I went looking for them intentionally — the feelings and emotions. I wanted something more than words, a transmission of sorts. They say ethnography is the excavation of the personal, but as I ask and empathize, I’m also excavating my own thoughts, digging up painful memories of my own, and with violent memory, there is an element of recall that is not conscious, or at least not always within our control.

Seven years on, it may not be a choice to forget entirely, as the flashbacks still haunt many of us. But how we choose to remember collectively is and can be more deliberate.

To protect their anonymity and for their safety, pseudonyms were used for all those mentioned in this article.

AD
You Might Have Missed
What we talk about when we talk about trees
Where do old lesbians go to die?
Mugamma revisited: Reimagining the building and the square
Carbon Colonies & A Green New Deal
AD
Dina Wahba
5 articles on Mada

Topics
Related
January 25 2017
The politics of the personal: January 25 through the lens of depression
Naira Antoun | An exploration of hope, defeat and mental health in the aftermath of revolution
2016 year enders
Coping mechanisms: Late night walks and spinning tops
Laura Bird | As 2016 draws to a close, some Cairenes' anecdotes on how they deal with political and personal difficulties
January 25 2014
The anniversary of the revolution through the headlines
Pesha Magid | Sunday will mark four years since the start of Egypt’s January 25 revolution. But it is also Police
January 25 2014
Revolutions worth remembering
Alia Mossallam | Editor’s note: We found it hard to solicit pieces commemorating the January 25 revolution, mainly because