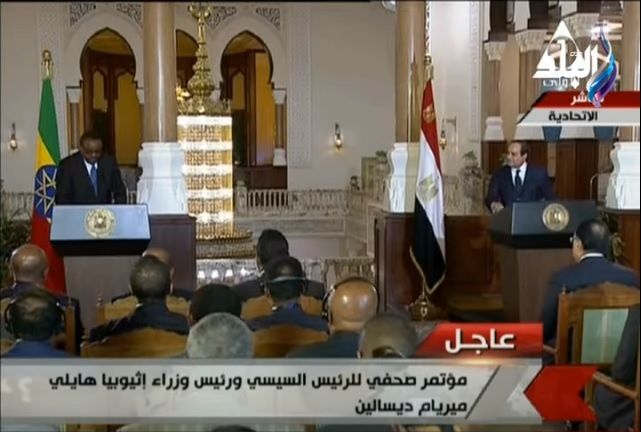 Egypt’s Foreign Minister Sameh Shoukry telephoned his Ethiopian counterpart on Sunday night to express concern over a news report that Ethiopia had rejected Egypt’s proposal for the World Bank to mediate the technical studies on the environmental impact of the Grand Renaissance Ethiopian Dam.

“Shoukry called to discern the accuracy of the statements and to express Egypt’s worry over them,” Abu Zeid said. “If any party rejects or has a problem with the initiative [to involve the World Bank in the negotiations over the technical studies], they must provide convincing reasons. The situation cannot bare further delays.”

Abu Zeid reiterated Egypt’s desire to include the World Bank in the negotiations, which he stated are a technical rather than political matter.

“We will wait for the tripartite meeting in order to reach a clear decision not subject to individual interpretations from Ethiopia and Sudan,” the spokesperson said.

The Ethiopian News Agency spoke with Desalegn over the weekend, after he returned from a two-day Ethiopian-Egyptian summit in Cairo.

“Seeking professional support is one thing. Transferring [arbitration] to an institution is another thing. So we told them that this is not acceptable to our side,” Desalegn was quoted as saying in ENA.

The news story in which the prime minister’s comment originally appeared has since been taken down.

Egypt’s Foreign Minister Sameh Shoukry proposed the World Bank’s involvement in the issue in December, but the Ethiopian prime minister did not pledge support for it.

During a press conference marking the close of the summit, President Abdel Fattah al-Sisi  expressed his “grave concern” over the state of the negotiations. In the leadup to the meeting, an Egyptian government official speaking on condition of anonymity told Mada Masr that negotiations with Ethiopia were becoming extremely bumpy and are approaching  a “dead end.”

Sisi also said that, while the Ethiopian prime minister did not agree to involving the World Bank, he affirmed the importance of involving Sudan in the negotiations and floated the possibility of bringing a different third party on board. Sisi, however, stated that more time would be lost in choosing another third party.

The dam has been a site of diplomatic tension between Cairo and Addis Ababa since construction began in 2011. Egypt has continually reiterated its claim to its historic share of the Nile’s water, expressing concern that the filling of the dam’s reservoir will affect downstream flow to its 100 million-person population.