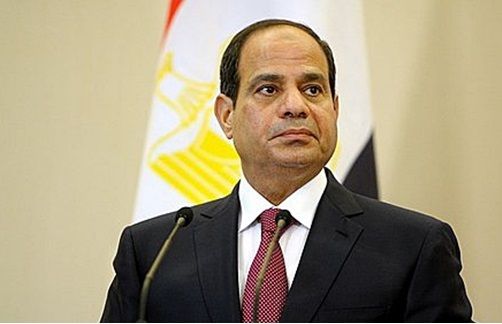 President Abdel Fattah al-Sisi announced on Friday that he will stand for reelection in Egypt’s 2018 presidential election, in which voters are scheduled to go to the polls in March.

“What was accomplished, although great, is not the extent of my ambitions for Egypt,” Sisi said in his announcement speech. “I never did and never will seek power.”

Egypt’s president also asserted that the country’s citizens will have to suffer along with him, showing extreme patience as the country overcomes the challenges it is facing.

The announcement came at the end of a three-day conference titled The Story of a Nation, where Sisi and Prime Minister Sherif Ismail’s Cabinet presented the achievements of his first term as president, highlighting the Suez Canal extension, housing projects, infrastructure enhancement and the efforts to fend off “terrorism.”  The conference’s program framed Sisi’s time in office as a period spent working toward protecting and building the Egyptian state.

According to the elections law, a presidential candidate has to collect endorsements from at least 20 members of Parliament or 25,000 voters from 15 different governorates, with at least 1,000 endorsements coming from each of the 15 minimum governorates.

Five hundred and sixteen of Parliament’s 596 members submitted forms endorsing Sisi’s bid by January 14, and the president’s supporters have also been pushing for citizen endorsements.

The National Elections Authority (NEA) announced on Tuesday that 412,000 Sisi endorsements have been signed at Authority of Real Estate Proclamation and Notarization offices, which are responsible for accepting candidate endorsements. Some citizens have been given monetary incentives to sign endorsement forms, according to a report published on Mada Masr on Friday.

The Egyptian Constitution limits an individual to two presidential terms in office, which cannot be renewed.

Sisi rose to prominence while serving as Egypt’s defense minister. He saw a surge in popularity after the Armed Forces, under his leadership, ousted former President Mohamed Morsi on July 3, 2013 on the back of widespread protests against his presidency. After initially declaring he had no intentions to run for office, Sisi resigned from his military post and ran in the 2014 presidential election, taking home over 96 percent of the vote. His initial popularity, however, was tested during his first term, which was marred by political repression, economic hardship and security issues.

Egypt’s presidential race has few candidates, with some noting that they have faced intimidation and marked hurdles in mounting a campaign.

“Those who are corrupt who dare come near the [president’s] seat should be wary of me. I will not infringe on your rights, but there are people who I know are corrupt, and I will not allow them to approach this seat,” Sisi said earlier on Friday at the conference.

The only other confirmed candidate hoping to run against Sisi is rights lawyer Khaled Ali, who announced his bid for presidency on January 11. Whether Ali will remain in the presidential race depends on if he collects the requisite endorsements in the 10-day window that ends on January 28 as stipulated by the NEA in its tight elections schedule. The rights lawyer may also be affected by the outcome of an appeal against a public indecency conviction.

The Masr al-Orouba Party has nominated its president, former Armed Forces Chief of Staff Sami Anan. Anan was a contender in the last presidential elections. However, he has not confirmed his 2018 candidacy yet.

Ali called on supporters to deliver his endorsements via a human chain stretching from the campaign’s headquarters to the NEA headquarters in downtown Cairo on the seventh anniversary of the January 25 revolution.

Former presidential candidate and Mubarak-era Prime Minister Ahmed Shafiq announced his bid for presidency in late November, after which he was reportedly deported back to Egypt from the United Arab Emirates, where he had been living since narrowly losing the 2012 election to Morsi, and briefly detained. Shafiq withdrew his bid for candidacy earlier this month. A former MP, head of the Reform and Development Party and presidential hopeful, Mohamed Anwar al-Sadat also backed out of the election in January, citing fears for the safety of his supporters.

According to the NEA’s election timeline, candidates must submit their candidacy papers between January 20 and January 29. Polls in Egypt will be open on March 26 to 28, with voting for Egyptian nationals residing abroad taking place on March 16 to 18. The NEA is expected to announce the results on April 2.