A song of the Crusades in the voice of the Gulf: On Wael Shawky’s latest performance

Stage detail from Wael Shawky’s The Song of Roland: The Arabic Version
By
Adel Abdel Wahab
Translated by
Assmaa Naguib

The Song of Roland: The Arabic Version is the latest work by Wael Shawky, widely considered to be one of Egypt’s most prominent contemporary artists. The performance, which opened in Hamburg’s Theater der Welt in mid-2017, toured Amsterdam and Zurich before closing at the Onassis Cultural Centre in Athens on December 30. The song itself, which constitutes the main material on which Shawky’s new performance is based, originated in the Middle Ages, and recounts a battle between the French army of King Charlemagne, and an Andalusian army marching on France. One of the oldest cultural works from the time of the Crusades — a source that inspires most of Shawky’s performances — it was used to rouse and motivate European soldiers during their campaigns in the East. Even though the battle referred to did not take place on Arab lands, the army attempting to conquer France was made up of “Saracens,” a term used by Europeans to refer to Muslims at the time.

In this recent performance, the artist’s newly selected medium is theater. For Shawky, whose preferred medium in most of his conceptual artworks is video art, this performance represents a qualitative shift in the nature of communication with the audience: At the end of the day, video art is a relatively more elitist choice in comparison to other artistic mediums. And although Shawky still seeks inspiration from his favorite source, he doesn’t tell a story of a specific incident as he has done before in previous works, which are centered on the theme of the Crusades. Here, Shawky features a song from a time that preceded the war itself and was only later on employed to motivate the knights heading to the East to fight the “Muhammadans” or the “pagans,” (both labels given to Muslims at a time when the belief that they were pagans who worshipped Muhammad was widespread).

In the Arabic version of The Song of Roland, and as can be gleaned from the title of the show, Shawky presents a song the Crusaders sang to glorify their victory against the Arabs and to exalt their bravery, which stemmed from a true faith in the superiority of their creed as Christians over the Muslim Arabs. This is the idea of the performance in a nutshell. Shawky offers neither an artistic engagement with the incident nor a personification or representation of events. How, then, does he present the song? In what ways is it an Arabic version?

Shawky translates the song of Roland, which he obtained from a number of different sources, into classical Arabic. For more than one hour, 20 vocalists perform the song in fidjeri, a type of music that belongs to the heritage of the Gulf and is associated with pearl diving, which was the most important economic activity in the region before the discovery of oil. The song is performed exclusively by men, and the musical instruments that Shawky employs include simple folk instruments, such as small drums or large clay pots. Meanwhile, the background of the set is a beautiful stereoscopic map inspired by the maps of the Middle Ages, on which the cities of Aleppo, Baghdad and Istanbul can be seen. 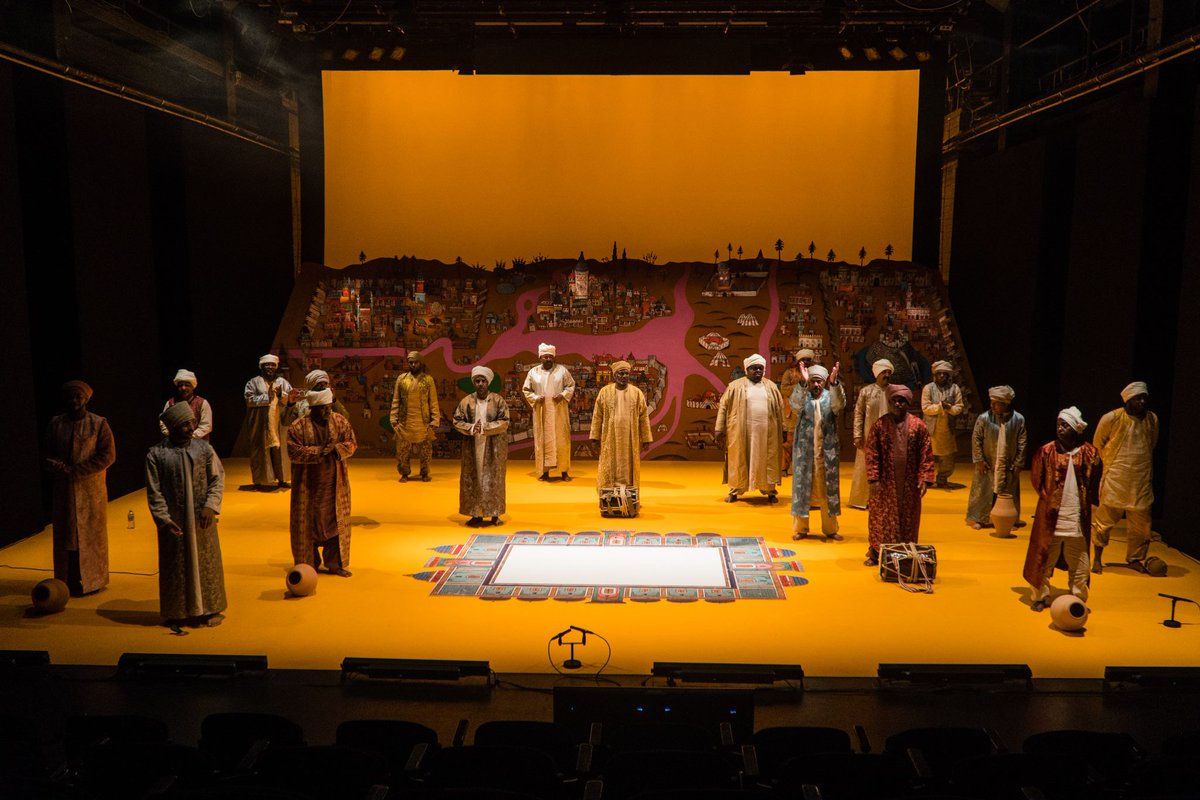 Wael Shawky’s The Song of Roland: The Arabic Version

The singers are seated throughout the performance, sometimes making rhythmic movements or clapping their hands. The lyrics are often not entirely clear, as the fidjeri style depends on creating sharp notes that somehow resemble the ritualistic hymns recited in Egyptian orthodox churches, and therefore the audience often has to rely on the accompanying English subtitles to understand the meaning.

Although this singing style is replaced with another in which the lyrics are clearer near the end of the show, in all cases, the monotony of the singing can only push you toward one of two options: either you will enjoy the singing or you will find it disturbing. The more prominent words, or those that I was able to understand, were the names of people such as Muhammad, Charlemagne and Roland, the leader who was killed in battle, in addition to some statements about the superiority of Christians or dead Muslim fighters.

Yet despite the obscurity, there is a story. Shawky may have reproduced the original song without alteration, yet he has modified its context, employing Gulf voices as audio containers that do not intervene with any  trace of emotion: They are simply human trumpets. Shawky reminds contemporary, cultured Europe — a Europe that has apologized for the Crusades — of its history of war in the dark Middle Ages. Here, the Muslim enemy sings a historical song of Christian pride, the content of which is directed against him.

The Arabic version of The Song of Roland is only one performance in Shawky’s larger project about the Crusades, the most significant staple of which is his Cabaret Crusades trilogy, where historical stories are presented by puppets. He clarified once after a performance at Theaterspektakel in Zurich, that he prefers using children and puppets in his performances as he rejects a conscious intervention in the work he presents. This may explain why Shawky resorted to a Gulf band committed to a specific style of singing, in order to express the song as raw material without any refinement or additions. Moreover, the choice of a Gulf band in itself guarantees separating form from content: the kingdoms of the Gulf are recent entities and the Crusades are not part of their historical background as much as they are of the Levant’s, Egypt’s and Iraq’s. 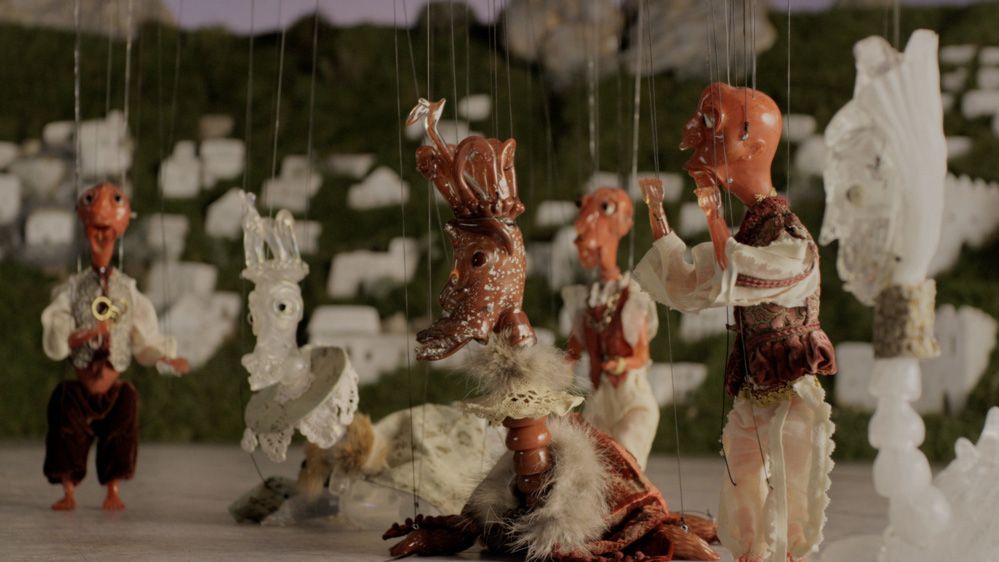 In its form, the Arabic version of The Song of Roland is consistent with Shawky’s wider artistic oeuvre, where he often presents old texts in absurd contexts. Shawky’s most cherished artistic ploy is exchanging roles in an official narrative. For example, in his film, he uses Italian and French ceramic puppets to perform a dialogue inspired by the Arab historian Usama Ibn Munqidh, whose narrative, in Shawky’s view, deserves more serious attention. Shawky often selects one incident, based on one historical narrative, and then repackages it artistically. In other words, he frames these events in a manner similar to that of pop art pioneer Andy Warhol, who reproduced Campbell soup cans, for instance, as works of art in a new context.

In his art, Shawky avoids direct engagement with the current societal dialogue in Egypt and other Arab countries about symbolic historical figures that exert a moral authority over our lives, such as Salahuddin al-Ayubbi, Ahmed Orabi, Ibn Taymiyyah or Gamal Abdel Nasser. He seeks, however, to create his own approach — one that suits his identity as a contemporary conceptual artist who perhaps perceives his role as limited to shedding a new light on the can of soup that everyone consumes.

AD
You Might Have Missed
Mugamma revisited: Reimagining the building and the square
Where do old lesbians go to die?
Carbon Colonies & A Green New Deal
What we talk about when we talk about trees
AD
Adel Abdel Wahab
3 articles on Mada

Topics
Related
visual art
More than quintessential Egyptian motifs: On Chant Avedissian in Madrid
María Gómez López | Transfer, Transport, Transit, points to the artist’s research and ambitions beyond nationalistic imagery
visual art
Wael Shawky in Milan: A cosmopolitan artistic ecumenopolis exists just behind the carnage
Dan Jakubowski | How communities interact and change one another through war and material culture has long been of concern
visual art
MASS Alexandria 2016: A busy and approachable final exhibition
Lara El Gibaly | Three days of contemplation and conversation, between the deeply personal and the public.
Ala Younis
Certain narratives persist: Here and Elsewhere
Jenifer Evans | Here and Elsewhere was an exhibition of artists from the Arab world at New York City’s New Museum.