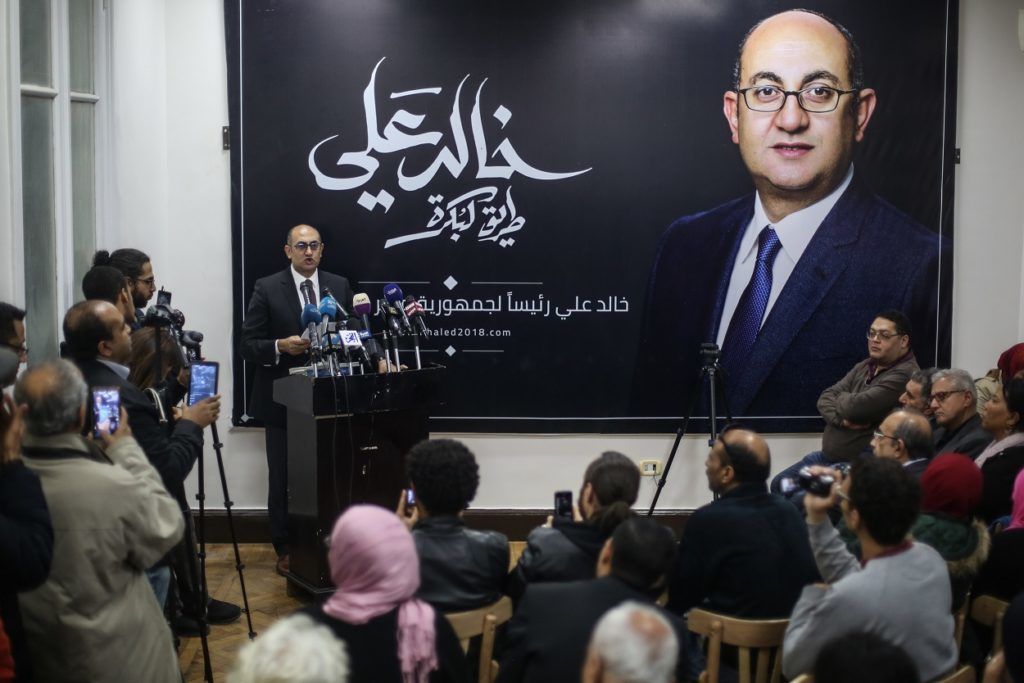 An appeal hearing for potential presidential candidate and human rights lawyer Khaled Ali concerning a verdict issued against him for “public indecency” was adjourned to March 7 on Wednesday, after video evidence against him appeared to have been manipulated, defense lawyers told Mada Masr.

Dokki Misdemeanor Court sentenced Ali on September 25 to three months in prison over allegations that he made an inappropriate hand gesture after a court convicted him of involvement in protests against the Tiran and Sanafir island transfer agreement with Saudi Arabia.

Ali was convicted of committing a “dishonorable public act,” a charge that he claims is not constitutional, as Egyptian law only stipulates against dishonorable acts regarding tax evasion.

The hearing was adjourned pending the request for a representative from the Egyptian Radio and Television Union to be present in court. An independent editing and film committee had previously objected to a report submitted by the Television Union.

Ragia Omran, a member of Ali’s defence team, told Mada Masr that the court heard the testimonies of three technical experts from the Cinema Syndicate called by the defense to examine video evidence, but that experts from the Television Union were not present as requested by the court.

The experts watched a video submitted by the prosecution in support of the charges against Ali, in an attempt to prove he made the gesture at the State Council in January 2017. Through frame-by-frame analysis, they concluded the video had been manipulated, pointing to an additional finger on Ali’s left hand, Omran reported. Video footage from nearby locations to the site at which Ali allegedly made the gesture, including a gas station, museum and school, was not available to the court due to “erasure every 15 days,” she added.

Ali told the court he believes the complaint against him was made as a result of his intention to run for the presidency, according to Omran.

Ali’s candidacy in the upcoming elections is dependent on the verdict in this case, as a conviction could deprive him of participation, either as a candidate or voter.