In searching for coping mechanisms that didn’t require a chemical means of transportation, 2017 became the year I rediscovered the art of listening. Joy Division’s Ian Curtis once sang, “The past is now part of my future, the present is well out of hand.” I’d travel through these temporalities on any given day, only to find myself stuck in a time loop of anxiety, depression and the feeling I had done this all before. I spent much of the year in a place where time warped.

I learned to listen, not only to sound, but also to therapy, and to the future words of those we lost, like Mark Fischer in his passing this year. His book Ghosts of My Life has become an inspiring literary and musical companion to my revolving depression. Meanwhile, revisiting living authors’ texts, like Haytham al-Wardani’s “How to Disappear,” and Francis McKee’s “How to Really Know What’s Happening” in the series by Mophradat, presented me with wonderfully rhythmic and speculative thought experiments and exercises.

Musically, this was the year of Arabic female singer songwriter surrealists, who emerged like Dali drawn figures, lifting me with their frothing vocal lines, electric ouds and dripping noise. Highlights came with Maryam Saleh’s vocal presence paired with Maurice Louca and Tamer Abu Ghazaleh on “Lekhfa,” released by Mostakell in September. As I wrote in my review for the Wire magazine, Lekhfa feels like a portal into a fictional universe, one that functions through dream logic, irony and eerie captivation. It had a way of grasping me by my weirdest emotions, while inviting me into the dystopic and exhilarating new world the album shapes. It’s the grouping of this cacophonous — albeit rhythmic — sound, driven by layered vocals, beat loops, synths and slide guitar, with the mizmar, buzuq and oud, alongside poet Mido Zoheir’s haunting lyrics that gripped me. Zoheir’s themes pan around painfully alluring images along the edges of isolation, lust, loss, melancholy and escape. My personal favorites include the eerie, “Mathaf Fonoun El Ghesh” and “Teskar Tebki.” The latter kicks off with familiar polyrhythms, giving the illusion of a quintessential Egyptian dance track with tablas, handclaps and finger cymbals. But as the lyrics enter, you become aware of the complex paradox of the song’s rhythmic essence and its belligerent, pained poetry when hearing the multilayered vocals of Saleh and Ghazaleh singing, “You whose tears fall like bricks// In your hear, a branch still blooms.”

In November, there was Nadah El Shazly’s debut album “Ahwar,” on Khyam Allami’s Nawa Recordings label.  With themes traveling across loss, time and memory, I found the album to be cathartic, intense, and refreshingly original. It was exactly the sort of bizarre and beautiful antidote to boredom I needed throughout the year, both as a recording and live performance. As I wrote in my review in the Wire, El Shazly’s debut is a “sonic marshland with lyrics and instrumentals that shape-shifted loss into possibility.” The rich and complex album prompted in me semi-lucid visions of the mythical imagery, the ecstatic and the weird, through layered, multi-instrumental, off-kilter compositions, juxtaposed against her enigmatic Arabic prose. 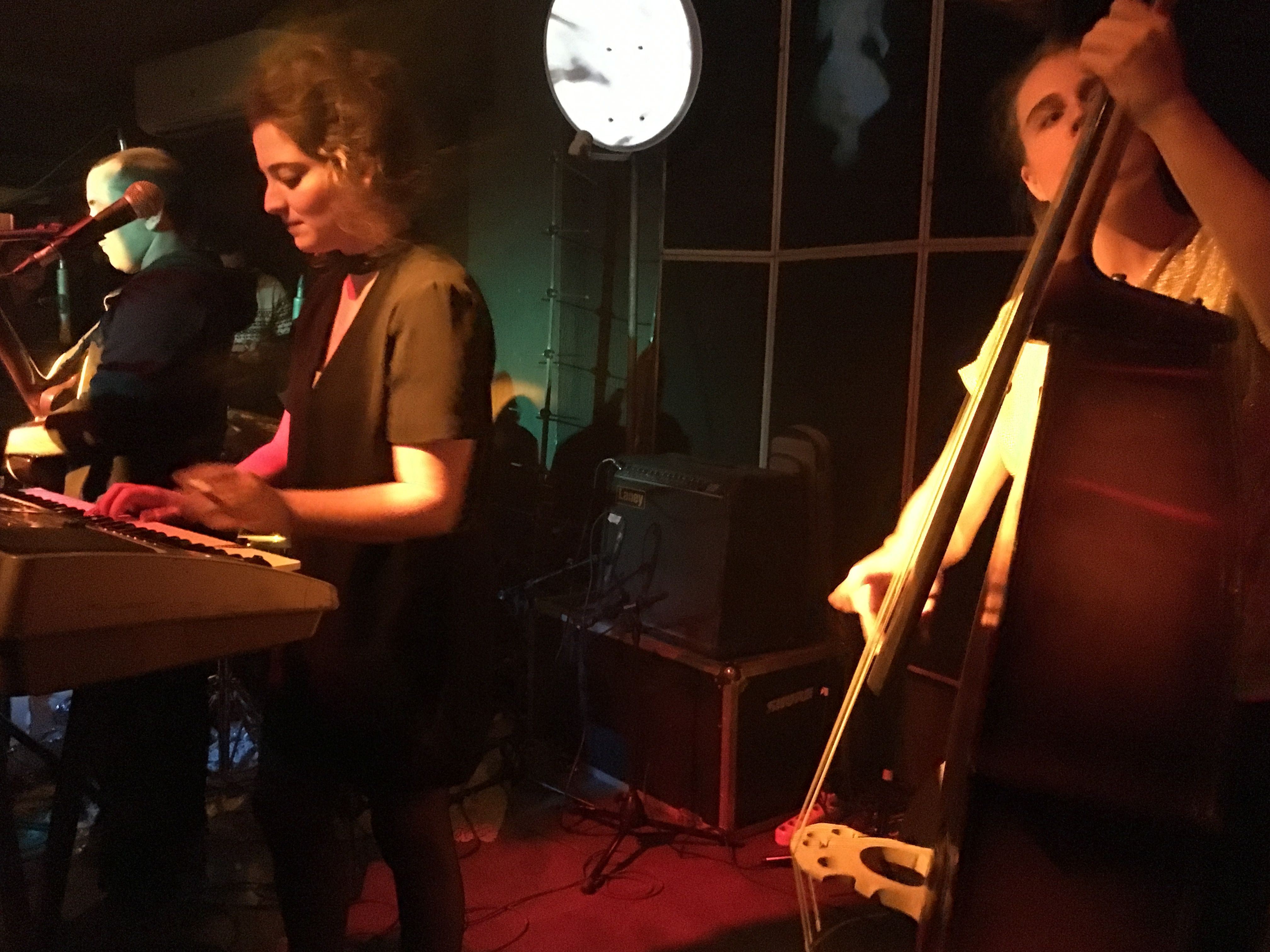 Later that month, I encountered Lebanese singer/songwriter Youmna Saba in Beirut’s Metro Al Madina. The seated, cabaret performance setting communicated her set in a way one rarely gets to experience in Cairo, with the intimately-sized audience quiet and eager to listen to an experimental solo artist. Performing songs from “Arb’een” (40), self-released in June 2017, the tracks’ fragmented narrative structures communicate the artist’s ideas around “alternative readings of time and continuity,” set to electric oud lines, pedal driven noise and a vocal grain that does what so many of us rely on music to do: teleport you anywhere but here.

In a different yet equally powerful way, the Porest “hate-pop” show at Cairo Jazz Club a few weeks ago did something very strange to me. I experienced a sort of revelation/non-revelation moment that seemed to blanket every performance in Cairo I had seen up until then. A performance project by Iraqi-American artist Mark Girgis, the show combined theater, comedy (Alan Bishop as “Lester”) and synth-laden music sketches that had me feeling as though I was part of some eerie and sardonic simulation of a performance. It was simultaneously weird and awesome. In 2016, Porest released the album “Modern Journal of Popular Savagery,” on Cairo-Algerian based label Nashazphone, but I didn’t quite get the impact of what Girgis was doing until I heard him perform live. 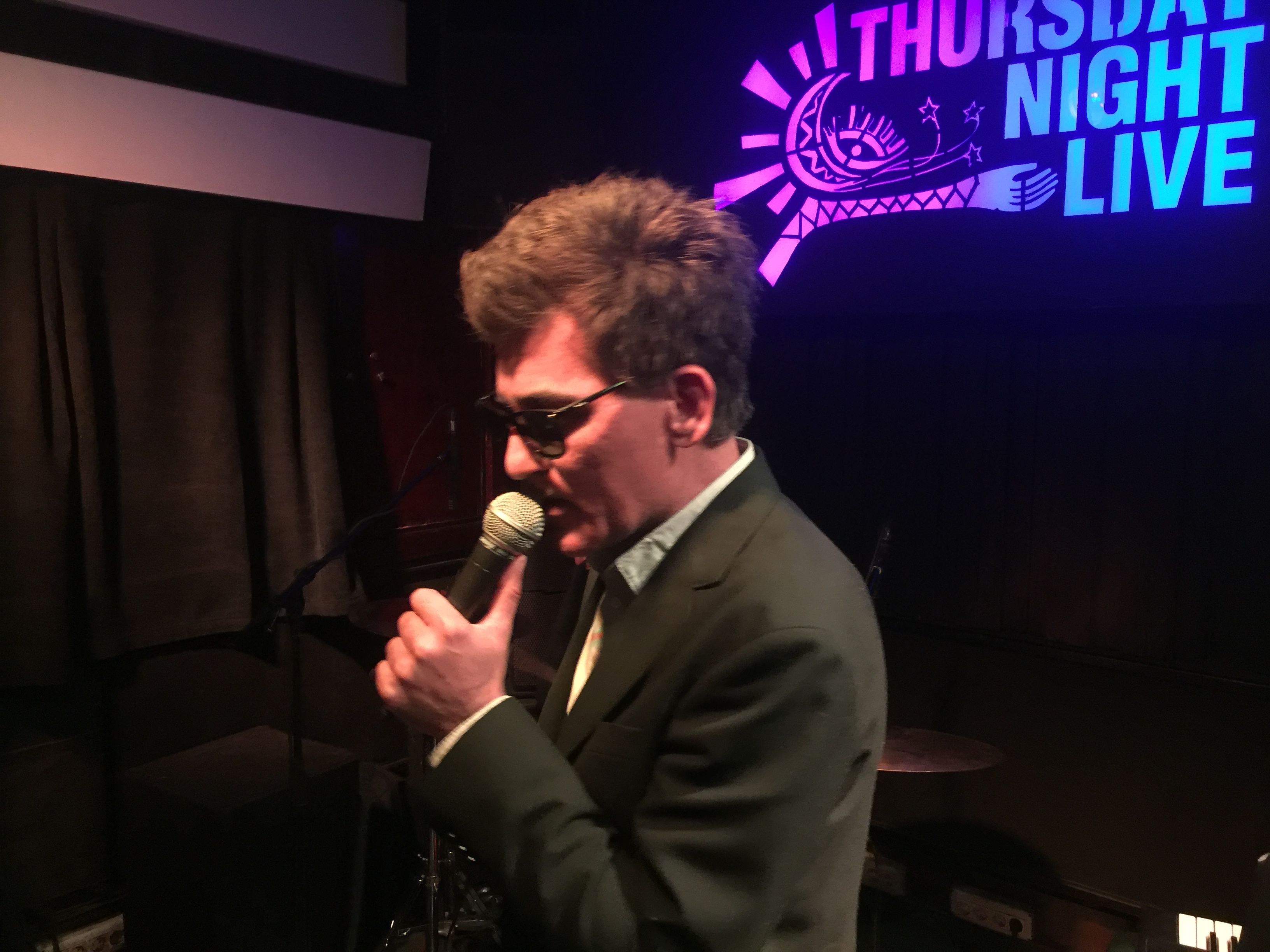 Dipping more into the electronic and urban genres, 2017 wasn’t a terrible year for dance music from Cairo. Islam Chipsy is still globally representing the electro-shaabi and mahraganat, but there are also some fresh faces on the local scene. Chief among them are rap duo S3ka3on and Andro El Hawy via 100Copies label, a keyboardist who has recorded and released dance tracks with mahraganat DJ’s and MC’s like Soska and Fifty.

Meanwhile, the left field dance music genres, including industrial, to UK garage, breaks, techno, and so on, had a lot to offer this year in Cairo. Exciting things are coming out through the event collaborations between the VENT team and DJ/producers Amr Allamy, A7ba El Jelly, ONSY and Maged AbdelMessih. VENT also successfully pulled off Cairo’s first Boiler Room session, with a live set by Islam Chipsy and DJ sets by Zuli, Asem Tag, Bosaina and 1127, which you can listen to here. In IDM, more abstract productions from Cairo, Rami Abadir and ONSY teamed up to release some dripping, gargling tracks under the moniker ON4B including “DotDotDotOneee.” Amr Allamy on the other hand seems to have figured out a way to clone himself, creating offshoots of different performance and recording projects. I recommend checking out his spectrum of productions on SoundCloud at @2anba2, @clr-door, @torkhyalshareef, @feryaldawa, @kharteet, @c31aa-s39xx and @khareg-al-tas.

This summer saw a spotlight moment with the release of Ahmed Ghazoly’s (ZULI) sophomore EP “Numbers” on Lee Gamble’s UIQ label. I interviewed Zuli for the Wire magazine ahead of the album release, where I learned about his “sha2laba kick,” a menacing, looping kick drum that we meet in the album’s opening track “BOW!.” While his previous album Bionic Ahmed was defined by its minimalistic aesthetic, made up of downtempo, granular techno and sound design, “Numbers” announced itself as a forceful, accelerated follow up, reminding us of Zuli’s temporal versatility. Whereas Bionic Ahmed was recorded largely in a bedroom, solitary setting, four out of the six tracks on “Numbers” were originally live tracks, performed in a club environment throughout his last tour in Europe. Whether in his albums or a live setting, it is in Zuli’s breakdowns that something very odd happens to me, take “BOW!” again, there’s something about how he slows down the breakdown to such a fragment of its speed that gives this surrealist, sci-fi filter over everything. Meanwhile, many of the sounds featured on both albums are captured through his Tascom field recorded — the creaking of his parent’s front door — warped and manipulated beyond recognition to create something as godly as a beat and its breakdown.

In retrospect, there seems to be a common thread through “Numbers,” “Lekhfa,” “Ahwar,” and other works mentioned above — this underlying surrealist tone of warped, fragmented narratives, dripping synth lines, bubbling beats, coiling in bassy marshlands. Or maybe that is just the lens that time traveling through 2017 filtered things through, “I lose memory/I lift the future and walk beneath it/To drown in a sea of the saliva of lunatics,” on “Afqid Adh-Dhakira” by Nadah El Shazly.

Visit our Soundcloud for a complete playlist of 2017 music from the MENA region.

AD
You Might Have Missed
What we talk about when we talk about trees
Carbon Colonies & A Green New Deal
Where do old lesbians go to die?
Mugamma revisited: Reimagining the building and the square
AD
Maha ElNabawi
89 articles on Mada

Topics
Related
2017 year enders
What have we done with culture?
Yasmine Zohdi | A collective practice review of Mada’s culture section in 2017
music
Yasmine Hamdan’s Al-Jamilat: An exploratory transitional record
Tugrul Mende | It seems to have a hard time deciding on its direction, but Tugrul Mende is excited to see what comes
music
Music industry conversations: Sarah El Miniawy
Maha ElNabawi | In a new series, Maha ElNabawi speaks to music professionals about the term “industry”.
music festivals
Masafat Cairo: Within striking distance of larger musical aspirations?
Habiba Effat | On aiming beyond musicians’ exposure and learning from the choices of our predecessors.