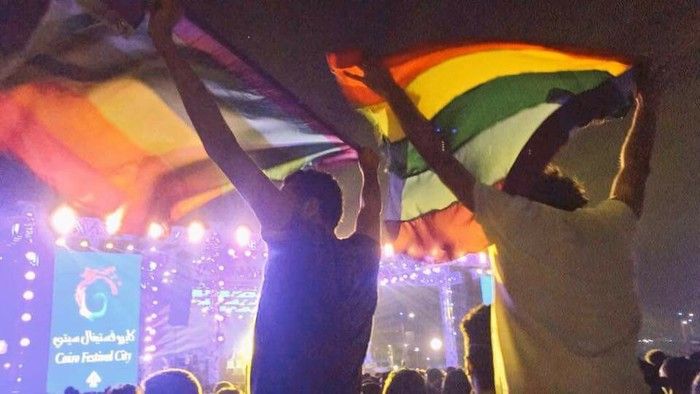 Giza Criminal Court released Sara Hegazy and Ahmed Alaa on Tuesday on LE1,000 bail each, pending further investigations into their alleged involvement in raising a rainbow flag in support of LGBTQ rights at a concert in Cairo, according to the Association for Freedom of Thought and Expression (AFTE).

Hegazy and Alaa were arrested on October 1, 2017, two weeks after a rainbow flag was raised during a performance by Lebanese band Mashrou’ Leila at a concert in Cairo, sparking a spate of arrests targeting people perceived to be LGBTQ, or those supportive of the LGBTQ community.

Hegazy and Alaa were charged with joining an outlawed group with the aim of “disrupting societal cohesion” and “inciting debauchery.”

Following the concert, the police launched a nationwide security crackdown in Egypt that led to the arrest of at least 75 people, according to a report released by the Egyptian Initiative for Personal Rights on November 22 of last year.

The crackdown is a violent escalation in the state’s longstanding persecution of the LGBTQ community in Egypt. While there is no legal article condemning homosexuality in Egypt, LGBTQ individuals are often tried according to anti-prostitution and debauchery laws.

A few days after the arrest of Hegazy and Alaa, the official Mashrou’ Leila Facebook page condemned the arrest campaign in a statement, saying, “This crackdown is by no means separable from the suffocating atmosphere of fear and abuse experienced by all Egyptians on a daily basis, regardless of their sexual orientations.”

Topics
Related
LGBTQ crackdown
LGBTQ crackdowns, civil society and social change: A video conversation
Naira Antoun | Responses to seminal moments of state violence against LGBTQ individuals in Egypt
Egyptian Initiative for Personal Rights
EIPR: Authorities have systematically entrapped LGBTQ individuals online since 2015
Egyptian authorities have pursued systematic efforts to entrap individuals for their sexuality on dating
LGBTQ crackdown
Symbols, perversity and the enemy within
Zizi | The freedom of those rounded up must be defended, but the fight is bigger than this
LGBTQ
Rainbow flag at gig sparks media storm of hostility
Mostafa Mohie | Rainbow flag at Mashrou' Leila's Cairo gig reveals deep-seated vitriol in Egyptian media