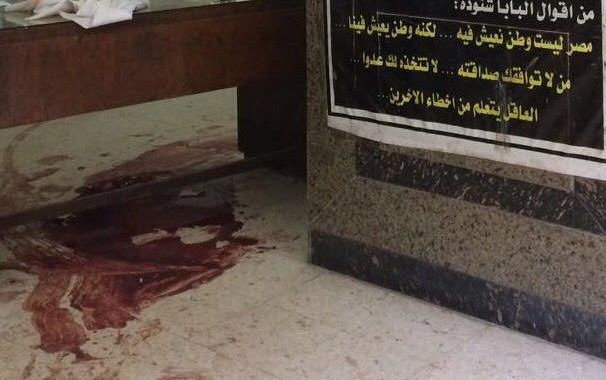 Inside the church after the attack - Courtesy: Ibrahim Ezzat
By
Karoline Kamel

Copts who frequent the Helwan church of Mar Mina the Wonderworker and Pope Kirollos VI of Alexandria, as well as residents of the neighboring area, will not soon forget the 15 minutes they lived during the Friday morning attack that left eight Copts and one policeman dead.

“A choir from Shubra was here for a children’s concert,” Mina (not his real name), a deacon at the church of Mar Mina, tells Mada Masr. He recounts the details of the attack that he watched through a window on an upper floor of the church, while children present in the building were directed to take cover from gunshots inside the altar.

“Suddenly, we heard loud bangs at the church gate downstairs. The bangs continued for a while so I headed to a window to see what was going on. I saw the terrorist; he looked up and started shooting at the windows too. I was so frightened that I shut the window and moved away from it.”

“The old man who works at the coffin shop across from the church, Eid Morqus, snuck in to hide behind his coffins when he saw the terrorist. The terrorist spotted him though, and followed him in and shot him in the head several times. That was the harshest thing I had to see,” the church deacon recounts.

Mina called the emergency line, but no one answered. He then called friends who were not at the church and asked them to go get help at the nearby police department. When they arrived to report the shooting, commissioned officers told them that a force was already at the scene. But nobody was there for over half an hour, according to Mina, during which the terrorist fired shots at the church and attempted to find a way to get inside.

A Health Ministry spokesperson stated that the death toll has reached nine people – including the policeman who was posted outside the church – and that five others were injured.

“When we captured him, we found several hand grenades and two magazines in the pocket of his jacket. He came prepared to bomb the church, not just shoot at it,” an eyewitness says, speaking to Mada Masr from inside the church, where a large portrait of Pope Kirollos VI of Alexandria sits, pierced by several bullets.

Next to it, a Nativity scene is installed by the church, part of its annual tradition in preparation for Christmas and New Year’s Eve, embodying the Christian narrative of the birth of Jesus: The Holy Family, the Three Wise Men and other visitors.

The eyewitness account was corroborated by others who witnessed the citizen arrest the gunman, after which he was turned in to the police.

The church’s CCTV footage shows a civilian shooting at the gunman from a distance to stop him. The man, identified as Abdallah Ahmed, a resident of the area, was present when the attack started, and he managed to draw the gunman away from the church and injure him.

“I heard sounds and I went out to see what was going on,” he says. “From afar, I could see a man with a bag and a firearm on his shoulder. I thought he was with the police, at first. But then he shot the policeman. He shot at two women and a little girl. Then he entered the church’s yard and opened fire at the building. Some people rallied to shut the door, but it was made of glass so he shot at them and managed to kill them. When he turned around, I was grabbing the little girl to hide her behind a car. He saw me and shot at me.”

“I hid behind a car myself,” Ahmed continues. “He came looking for me. When he couldn’t find me, he headed back to the church and started shooting at the windows. I snuck up on him and threw a rock at him, hitting him in the head; he fell to the ground. I seized the moment and ran toward the church. I saw the firearm that belonged to the policeman he had killed. I picked it up and cocked it. The husband of a woman who was killed was standing next to me. I shot at the gunman from a far. When we ran out of ammunition, he headed toward us. The dead woman’s husband and I ran for cover. The gunman fired a couple of shots, then left. He was walking the alleys, trying to find another way in [to the church]. We loaded the wounded and the bodies onto our car and transferred them to the Nasr Hospital. Two women were transferred in another car.”

According to Ahmed, the gunman was roaming freely for over 15 minutes. He does not know how he was arrested. A while after he exited the area, Ahmed heard gunshots fired at the church, but could not identify the source. His account suggests that other gunmen were involved in the attack, which is in line with eyewitness testimonies claiming that the first gunman arrived on a motorcycle whose driver drove away.

The Mar Mina church parishioners were enraged by the rumor that the firearms held by the church’s security personnel were not loaded and that only one clip of blanks was available to them.

“Forget about protecting Christians. They need live ammunition to protect themselves, don’t they?” says Mina the deacon. In an attempt to diffuse their rage, the parishioners were told that the first three rounds in a magazine are usually blanks, while the shots that follow are live.

“Every time, convoys of tanks with high-ranking officers show up well after the fact and tell us how they aborted the terrorist attack,” says Mina. “This is what they call aborting the attacks? How about preventing them from happening?”

A statement released by the Interior Ministry on Friday evening identified the gunman as 33-year-old Ibrahim Ismail Ismail Mostafa. According to the statement, Mostafa is a wanted terrorist who had commanded an attack on a Helwan Police Department van back in 2016 and has carried out several other terrorist attacks on his own, the latest of which left three Beni Suef toll booth clerks dead on Thursday.

On Friday evening, the Islamic State claimed responsibility for the attack on the church on their social media channels.

AD
You Might Have Missed
Where do old lesbians go to die?
Carbon Colonies & A Green New Deal
What we talk about when we talk about trees
Mugamma revisited: Reimagining the building and the square
AD
Karoline Kamel
25 articles on Mada

Topics
Related
attacks on churches
Behind the attack on Prince Tadros Church: The sound of a bell or the absence of law?
Karoline Kamel | What was behind the attack on a house that had been used as a place of worship by Copts in Giza?
Copt-Muslim relations
A daughter marries outside the faith
Mariam Ibrahim | Interreligious marriages in Egypt is a constant negotiation of obligations and identities
attacks on Copts
Murdered priest exposes hidden aspects of sectarianism in popular Cairo neighborhood
Karoline Kamel | Father Samaan Shehata tried to propel himself forward with all the strength he could summon, after a
coptic christians
Coptic martyrdom in the age of the security state
Mariam Ibrahim | Is a religious narrative that frames the killing of Copts as God's will at odds with mounting resistance