On December 12, 2017, Twitter shut down the account of prominent Egyptian cyberactivist Wael Abbas (@waelabbas), along with subsequent accounts he set up. He received a message from Twitter notifying him of the action, saying, “Your account has been suspended and will not be restored, because it was found to be violating Twitter’s Terms of Service, specifically the Twitter Rules against hateful conduct.”

Abbas is well known for his work on exposing corruption, human rights violations and challenging social norms online. Just before his account was closed, he criticized Alaa Mubarak, ousted president Hosni Mubarak’s son, on Twitter, after Alaa accused the January 25 revolution of being an Israeli conspiracy.

The closing of Abbas’ account by Twitter is believed to be in response to a large wave of violation reports by accounts linked to supporters of Mubarak’s regime. Such mass reporting by electronic committees — individuals mobilized by a single entity or group — is easy to spot, due to the sharing of identical posts and violation reports by several Twitter users, some of whom had Mubarak’s photo as their cover image. 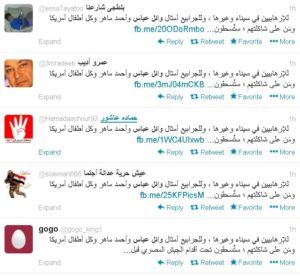 The work of these electronic committees is not a secret. President Abdel Fattah al-Sisi admitted to the use of such strategies in an April 2016 speech. “With just two electronic ‘troops,’ I can totally close the internet and turn it into closed network and have it be be the only source of information for journalists,” he said.

The mild reaction of the state-owned Al-Ahram newspaper to the suspension of Abbas’ account indicates the general negative disposition of the regime toward online activists.

Abbas is a renowned blogger, known for his posts on Misr Digital exposing human rights violations committed by Egyptian security forces. He played a key role in spreading a video in 2007 showing two police officers assaulting microbus driver Emad al-Kabir. The officers in the video were eventually convicted and sentenced to three years in prison, partly due to the awareness created by Abbas and other bloggers. This was a landmark case that sparked a wave of cyberactivism, specifically against torture, and contributed to the establishing of an online solidarity and advocacy group “Egyptians Against Torture.”

Abbas documented his personal experiences and aspects of daily life in Tahrir Square during the 18-day uprising in 2011, in addition to details of the arrests and assault of protesters by security forces. He took a strong stance against the intervention of Sisi in 2013, warning early on about the return of the military to daily life. He is also known for engaging brazenly with socio-politically sensitive issues in Egypt, such as the death penalty and homosexuality.

Twitter’s protocol has systems in place for the reporting of vulgar or offensive language, which were easily used against Abbas. When large numbers of users report such alleged abuse, Twitter is obliged to close the account, often before fully investigating the content.

Abbas often writes in the vernacular to reach a large audience, converting the language of human rights and politics into a discourse people can understand and relate to. It is essential that media platforms like Twitter are able to distinguish between such language, which is often highly opinionated, and intentionally abusive discourse.

This tactic of mass reporting was also used to suspend the Twitter account of Reuters journalist Amina Ismail on December 13. Although, it was reinstated a couple of days later.

The closing or suspending of the accounts of activists seeking social and political change adds to the repression and suffering they are already experiencing under authoritarian regimes. Social media sites should apply more discerning methods for reporting abuses, rather than automated responses to mass reporting. They should be more aware of the complicated political situation in countries like Egypt, where social media has played a key role in enabling activists to organize and spread information, and therefore is often targeted by regime loyalists.

AD
You Might Have Missed
Where do old lesbians go to die?
What we talk about when we talk about trees
Mugamma revisited: Reimagining the building and the square
Carbon Colonies & A Green New Deal
AD
Sherif Azer
6 articles on Mada