Behind the attack on Prince Tadros Church: The sound of a bell or the absence of law? 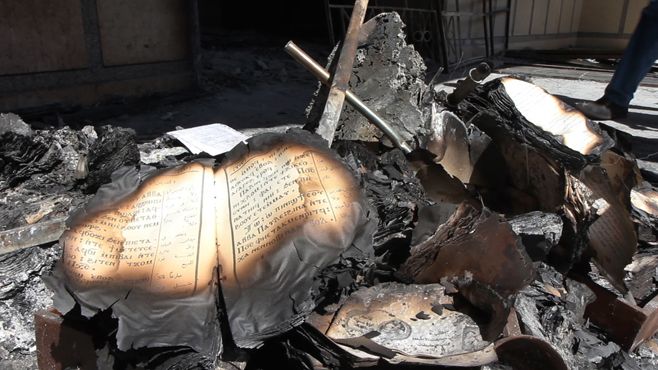 A house that had been used as a place of worship by Christians in the village of Waslin, Atfieh in Giza was attacked and three worshippers assaulted on Friday. The Giza prosecution continues its investigations with 15 defendants accused of attacking the church, while Eid Attiya, the owner of the land on which the makeshift church was built was detained on Sunday for four days pending investigations into charges of building without a license, according to Ishak Ibrahim, religious freedoms researcher at the Egyptian Initiative for Personal Rights.

The attackers viewed the place as a project to build a church and a project that had to be stopped. However, the Atfieh diocese said in a statement on Friday that prayers have been held here since 2001, and that after a long-awaited law concerning the building and restoration of churches was issued in September of last year, the diocese submitted a request to obtain a permit for the church.

The diocese lawyer Hany Samir told Mada Masr that the church was built in 2001 on a piece of land owned by Eid, which he then sold to the Atfieh diocese with a contract signed by the two parties in 2014. The prosecution confirmed the validity of the signatures on the contract.
On Saturday, the prosecution interrogated six individuals suspected of attacking the church, accusing them of illegal gathering, thuggery, destruction of private property, beating the victims and entering an inhabited building with the aim of committing a crime, in addition to abusing religion to incite strife, according to Al Masry Al Youm newspaper. South Giza prosecution ordered the six men to four days detention pending investigations, according to privately owned Al-Shorouk newspaper.

We heard a bell

In its statement describing the incident, the Atfieh diocese said that “hundreds of individuals gathered in front of the building after the Friday prayers, chanting hostile chants, demanding the demolition of the church, then raiding the place, destroying its contents, and beating the Christians present there.”

In a television interview with the MEsat channel on Saturday, the Bishop of Atfieh, Anba Zusima, said that prayers have been conducted regularly in the church since its establishment in 2001, adding that there are about 350 Christian families in the village. He went on to say that mass has been held every Saturday at the church for the past year, attended by 200 to 500 people.

The diocese submitted the papers of the church to legalize its situation after the adoption of the law on building churches in late 2016.

Ahmed Emara, a teacher at an Al-Azhar-affiliated religious institute in Wasalin, denies that the building was a church where prayers had been held since 2001. In a telephone conversation with Mada Masr, he said, “This talk is absolutely not true. True, there is a priest who comes to them every Saturday, but this has only been going on for one year. We know that it is not a church, but an association distributing goods to the poor.”

“Also, six months ago we heard that this house hosts a church, and when we asked the owner of the building, he told us that he had built it for his children when they get married,” he added.

Emara, who owns a plot of land adjacent to the church, objects to the building of a church “in our midst,” and in a residential space, saying “I wish they had tried to build it somewhere more remote, that would have been acceptable. But to build it in a populated area where there is a large mosque and an Al-Azhar Institute, would be an insult to the people living here.”

“The nearest church is a kilometer away,” Anba Zusima said in his televised remarks “and the people of the village of Waslin would have to walk this distance to be able to pray. There is no transportation available for them except the toktok, which means people would have to pay LE10 to get there, plus another LE10 to come back. This is quite a sum for them to pay, and it would amount to about LE100 for a family to go and pray.”

According to eyewitness accounts, local Muslim anger was triggered by news that the church had installed a bell. Anba Zusima, however, said that the two-story building was without a tower and there is no place to install a bell. Emara insisted in his conversation with Mada Masr that a few days before the incident, people heard the sound of a church bell.

Ibrahim, religious freedoms researcher at EIPR, says that what happened in Atfieh has become increasingly common, Muslim residents of villages attack places that had been used as Christian places of worship when they feel that they will be granted a permit, in accordance with the new church building law. He notes that there have been 22 attacks on places dedicated to Christian prayer since church-building law was issued in September last year. Ibrahim added that since the law was passed, “places of prayer” have been closed indefinitely by authorities under the pretext that no decision was taken regarding its legal registration.

No reconciliation session, yet

Emara relates that after the sound of a bell was heard, people began to circulate calls on Facebook and text messages to rally after Friday prayers and demonstrate in front of the church building, pointing out that “security had approved the gathering.”

Eid Abdel Shahid, a Christian resident of the village, told Mada Masr that they had informed security forces of the calls for demonstrations in front of the church about a week ago, adding “Members of State Security, the police and the mayor’s guards were posted in front of the church. However, five minutes before the end of the Friday prayer, they all withdrew, leaving the church to the crowd, and the church cameras have recorded all this.”

Emara recalls the events of the day. “People came out from Friday prayers and security knew they were headed to the church. On their way there, they invited everyone they met to join them: tuk tuk drivers, people coming back from their land. And by 11pm we were surprised to find security arresting some of the people who were there —maybe they arrested the young people who acted recklessly and did some acts of vandalism.”

Anba Zusima also confirmed that security forces were aware of the calls to gather and mobilize in front of the church. He said that the ambulance was unable to reach the church to transfer the three people wounded in the attack, until security dispersed the crowd.

Ramy Kamel, head of the Maspero Youth Association for Development, told Mada Masr, “MP Abdel Wahab Khalil proposed holding an informal reconciliation session where Christians give up their legal claims, but the church refused. So the MP turned up the pressure, and even said that the Muslims will have a more violent reaction if one of their own is detained.”

Samir told Mada Masr that it is possible that the Copts will eventually accept the reconciliation proposal and give up their legal claim because of the pressure they are facing.

Emara thinks the probable reconciliation will still not be the end of the problem. He says, “Even if a reconciliation is reached, the residents will never accept that a church is built in their village.”

AD
You Might Have Missed
Where do old lesbians go to die?
Mugamma revisited: Reimagining the building and the square
What we talk about when we talk about trees
Carbon Colonies & A Green New Deal
AD
Karoline Kamel
25 articles on Mada

Topics
Related
Copt-Muslim relations
A daughter marries outside the faith
Mariam Ibrahim | Interreligious marriages in Egypt is a constant negotiation of obligations and identities
attacks on Copts
Murdered priest exposes hidden aspects of sectarianism in popular Cairo neighborhood
Karoline Kamel | Father Samaan Shehata tried to propel himself forward with all the strength he could summon, after a
discrimination
Copts and Egypt’s national game: We’ll call you back later
Mai Shams El-Din | The absence of professional level Christian players can be traced to discrimination that begins young
coptic christians
Coptic martyrdom in the age of the security state
Mariam Ibrahim | Is a religious narrative that frames the killing of Copts as God's will at odds with mounting resistance