Cigarettes are the most recent target for tax hikes, but consumption is not expected to be affected

A look at previous data shows that cigarette consumption has not been affected by price hikes in the past.

The amendments are expected to increase tax revenues by around LE8 billion, Ahmed Kouchouk, deputy finance minister for fiscal policies, tells Mada Masr. The current state budget, however, projects that revenues from the value-added tax on cigarettes and tobacco will increase by up to LE13 billion, bringing the total sum to LE55 billion.

The discrepancy in projected figures is not necessarily an indication of another hike in the 2017/18 fiscal year, but is more likely a result of the Finance Ministry’s tendency to make conservative estimates, according to Reham al-Dessouki, senior economist at Dubai-based investment bank Arqaam Capital.

“The hike in the value-added tax on cigarettes and tobacco is significant only in light of its being part of a wider tax package,” Dessouki tells Mada Masr. “However, the projected LE8 billion rise in tax revenue is limited when compared to the overall financing needs of the budget, although the amount collected is not insignificant for one collection source.”

Despite the tax hikes, the privately owned Al-Shorouk newspaper cited Mohamed Othman Haroun, chairperson of the Eastern Company — an Egyptian publicly listed company that has a monopoly on cigarette production in Egypt — as saying that the company expects to see sales grow and to expand its operations.

Since 2014, Egypt has embarked on an economic program that aims to clamp down on a growing budget deficit by cutting subsidies and introducing new taxes, such as the value-added tax.

Data records of cigarettes consumption from past years show the resilience of cigarette sales in the face of the previous three tax hikes.

Eastern Company has been able to increase its production in spite of the frequent hike in taxes due to the inelasticity of demand for cigarettes, according to an analysis note released by Arqaam Capital on November 22.

“The revisions in retail prices should more than offset the increase in taxes,” according to an update added on November 26. “This should allow Eastern to fully pass on the headline tax impact, and furthermore to extract margin benefits.”

The inelastic demand for cigarettes has allowed the monopoly producer to increase its retail prices by more than 80 percent since 2014 without any significant impact on sales and production, according to Arqaam Capital.

In July 2014, the flat tax rate on cigarettes and tobacco products was replaced by the VAT. 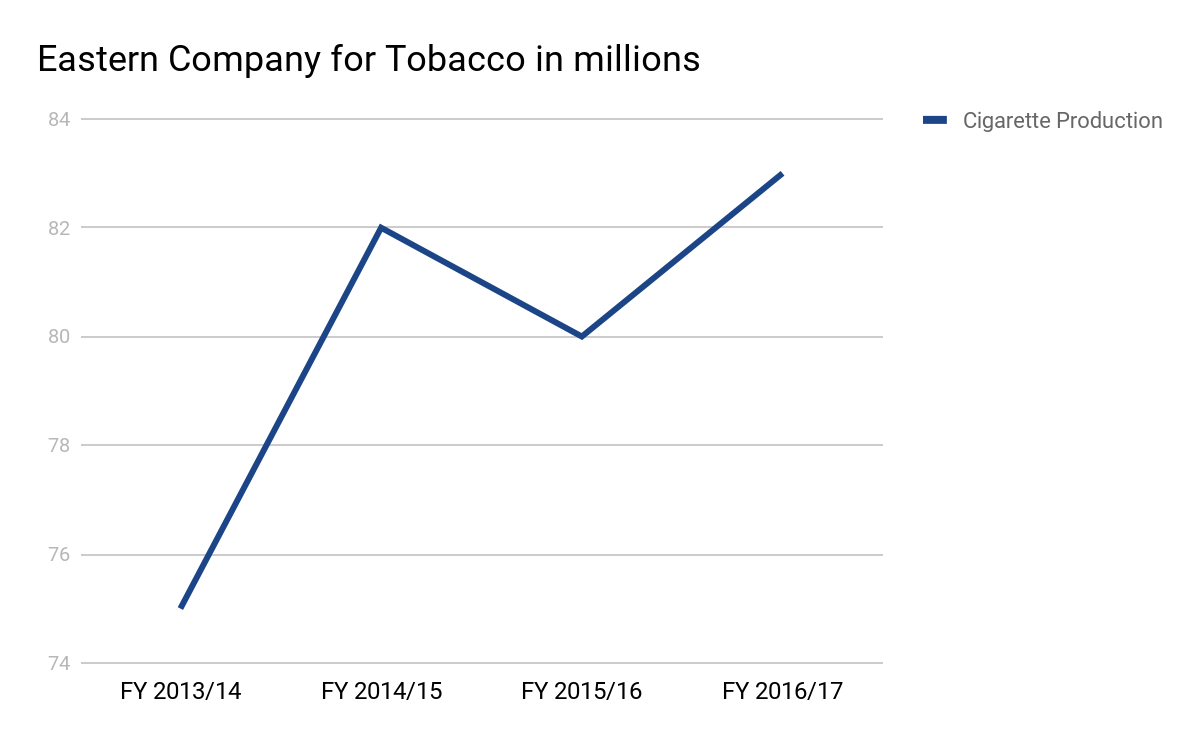 “The business is able to do so due to its presence in multiple segments of the tobacco market; buyers are retained even as they ‘down-trade’ to lower quality brands with the EC product suite,” reads the Arqaam Capital analysis note.

A sign of its accelerating profit increases, Eastern Company announced a 114 percent surge in the first quarter of the current fiscal year, recording net profits of around LE1 billion compared to LE427 million in the same period one year earlier.

Listed in the Egyptian Stock Exchange since 1995, Eastern Company produces local cigarettes such as Cleopatra, along with other brands for sale in the Egyptian market, in agreement with international tobacco manufacturers British American Tobacco and Philip Morris. Eastern Company has similar deals with Japanese Tobacco, Imperial Tobacco and Al-Mansour International Distribution Company for the licensed manufacture of cigarette products. On the day Parliament approved the amendments, Eastern Company’s share price closed at a 4.5 percent rise.

The stock re-rated 13 percent since the announcement, according to the Arqaam Capital note, on November 26.

Although the prices of cigarettes have been increased on several occasions in the past few years, this has brought about little change in consumption habits. The impact on inflation has also remained minimal, as cigarettes and tobacco products contribute a mere 2 percent to the overall Consumer Price Index basket, according to Arqaam Capital.

However, “the lowest income strata are affected the most by an increase in value-added tax on cigarettes and tobacco, as the costs constitute a higher portion of their income,” Dessouki says. 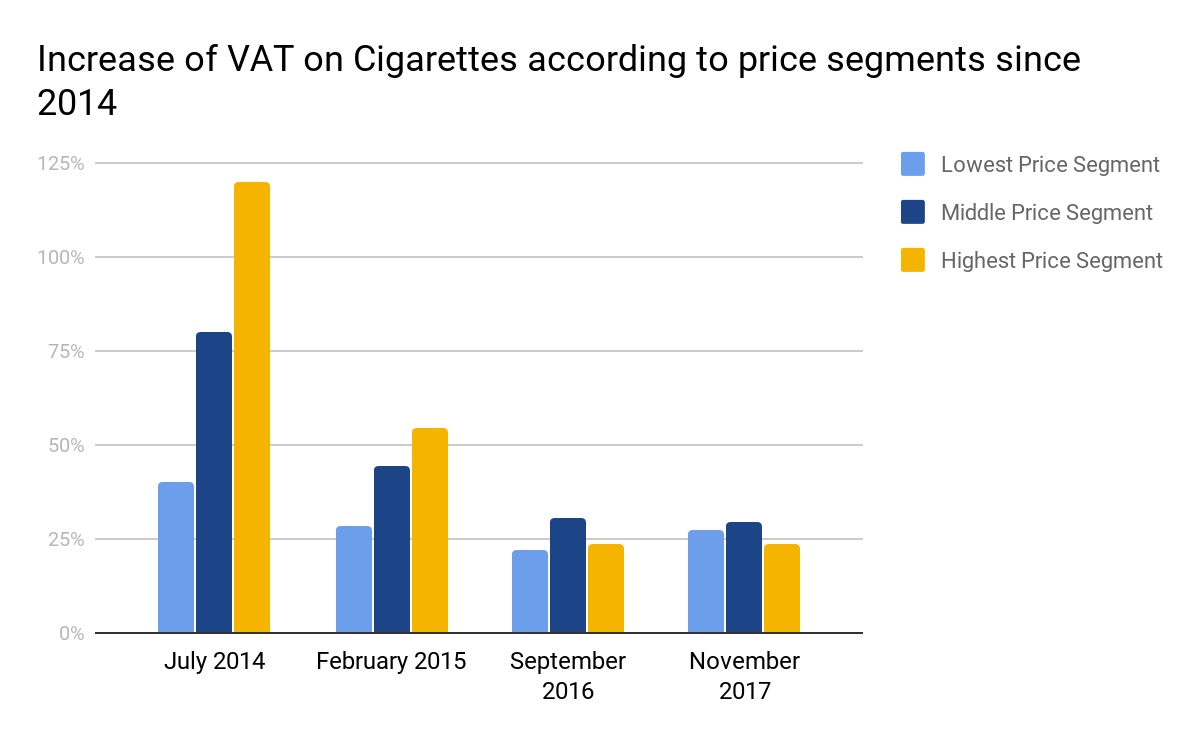 Ultimately, this tax hike “takes away from the political capital of government,” reads the note.

In response, the government indicated that revenues generated annually from the tobacco tax increase would finance the rolling out of Egypt’s recently passed universal health insurance law. However, the mechanisms through which this will be achieved remain unclear, as the budget is does not allocate each revenue type to a particular expenditure clause.

The universal health insurance law was passed on Monday amid ongoing controversy regarding its implications on accessibility to healthcare services. The law aims to unify the multiple health insurance schemes under one umbrella, to ensure they meet specific quality assurance standards. Coverage is expected to expand over the coming 13 years until it is universal for all Egyptians.

However, the law has raised the concerns of experts for several reasons — most notably, that it establishes a health insurance management system in which the private sector will play a pivotal role in planning and providing services, stoking fears that this may allow companies to take over the system and manage it in a way that favors their interests over the public’s.

AD
You Might Have Missed
Where do old lesbians go to die?
Carbon Colonies & A Green New Deal
What we talk about when we talk about trees
Mugamma revisited: Reimagining the building and the square
AD
Waad Ahmed
28 articles on Mada