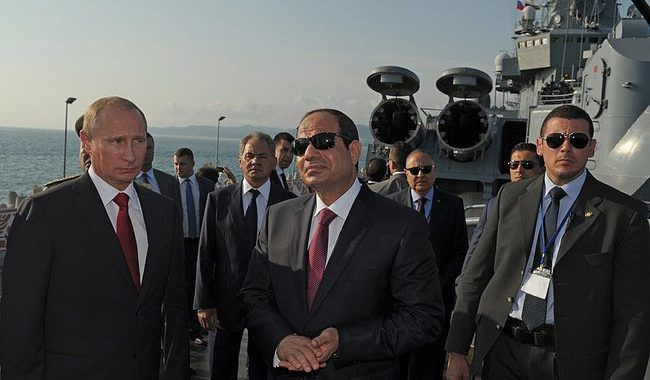 The launch of Egypt’s first nuclear plant project, in the city of Dabaa in the Matrouh Governorate, was announced by Russian President Vladimir Putin and President Abdel Fattah al-Sisi in a joint press conference in Cairo on Monday.

The deal signalling the launch of the project was signed by Alexei Likhachev, head of Russia’s state nuclear company Rosatom, and Egyptian Electricity and Renewable Energy Minister Mohamed Shaker the same day. Contracts stipulating its technical and financial details have not been signed, however.

According to a government source directly involved in the project, relevant government bodies held extensive discussions on the technical and financial details of the plant’s construction in order to finalize the contracts before Putin’s visit, which was announced only three days before his arrival.

The source, speaking to Mada Masr on condition of anonymity, said government and security bodies, as well as the State Council’s Legislative Committee, which reviews government contracts, have expressed several concerns about the deal’s technical details. The president’s office ignored these concerns in their enthusiasm for launching the project, the source said.

According to the source, the concerns all revolved around “the immensely loose wording of the contracts, which mean that in practice any ambiguously defined responsibilities will fall on Egypt and may have severe security and financial consequences.”

The government source listed several points of contention in the contracts. One of the most glaring issues concerns nuclear waste, as it is not explicitly specified how waste will be handled, which party is responsible for handling it, or who takes on the costs of treatment and disposal.

Moreover, the contracts do not state the Russian party’s responsibility for any potential cracks in the containment building or radiation leaks, which implies that this would be the responsibility of the Egyptian state.

Another issue, according to the source, is that the wording does not clearly define instances where Egypt would have the right to appeal to international arbitration if the Egyptian party believes the Russian party has violated the terms. Yet the contracts give the Russian party an abundance of rights pertaining to Egypt’s construction, security and funding obligations.

Interest rates are said to be another sticking point, as a US$25 billion loan Egypt is to receive from Russia to fund the project has an extremely high late payment rate and the security pledges demanded by Russia are very costly.

Egypt has also agreed to allow Russia to undertake construction works either directly or via public or private Russian or foreign actors, giving it the liberty of signing agreements with such actors without consulting Egypt. Egypt is required to provide facilities for any agency or company that may reach an agreement with the Russian party, the source said.

Under the contracts, Egypt is responsible for securing the construction site as well as Russian workers and other workers from government or private agencies contracted by Russia, the source added. Meanwhile, in a separate agreement currently under discussion, Russia retains the right to revisit security-related terms under the supervision of a Russian security team.

Finally, the source said that once signed the contracts would also require Egypt to accept that Russia become the sole decider on what highly confidential information needs to be shared with the Egyptians based on its judgement. Egypt would also agree to limit circulation of such information within government agencies. Egyptian experts and technicians also forfeit the right to request technical details or demand to review studies.

Egypt acted fast in recent weeks to prepare for the anticipated signing of the project’s technical contracts. In an emergency general session on November 27, Parliament passed three pieces of related legislation drafted by the government: The law to establish the Executive Authority for Supervising Nuclear Electricity Generation and two amendments to the laws to establish the Nuclear Power Plants Authority and regulate nuclear and radioactive activities. The laws appeared in the Official Gazette on November 29.

At the start of the emergency general session, held shortly after the November 24 Rawda attack, Parliamentary Speaker Ali Abdel Aal said there was a pressing need to pass these bills quickly.

But Parliament is yet to ratify or discuss the Russian loan that is to fund the project, although the president signed the funding agreement in April 2016 and it was published in the Official Gazette the following month.

Despite these steps, the Kremlin’s Thursday statement, in which Putin’s Cairo visit was announced, notably omitted to mention signing the Dabaa contracts as part of the visit’s schedule. It said the agenda just included “strengthening the bilateral relationship in the political, trade, economic, energy and humanitarian fields” and “the stability and security of the Middle East and North Africa.”

Asked whether the cooperation on energy mentioned in the statement would include signing the Dabaa contracts, a Russian diplomatic source told Mada Masr, “We will see.”

An Egyptian diplomat, speaking on condition of anonymity, said that what finally made the visit possible was that “considerable progress was made over the past few weeks in several joint cooperation fields, not least of which was on the military front.”

The diplomat said some issues have been finalized and others remain under discussion, “but President Sisi was perfectly clear about wanting to strengthen [Egypt’s] relationship with Russia from the beginning. Some difficulties arose, but it seems that they are about to be resolved thanks to direct political support from both presidents.”

In Putin and Sisi’s joint press conference they also announced more ongoing negotiations, without final resolutions, on the planned Russian Industrial Zone in the Suez Canal Economic Zone and the expansion of military cooperation.

Russian Defense Minister Sergey Shoygu visited Cairo on November 29 and signed a direct initial agreement with Sisi to allow Russian military jets to use Egyptian bases. The provisions of that agreement were disclosed by Russia, while the only comment from Egyptian authorities was a statement from the president’s office that mentioned joint cooperation toward maintaining Arab countries’ security.

Another government official, who was directly involved in this matter before retiring a few years ago, confirms that several state agencies expressed “unmistakable” concerns regarding the costs of the nuclear power plant and the potential risks entailed, as well as the current need for it and Egypt’s ability to meet the requirements for more jumbo loans.

“There is a great deal of haste,” the official said. “What Egypt would gain from this is not clear, especially as Russian officials have repeatedly stated that signing these contracts is not a condition for restoring the flow of Russian tourists to Egypt.”

In Monday’s press conference, Putin said steps to restore direct flights from Russia to Egypt had been discussed and that Russia is ready to resume them, but a governmental protocol must be signed first.

Russian tourism in Egypt, a significant portion of foreign tourism in the country, was halted two years ago after a Russian plane crashed flying over Sinai in October 2015, killing everyone on board.

AD
You Might Have Missed
Mugamma revisited: Reimagining the building and the square
Where do old lesbians go to die?
What we talk about when we talk about trees
Carbon Colonies & A Green New Deal
AD
Asmahan Soliman
55 articles on Mada

Topics
Related
2018 presidential elections
A presidential race, anyone?
Asmahan Soliman | We map the possible candidates and Sisi's re-election plan for the 2018 presidential elections
nuclear power plant
Cause for celebration? From opposition to acceptance of the Dabaa nuclear power plant
Osman El Sharnoubi | While the state has secured Dabaa residents' approval, questions remain about the project's feasibility
foreign debt
Has Parliament been sidelined in Egypt’s loan-approval process?
Mohamed Hamama | With the $12 billion IMF loan, Parliament will not have approved approximately $40 billion in loans.
Dabaa
A gag order on Egypt’s nuclear power plant may not be legal
Beesan Kassab | A gag order imposed on reporting about Egypt’s nuclear plant project earlier this week is not based