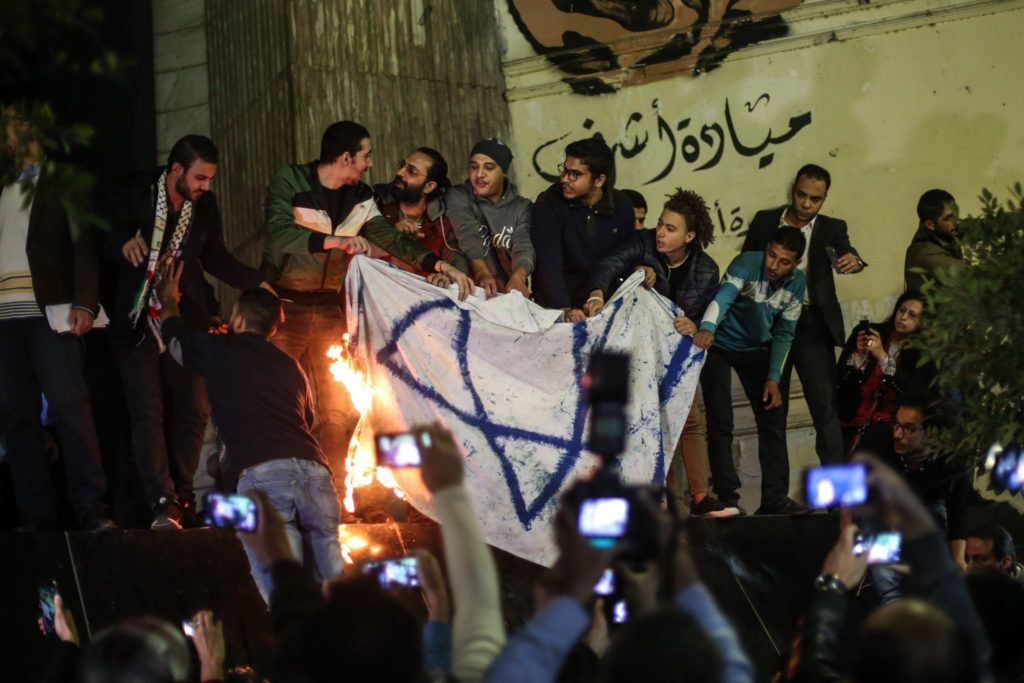 Ten people arrested near the protests in downtown Cairo on Thursday demonstrating against United States’ recent decision to recognize Jerusalem as the capital of Israel were released on bail on Sunday, and two journalists were detained, according to lawyers.

The Qasr al-Nil prosecution ordered the release of the 10 people, arrested near a Thursday protest at the Journalists Syndicate, on LE2,000 bail each. They are accused of illegal assembly, demonstrating without a permit and obstructing traffic, according to lawyer at the Egyptian Commission for Rights and Freedoms Mohamed Hanafi.

Hundreds of protesters also gathered near Al-Azhar Mosque in Cairo after Friday prayers in response to US President Donald Trump’s Wednesday announcement, chanting slogans against the decision and burning an Israeli flag.

According to lawyer at the Arab Network for Human Rights Information Amr Mohamed, two journalists arrested while covering the Thursday protest have also been remanded in pretrial detention by the Supreme State Security Prosecution for 15 days, pending investigations.

Mohamed told Mada Masr that the whereabouts of the journalists, identified as Ahmed Abdel Aziz and Hossam al-Souweify, was unknown until they appeared before the Supreme State Security Prosecution on Sunday. Their next session is scheduled for December 20.

Lawyers were not permitted to attend the questioning of the journalists, according to Mohamed, nor have they been informed what accusations the two defendants are facing. The prosecution has only disclosed that they have been detained in relation to Case 977 of 2017.

The case involves nine other defendants, including two photojournalists, who are accused of joining a banned organization and spreading false information.