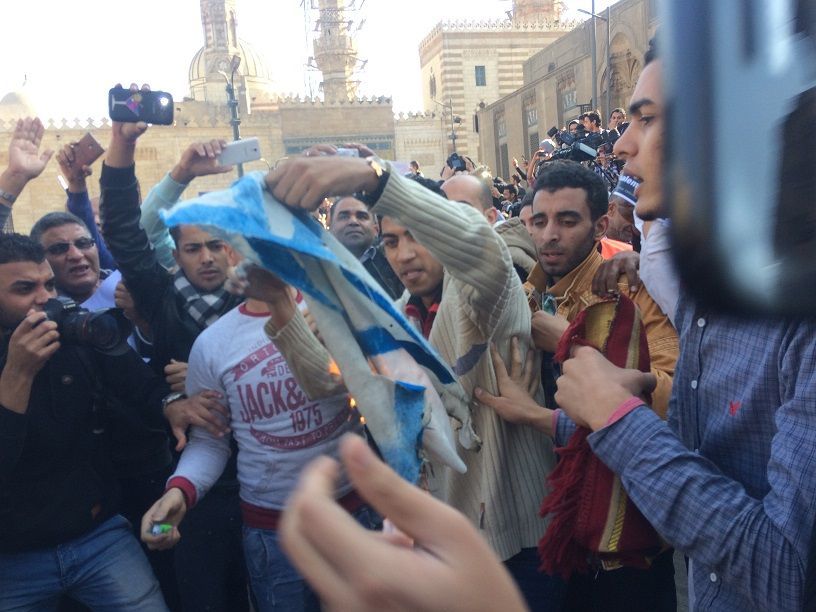 Egypt’s Interior Ministry rejected a formal notification on Saturday that outlined a planned demonstration against the United States’ decision to recognize Jerusalem as the capital of Israel.

The notification, submitted by Egyptian politicians to the Qasr al-Nil Police Station on Thursday, announced that a protest would take place outside the Arab League’s Cairo headquarters in downtown Cairo on Sunday, between 1 and 7 pm.

The rejection of the protest notification, sent to lawyer Tarek Negeida by the Qasr al-Nil Police Station, requested that organizers move the protest to the Fustat Gardens in Old Cairo, where protesting is legally permitted without prior notification.

Negeida called the decision “a coercive and repressive measure that violates the amendments to Article 10 of the protest law.” The fact the rejection was issued by the Interior Ministry rather than a timely issues judge further violates the law, he added.

Amendments were made to Article 10 of the law in April, after the Supreme Constitutional Court (SCC) ruled it unconstitutional in December 2016. Where previously the Interior Ministry could cancel protests or assemblies, now only courts of timely issues, which rule on matters which must be addressed before a certain date, are competent to do so.

The amended Article 10 stipulates that the ministry has the right to ask a timely issues judge to cancel a protest if it has evidence that it poses a threat to public security. The decision is then issued by the judge, who must provide the ministry’s justification.

“We plan to appeal the cancellation through the State Council as it violates both the constitutional right to protest and the SCC ruling that states protests can take place with the submission of a notification instead of a permit,” Negeida told Mada Masr.

The protest notification estimated that between 100 and 300 people were expected to participate, and said the organizers were willing to relocate to the closest available location to the Arab League building, taking into account the 800-square-meter legal safe zone that surrounds crucial buildings.

The rejection states that a safe zone within the vicinity of the Arab League’s downtown premises would be impossible given its proximity to several other crucial buildings.

“An 800-square-meter move from the Arab League building could have relocated us to Talaat Harb Square, for example, which we would not mind,” Dawoud told Mada. “The problem is that there is a general stance against any form of protest, even if the organizers attempt to adhere to the protest law.”

The protest was planned in response to US President Donald Trump’s Wednesday announcement that his administration officially recognized Jerusalem as the capital of Israel. This move was criticized internationally as undermining the peace talks between Israel and Palestine. Protests took place across multiple Arab countries, particularly in Palestine’s West Bank, to denounce the decision.