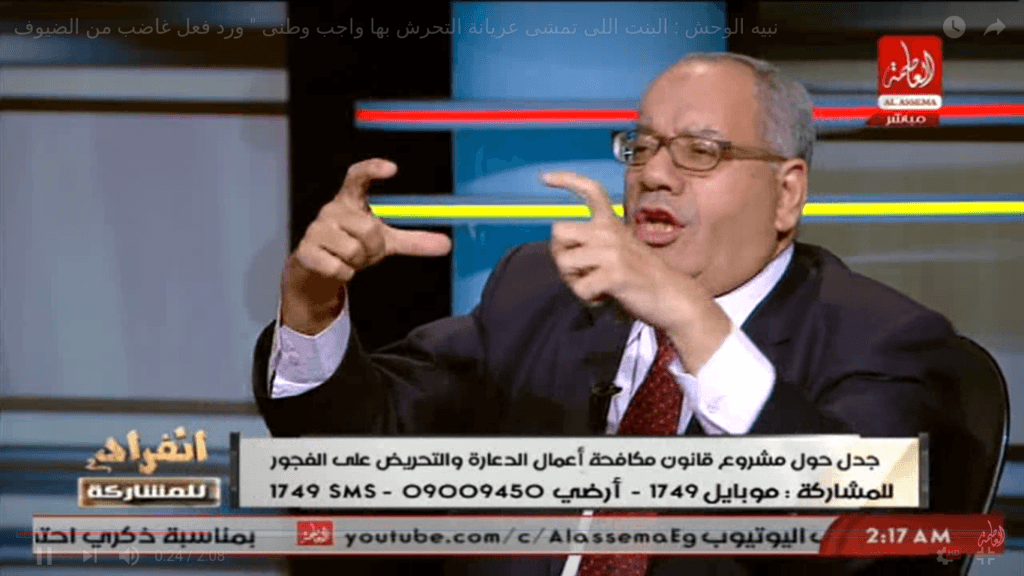 Lawyer Nabih al-Wahsh is set to face trial following inflammatory comments made during a televised interview in which he claimed it is a “national duty” to rape and harass women who wear ripped jeans, according to the state-owned Middle East News Agency (MENA).

General Prosecutor Nabil Sadek referred Wahsh to the Emergency State Security Misdemeanor Court in Azbakeya on Sunday on charges of inciting rape and sexual harassment of women through media channels and disseminating news that could undermine public security and damaging the public interest.

Wahsh told Mada Masr that he is concerned that he is being targeted by a “politically motivated prosecution,” adding that he is now “certain” the ruling will not be in his favor.

The first session in the trial is scheduled for Saturday, December 2.

The lawyer was summoned for questioning on November 22. Wahsh told Mada Masr that during the interrogation he defended his comments by saying they were intended to “alert and scare women away from dressing inappropriately.”

Wahsh’s comments came during his appearance on an October episode of the Ifrad talk show, which is broadcast on the privately owned Al-Aseema television network. “It is a national duty to rape and sexually harass women who wear ripped jeans,” he said, when other guests objected to his claims certain types of clothing should be criminalized.

After the interview, the National Council for Women filed a complaint against Wahsh and the station, accusing him of inciting rape against women and undermining public safety and social peace.

“I have been defending Islam and its fundamentals for 30 years,” Wahsh told Mada Masr, objecting to the measures taken against him.

Several of Egypt’s public universities imposed new dress codes in October to prohibit a range of fashion choices, ranging from ripped jeans, baggy and tight fitting pants and “revealing” clothes that “that evoke the desires of male students” and galabeyas, to certain hairstyles that some administrators have called “disgusting” and judge to be at the root of issues like sexual harassment or improper university behavior.