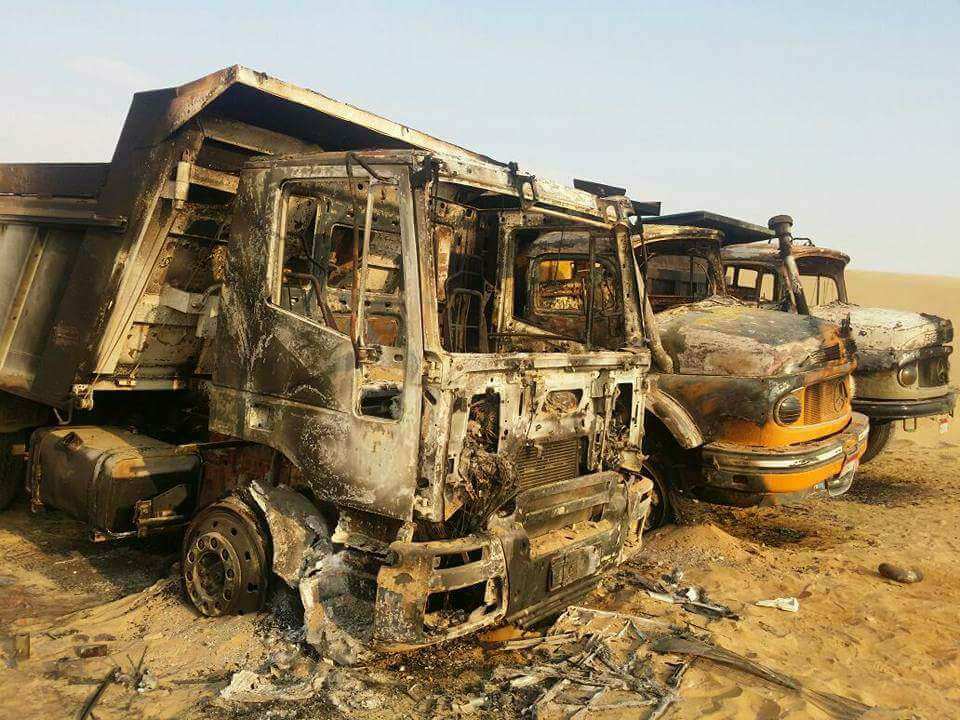 A high-ranking military delegation visited the Armed Forces’ Arish Cement Company factory in North Sinai one week after armed militants attacked contracted drivers, according to an administrative source in the factory, who spoke to Mada Masr on condition of anonymity. Following the visit, the company instituted new precautionary security measures to address the spate of attacks on the factory’s personnel.

The military delegation, which included the Second Field Army chief General Khalid Mujawar, central Sinai battalion heads and other high-ranking military officials, aimed to address the fact that contracted drivers had refused to resume work after a November 9 attack on eight trucks that left nine people dead, according to the source. The halt in transportation left tons of unsold cement stockpiled in the factory.

The new security measures limit the movement of cement trucks along the Ismailia-Awga Road from 8 am to 2 pm and mandate that the each truck should be accompanied by a security force at all times, according to the source. Contractors’ trucks must also be parked inside the factory’s premises after 2 pm.

During the six-hour permitted travel timeframe, Armed Forces patrols will travel along the Ismailia-Awga Road to secure safe passage for all vehicles. Any vehicle owned by the cement factory is prohibited from travelling after 2 pm, and factory personnel are also prohibited from exiting the workplace from the main gate after 2 pm, added the source.

The measures follow the November 9 attack in which a group of militants stopped eight cement trucks along the Hasna-Baghdad Road, a route frequented by the contracted drivers. The death toll in the attack was initially reported as seven people made up of a security officer, one conscript and five civilian drivers. However, the administrative source said that the number of those killed in the attack has risen to nine.

No group has claimed responsibility for the November 9 attack.

Unlike previous attacks by armed militants targeting heavy equipment used on Armed Forces’ construction projects in Sinai, this was the first in which civilians working for the Armed Forces have been killed.

In September 2017, armed militants set fire to more than 40 heavy construction vehicles contracted to work on projects overseen by the Armed Forces Engineering Authority south of Bir al-Abd city and near the town of Gafgafa in central Sinai. Shortly after, heavy trucks and front-end loaders contracted by the military cement factory were set on fire while passing through Mashaba.

The Province of Sinai also attempted another attack in early November, firing BM-21 Grad rockets at the factory, but the source from the factory asserted that they landed in a distant desert location.

A vehicle driven by a member of the armed civilian troupe known as Battalion 103, which assists the Armed Forces in arrests, raids and other Sinai operations, was targeted in a car bombing on Sunday, near the Zohour military camp in Sheikh Zuwayed, eyewitnesses told Mada Masr. The driver died upon arriving at the hospital.

Another attack took place on Saturday night when a masked gunman shot and killed an enlisted police officer from the Arish Third Police Station, according to a security source citing eyewitness accounts.

The North Sinai capital has seen a security crackdown in the wake of a series of recent militant attacks, including an attack on the National Bank of Egypt in Arish on October 16, which left at least seven people dead. Armed Forces and police personnel started sweeping the coastal areas of Arish and the Masaeed area in November, targeting young men aged 17 to 24 and arresting several who they accuse of being involved in the theft, the security source said.

Residents told Mada Masr that several of those arrested were later released.

The Armed Forces has continued to carry out its ongoing security campaign in Sheikh Zuwayed, turning its sights to the south of the city, specifically targeting the town of Touma and the Lattan district, which are thought to to be Province of Sinai strongholds.

Security forces in North Sinai were also put on high alert after reports circulated on Saturday that militants had infiltrated into Sinai. The Gaza-based Hamas group also arrested two people who attempted to cross into Sinai on Saturday night.