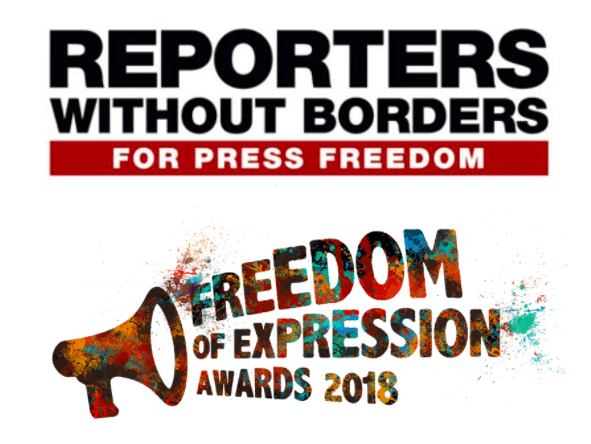 Mada Masr has been nominated for the Reporters Without Borders (RSF) 2017 Prize and the London-based Index on Censorship 2018 Freedom of Expression Award.

Mada Masr was nominated for the 2018 Freedom of Expression Award in the journalism category, which aims to highlight “courageous, high-impact and determined journalism that exposes censorship and threats to free expression,” according to the Index on Censorship’s website.

The Index on Censorship will release a shortlist on February 16, 2018, before announcing the winners in April 2018.

Winners in one of the prize’s four categories — journalism, campaigning, digital activism and arts — will receive a one-year capacity-building fellowship to “maximize the impact and sustainability of voices at the forefront of pushing back censorship worldwide.”

In its press release announcing the nominees, RSF stated that the news outlets had been selected for their “professionalism, independence and commitment to media freedom.”

“Mada Masr is a key source of news about Egypt for both Egyptian and international readers, covering sensitive subjects usually unacknowledged by other Egyptian media,” the RSF press release stated. “Mada Masr is now also censored because it strives to provide concerned reporting from an independent viewpoint. It was one of the first websites to be hit in May 2017, when the authorities began imposing a digital blackout that is now blocking access to hundreds of sites within Egypt.”

Since May, Egyptian authorities have blocked access to hundreds of blogs, proxy and VPN service providers, as well as news websites, including Mada Masr. A report by the Association of Freedom of Thought and Expression put the number of blocked websites at 434.

Mada Masr’s fellow nominees for the RSF 2017 Prize have been subject to varying levels of censorship. Al-Wasat newspaper was shut down by Bahraini authorities in June over allegations of “inciting divisions and trying to undermine Bahrain’s international relations,” according to the RSF. The newspaper has been repeatedly subject to interruptions in publication since its establishment in 2002.

The Cambodia Daily, founded in 1993, printed its last issue on September 4 following financial restrictions imposed by the government. Similarly, authorities in Madagascar confiscated the transmitter of the privately owned Radio Jupiter and arrested its founder in May, charging him with “inciting rebellion.”

While Javier Valdez Cárdenas, one of Río Doce’s founders, was assassinated in May by a masked gunman, Factum faced “smear campaigns, harassment, intimidation, and death threats against the journalists” after it released an investigative report on police corruption in August, according to RSF.

Each winner across the organization’s three award categories will be granted a RSF-TV5 Monde Press Freedom Prize in Strasbourg at the World Forum for Democracy on November 7, in addition to a cash prize of 2,500 euros.

Mada Masr was nominated for an Index on Censorship award last year. The independent website was also nominated for Raif Badawi Award for Courageous Journalists twice, in 2015 and 2017.